Why Anime and Religion? 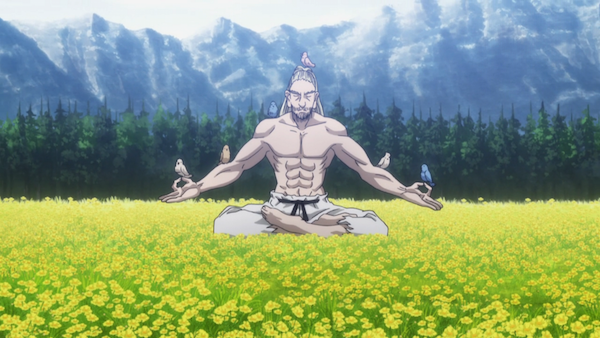 Anime and religion rarely share the same conversation. Some anime fans even become offended when anime bloggers write editorials from a religious perspective. That’s unfortunate, because it’s beneficial to talk about interactions between anime and religion on both an intellectual and a personal level. There are three reasons for this, although only one falls within the scope of this article:

1. Because understanding one helps you understand the other. This is especially obvious when Buddhist and Shinto concepts appear in anime, since most Western fans aren’t familiar with these beliefs and traditions.

2. Because our beliefs affect the way we view anime, and anime affects our beliefs—whether you identify as atheist, Muslim, agnostic, Christian, Buddhist, or anything else. There’s no such thing as “just entertainment,” although we may like to think so. If the two spheres of our lives are going to overlap anyway, we may as well be conscious about how they affect each other. It’s the most honest approach to anime—more honest both to ourselves and to whomever we’re talking about it with.

3. Because these discussions open up important conversations between fans of all beliefs. People with different religions and life philosophies too easily demonize and ostracize each other. Finding common ground—in this case, anime—humanizes the “other side.” It opens up pathways to share our perspectives on other things that are important to us.

Today’s article focuses on the first reason: understanding one helps you understand the other. Understanding the religions that appear in anime enhances your viewing experience, allowing you to appreciate themes and symbols you might miss otherwise. And anime provides examples—even if they’re usually exaggerated and fictionalized—that give the audience a starting point for better understanding different faith systems. So when you’re prepared to consider the interactions between religion and anime, you’re opening yourself to not only an enriched view of anime, but an enriched view of religious culture.

Anime titles often draw from a variety of religious traditions at once. Blue Exorcist, for example, weaves Buddhist, Christian, and Shinto traditions into a syncretic supernatural tale; Haibane Renmei incorporates Christian images while telling an ambiguous, yet purposefully religious story; Saint Young Men explicitly seeks to allow Buddhist and Christian principles to coexist for comedic effect; and the list goes on and on. But to simplify things, this article focuses on one religion at a time, using examples from My Neighbor Totoro, Hunter x Hunter (2011), and Death Note.

Shinto in My Neighbor Totoro

Of all the spiritual traditions that influence anime, Shinto is perhaps the most difficult to pin down. Its syncretic and regional nature stretches the definition of "religion." But it’s the most obvious religion connected with anime, since its traditions are so ingrained in Japanese culture, and this article would not be complete without an example. Often, Shinto traditions seem to be just habit, or fuel for fantastic tales, but many anime provide a uniquely Japanese perspective on the relationship between the sacred and the mundane. This shines clearly through Hayao Miyazaki’s films, such as Tonari no Totoro, known in English as My Neighbor Totoro.

This children’s film, though often playful, brings a sense of respect and wonder. And while the house and forest spirits, including Totoro himself, are portrayed in a fanciful way, certain symbols and rituals alert Western viewers to this fantasy’s more sacred roots.

The most obvious cue is the rope around Totoro’s tree. This is a shimenawa, and it marks it as a sacred tree that is inhabited, or can be inhabited, by a spirit. Satsuki, Mei, and their father bow to the tree to thank the connected spirit—in this case, as manifested in Totoro—for its protection. 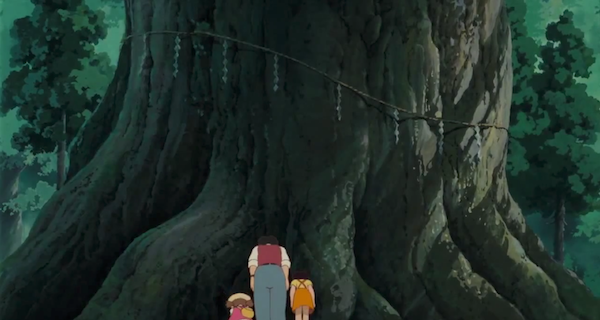 But the Shinto influence goes beyond ritual or the way Totoro and other spirit-creatures are portrayed. It comes through in a sense of reverence toward nature as a place governed by spirits, coexistence between spirit and humans, and respect for the kind-but-not-tame Totoro. This is all very intentional. The bonus features in Disney’s American release include interviews with Miyazaki that reveal an appreciation for nature that goes beyond Western concerns about preserving the environment’s sustainability or beauty.

This respect shows up in many anime, even if the director or original mangaka no longer believes in spirits the way that some still do. Because of this, anime like My Neighbor Totoro don’t only foster an interest in Shinto rituals and folklore, but convey some of the philosophy that results from it. When viewers allow themselves to process and discuss this, they benefit from a different type of understanding than what can be gained through textbooks about Japanese culture and spirituality.

Western viewers might not expect Buddhism to play a significant role in Hunter x Hunter at first glance. After all, HxH is a mainstream fantasy set in a different world—the last place you’d expect to find real-world religious references. But by Episode 125, even the most ignorant Westerners should pick up on some Buddhist imagery, and once they notice that, they may begin to notice themes that are steeped in Buddhism. 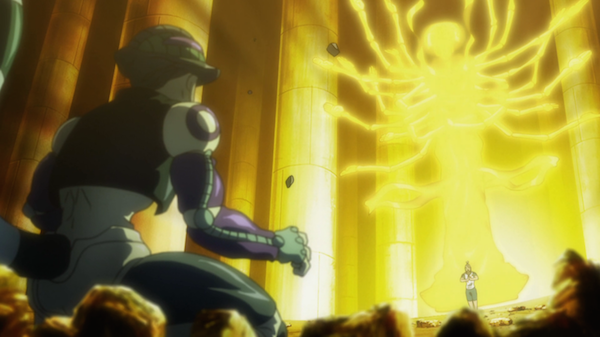 The most obvious religious symbols surround Netero, Chairman of the Hunters Association. His elongated ears are reminiscent of those common in depictions of buddhas and bodhisattvas. If you don’t catch the symbolism right away, you should notice a Buddhist connection by Episode 125. He uses his move "100-Type Guanyin Bodhisattva," which manifests in an iconic golden image.

But the Buddhist influence in Hunter x Hunter goes beyond mere passing imagery: it is part of the very premise of the show. The main character, Gon, was abandoned by his father, Ging, when he was just a baby. He wasn’t left in the woods or anything—Ging dropped him off with family—but it was still parental abandonment, all so that he could go off and be a Hunter. Yet he’s never condemned for this. Gon does not suffer for his lack of a father figure, and he does not foster resentment. Instead, he wants to learn more about the occupation Ging left him for: to be a Hunter.

This may appear to be just a ridiculous situation. Obviously, parental abandonment is generally bad, and the scenario has been contrived for the sake of a good adventure story… right? But this apparent disregard for familial responsibility is actually a part of Buddhist tradition. The Buddha himself left his wife and son to seek enlightenment. Eventually, he found a way to Nirvana, or complete liberation. This requires minimizing or severing attachments and aversions, including familial attachments.

Even if Togashi Yoshihiro isn’t drawing a purposeful parallel between the Buddha and Ging, the influence of Buddhist tradition in this scenario seems undeniable. When you realize this, you can better appreciate what otherwise seems ridiculous: a boy admiring his father for leaving him to go on an undefined search for "that which I can’t see in front of me now."

Togashi incorporates many other Buddhist themes, terms, and images in his fantasy world—ideas that require a bit more study to notice. The more you learn about rebirth, nen, and Eastern perspectives on morality, the richer your Hunter x Hunter experience becomes.

Christianity is not very common in Japan. Yet Christian imagery often appears in anime, whether through symbols and Westernized practices or deeper themes. Death Note is one example of an anime that draws from not only church icons and rituals, but specific Biblical events to deepen the story and characters. 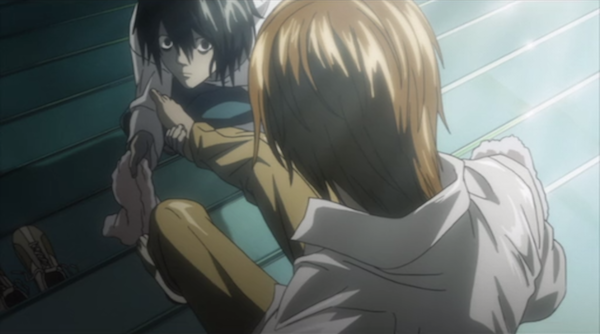 The most potent example is when L dries Light’s feet shortly before his death. It parallels Jesus washing his disciples’ feet the night before he died, including the feet of Judas, whose betrayal would lead to Jesus’ death within twenty-four hours. In that moment, Jesus not only demonstrated humility and servant leadership—he showed love to a friend he knew would contribute to his death. His feelings for Judas didn’t change, even if Judas’ had. He didn’t even try to talk his way out or use his power to escape. He was "obedient to death," as Scripture describes, knowing that it was part of his greater plan, and that he would still save humanity, even if events looked hopeless for his followers in the days to follow.

When a Christian, or someone who is at least familiar with the events leading to Jesus’ death and resurrection, brings this knowledge to Death Note, the scene between L and Light carries much more depth. It foreshadows not only betrayal and death, but also, some may argue, L’s eventual victory through his successors. The parallel between Jesus Christ and L is not perfect, but it’s enough to highlight shared attributes, such as a certain foresight, and care for friends, and a humble obedience to death.

These three examples only touch on the role religion can play in anime. Children’s movies like My Neighbor Totoro carry rich Shinto traditions. Exciting shounen like Hunter x Hunter can be experienced on a deeper level as viewers notice Buddhist connections. And even Christian motifs are used to deepen themes in Death Note and several other anime, if your eyes are open to them.

This article focused on intellectual benefits of discussing religion and anime. Most people can agree on these benefits, even if they’re annoyed that someone is making them think seriously about their "fun entertainment." However, when people take a more personal approach, these discussions pave the way for beneficial community discussions and personal growth. That’s when people become more uncomfortable and try to draw lines between religion and their sacred anime. Look forward to articles in the near future about how personal religious views—even if you’re agnostic—interact with the anime you watch, and how, when you start talking about anime and religion on a personal level, fans of all religions can start to bridge gaps and better understand not only their anime, but each other.