What Do You Think of New FLCL Seasons?: Writer's Corner

In this edition of Writers Corner, four of our writers discuss the announcement that two new seasons of FLCL will be produced. We'll also take a look at Turner (Cartoon Network/Toonami)'s hand in production, as well as other series that deserve/don't need sequels.

I'm out of the loop. What's going on with FLCL? 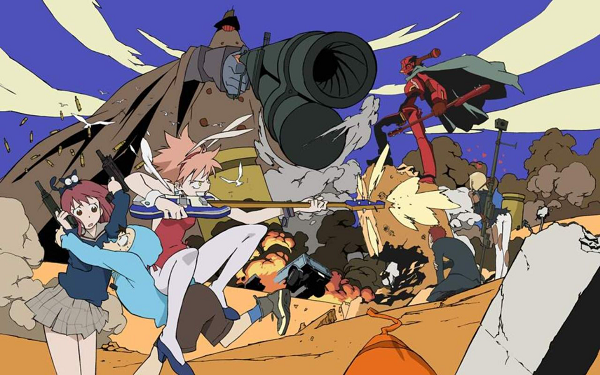 Guardian Enzo: So here’s the deal: on March 25, Toonami announced that they had partnered with Production I.G. to produce two new seasons of FLCL. Each season will be six episodes (like the original OVA) and the second season is scheduled to begin airing in late 2017. The new seasons will premiere simultaneously in the United States and Japan. Final staff/cast decisions are forthcoming, but some of the original Gainax creative staff are participating in “advisory” roles.

While many younger fans may not remember FLCL at all, among a lot of hardcore afficionados it’s considered one of the landmark series in anime history and the pinnacle of the Gainax ethos. It was released as a 6-episode OVA in 2000-2001, produced by Gainax with cooperation from Production I.G..

The fanbase, as you would expect, is deeply divided about this unexpected news. Reactions have ranged from ecstatic to indifferent to outright despairing.

Does FLCL Actually Need a Sequel in the First Place? 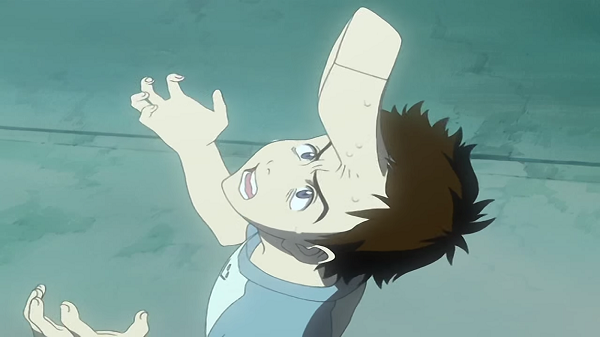 Guardian Enzo: No. Too short? Sorry... But if any anime ever didn’t need a sequel, it’s FLCL. It told a complete and self-contained story, one of the major themes of which was letting go and moving on. And it was as close to flawlessly executed as any anime of its length has ever been.

HoyvinGlavin64: Yeah, nobody ever said FLCL needed a sequel. Could the sequel turn out good? Possibly. But it was never necessary. Of course plenty of great sequels from Terminator 2 to Toy Story 2 were never really necessary, but still managed to expand upon, equal, and arguably even exceed their predecessors (with the new FLCL, I can settle for “not a disaster” if it can’t live up to the original’s heights).

5camp: No of course it doesn’t. Which is where most people’s complaints come from. Despite claims otherwise, a bad sequel can harm your image of the original. People sure thought less of The Matrix after the sequels came out, and the same with Eden of the East. Often the hint of something larger going on behind the scenes is better than pulling back that curtain and revealing the wizard of Oz was just some guy with a smoke machine. That’s not to say something thematically similar that captures the spirit of the original with some cool cameos couldn’t still be fantastic.

Kami_nomi: While I think actually seeing the characters in the city that came up with having a iron just there and acting generally ridiculous will change my mind, I never even considered FLCL could get a sequel because, for all intents and purposes, it was over. Where could it go from here? What type of story is left to be told? Needless to say, it didn’t need a sequel.

Thoughts on the premises described by Turner 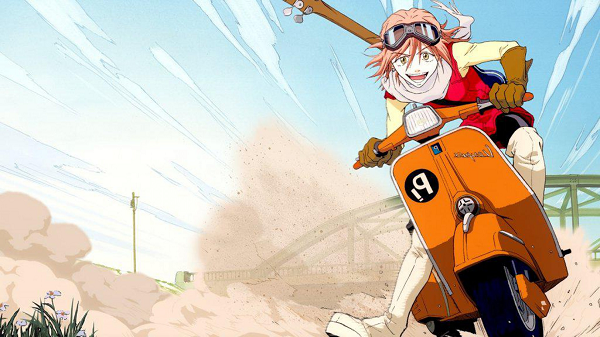 Guardian Enzo: Let me see... Horror? FLCL is the quintessential series about being a boy - this was expressed even more eloquently in the manga version (“To be a boy is to be a fool, and to be a fool is pure bliss.”). A new FLCL with a female protagonist calls up echoes of Last Exile: Fam - a disastrous attempt to cash in on a beloved anime classic by “updating” it for modern otaku tastes.

HoyvinGlavin64: I’m glad it’s not the continuing adventures of Naota. FLCL was a story about being a boy, but more than that it was a story about that awkward middle ground between being a kid and being a teenager. Focusing on Naota as an adult could be interesting, but not really FLCL. Whereas the best way to capture the spirit of the original in my mind is to tell a new story with new young characters but similar themes and style, with Haruko as a consistent force of anarchy connecting the series. If the new series deals with being a tween girl as candidly and creatively as well as the original did being a tween boy, this could be one to remember.

5camp: Tough to say. I’m with my two co-writers above in that the original FLCL is very focused on being a boy hitting puberty. It’s a very specific but very well-struck theme that spoke to a lot of people. But it is a very male story. Turning it around and focusing on what the female version of that could be sounds like as good a way as any to reboot the franchise. It’s using the same themes as the original but viewing it through a completely different lens, which is the only way I would have thought a FLCL sequel would work. Although if they were planning that, it might help if they brought some women on the staff, because the original FLCL sure as hell didn’t have any in their higher positions.

Kami_nomi: As Scamp noted, we’ll have to see how the staff shakes out since if they’re going with a female protagonist, it’ll make sense to have people who can relate to the character. But overall, I’ll have to hope Turner’s not simply bringing FLCL back just to cash in -- they understand how important the title has been to Adult Swim in the West for over a decade, and while it may not hit the high points of the original, it won’t leave a general distaste or last regrets. Otherwise, I’m not convinced this will work out well. 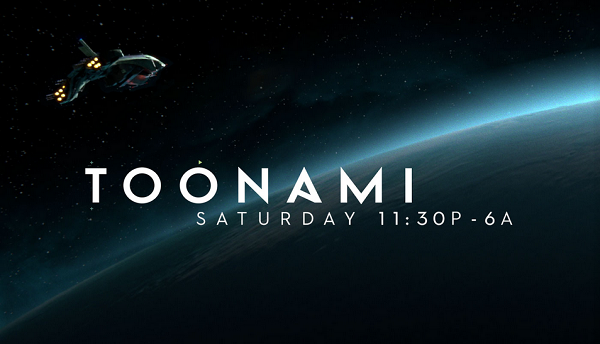 Guardian Enzo: I’m fine with Western co-production of anime, because I think it tends to favor the seinen demographic that’s produced a disproportionate share of very good anime over the years. And I think marketing to a world audience is necessarily going to foster more thematic diversity in anime than marketing exclusively to a few thousand Japanese disc buyers, and I applaud the foresight of studios like Polygon and especially Bones in trying to do so.

HoyvinGlavin64: Adult Swim’s involvement would seem to minimize Enzo’s worries about the show pandering to modern otaku tastes. While Adult Swim has had some success with otaku pandering shows (coughSAOcough), their general tastes lean away from that direction. The Big O season 2 and IGPX, Williams Street’s previous two major co-productions, might not have been the greatest anime but you couldn’t accuse either of being pandering to popular otaku trends. When you throw in anime that they didn’t have direct involvement with but still helped fund, such as Stand Alone Complex, Kick-Heart, and Space☆Dandy, the quality and idiosyncronicity jumps up. FLCL season 2 and 3’s quality is a big question mark, but I’m cautiously optimistic.

5camp: I’m not sure Space Dandy would have been made without it, and Space Dandy was bloody brilliant so I’m all for co-productions. It also produced Afro Samurai and Witchblade, which isn’t quite as much of a ringing endorsement (all right, some people like Afro Samurai), and I don’t think Dimension W pleased a lot of people. But on the whole I haven’t seen any real negative impact. I’ve seen people express fears that western influence will halt the Japanese-ness of anime which is exactly what draws people to it in the first place. But these companies knows this themselves and are just trying to push Japan in the direction of the parts of anime they know sell well in the west. It’s not like these co-productions are going to kill moe girls.

Kami_nomi: Just in general, Turner seems determined to bring back titles that was received very well (shout out to Samurai Jack), so good on them for doing so. As for Western collaboration in general, I’m conflicted. We’ve gotten some great standouts in the past few years because of co-production (Space Dandy, Kick-Heart), and the idea of Western companies like Netflix and Turner getting involved with anime means they’re at least taking the medium seriously after years of disinterest. But usually doing a co-production means the cost of anime has gone up, so what happens if it fails? If following the right people mean anything, Dimension W was the definition of a bust, but sales will come out on that over time. Could this have a negative impact on the industry at large? As there hasn’t been too many co-productions it’s hard to say, but since that’s the way the industry is trending, we’re going to find out sooner rather than later.

What other beloved anime do you think need/don’t need a sequel? 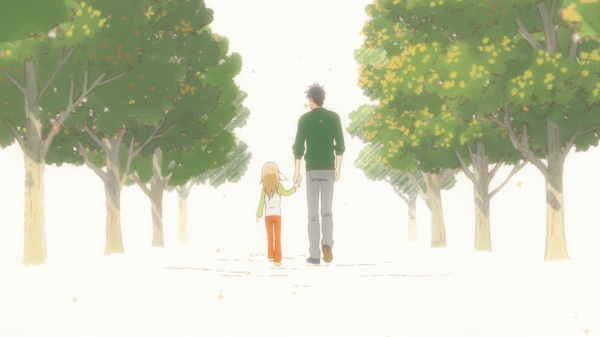 HoyvinGlavin64: What anime don’t need a sequel is a list that could go on forever (certainly Madoka didn’t need the movie sequels it got…). As for anime I would like to see sequels for, Deadman Wonderland and Princess Jellyfish are the two that cry out most for continuation. Panty vs. Stocking would also be fun to see made a reality and not just a GAINAX troll ending. More Fruits Basket animated would be appreciated, but at this point I think a full remake would make more sense than a sequel given the major shifts in tone between Daichi’s anime and the later parts of Takaya’s manga.

5camp: I would really like a Moyashimon sequel. Shame they never made one.

Kami_nomi: After finally reading it last year I’m pretty sure that we never get the Usagi Drop sequel because I’m convinced no one’s interested, especially Production I.G and noitaminA, in seeing the world burn down.

HoyvinGlavin64 Don’t even mention an Usagi Drop second season! I’d started that manga and was loving it when the anime started, so when all the preview guides were all “It’s cute now, but if it follows the manga this will end really creepy”, I was baffled. How could something so sweet and innocent but also smart and mature end up creepy? And then I read the spoilers and… yeah.

Guardian Enzo: I’ve been blogging for about five years now, but I’ve been an anime and manga fan for a lot longer than that. Having been lucky enough to live in Japan has only cemented my love for the country, its culture and people, food and history.

5camp: Writing about anime on the internet for the past 8 years, and has a soft spot for absurdist comedy and mecha. But it was only this year that he found an idol anime he actually enjoyed. S-E-K-K-O, B-O-Y-S, SEKKO!

Kami_nomi: I began life as an anti-social genius, but somehow this extended to starting an anime and manga blog. After literally relying on TV to watch most anime, once I got my own laptop and started a blog, I took the media that I liked more seriously, and do what I can to support it.

HoyvinGlavin64: I’ve been a fan of anime since Spirited Away blew my mind 14 years ago. I’ve written film and anime criticism for various websites and graduated from the Bard College film program last spring, where I somehow convinced Neil Gaiman to act in my senior project, “The Making of a Superhero Musical.”