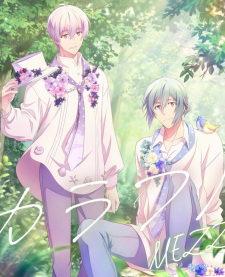 MaicolThePigeon May 27, 2:11 PM
late congrats for reaching 1k watched anime! (idk why i'm feeling like an bot but congrats)

Erixsen May 18, 9:57 PM
Yeah, the new ending was kinda generic, but it did make sense that someday Paradis would get destroyed, but it also made the terrifying Rumbling worthless.

Nintendofan204 May 16, 10:47 AM
I googled her 😅. Funny how certain characters can randomly get so much artwork. Someone probably just liked her character design and drew her, and then a domino effect just started. I'm not complaining...

I went up 10 pounds during the last month of the semester. Just graduated yesterday. I joined a gym last week after finishing my final assignment and have gone a few times already. My mom and brothers also joined and we plan to go like four times a week. It's only a five-minute drive away, so it is easy to get to. Hopefully that can not only help me burn fat and build muscle, but keep my motivated to eat better. Ever since I lost my job at a gym (where I was allowed to work out) I have had a harder time controlling my weight. I think I need a gym to keep it together. Working out at home sucks and neighborhood walks only do so much.

Oh, cool. Why is it called "The Murph"? Is it named after someone?

Nice. I'm enjoying Atelier Ryza so far. Now that I'm done the semester I will have more time to play it. Very chill game and the main girl is cute AF. I already knew who she was since I've since a ton of art for her. I thought Atelier was some online gatcha game or something though lol.

Hmm, I'll send you a request. I did disable random messages, but I thought I still allowed friend requests. I'll check on that.

Yeah, online messages get way deeper. We cut through the surface level bullshit and actually talk about real things since we care less about judgement from people we have never met. I want to try to do that more in real life. I have cared less over time what people think of me and speak more freely now. I try to be careful that I do not become mean, but I think it is important to be more open. I've gotten tired of hiding the real me and presenting a more palatable persona.

A good setup is great to have! I can't wait until I have my own place and can do the same.

I wouldn't even know what people think of it. I disabled scores and ranks a while ago with uBlock origin since I'm not interested in seeing other people's opinions of anything I watch (or play). I can form my own opinions. If I want to know what to expect out of a show, I will ask someone who knows my taste and can make a decent guess as to if I will like it. Or I will watch it and stop if I am bored to hell. There are plenty of anime I like that don't have good reviews and plenty with good reviews that are meh to me.

For example, I hated Redline, but it is one of the most acclaimed anime movies. I also have never been the biggest Ghibli fan (though their movies aren't bad; I like a few of them a good amount). I also didn't care for One Punch man at all. I found it boring and unfunny with an unlikeable MC. I'm the same way with music. Most of the stuff I like is pop music that a lot of people (especially American men for some reason) would think is garbage, but I don't care. I would never make fun of someone for liking something I dislike. I am actually happy when people like something I dislike. So if I hear someone loved Redline, then awesome! I am glad that someone was able to appreciate the art of the people who worked on it, cause I can respect that a lot of people put hard work into it. I don't understand why people can't be respectful about other people's tastes. So many heated arguments would cease to exist.

So I disabled scores cause I don't want preconceived notions about how "good" or "bad" something is when going into it. I also ignore any "controversy" cause everything causes controversy these days. I find people on the internet so sensitive. They need to grow a pair, honestly. That last statement would probably piss a lot of people off, which pretty much proves my point... I don't mind ruffling the feathers of people I have never met. As long as I am not deeply hurting people I care about, I will speak my mind.

As for Nagatoro, I am liking it a lot so far. It is kind of like Takagi-san in a way, but different. Nagatoro fucks with the MC like Takagi does, but she is more aggessive with it, and the Nagatoro MC is more shy and quiet than the Takagi MC (I forget both of their names...). What I like about Nagatoro (and Takagi!) is the way her relationship with the MC develops over time. There is more to her than is apparent right away. I would recommend it to people who liked Takagi-san and don't mind a girl who is more dominant and is into shy guys and don't mind a show that is not as laid back as Takagi. I'm not really into dominant women, but something about a kouhai taking initiative appeals to me... Overall, it definitely wouldn't be for everyone, but it is my favorite of the three airing shows I am watching this season. I look forward to it every week.

27_Seconds May 13, 5:17 AM
Tell me about it. There are a lot of jokes in the Ghost Stories dub that would never fly if it was a new show coming out now.

I see, which games have you been playing recently? I really only play video games during the weekends these days. Been taking my time with the Resident Evil 3 Remake. Have you played it?

I never bothered checking out Black Clover since I've heard mixed things about it, plus battle shounens like that are usually hit or miss for me.

Revisiting classic anime is always a good idea! Usually, it allows me to realize that shows I saw years ago are way better than I remembered. I enjoyed Trigun when I watched it in high school, but I think it's way better now upon rewatch. Same thing happened when I rewatched Neon Genesis Evangelion like three years ago (might even rewatch it again since it's now on Netflix, haha).

Erixsen May 8, 2:00 AM
Yeah, Cloverworks really messed up this year, even Horimiya was rushed.

Erixsen May 7, 1:28 AM
Atleast you gave it 9, I've seen many people who rated it 1 or 2 just because of the ending, most of them probably AoT haters. For me everything was okay, but I didn't like how there were few plotholes left, that's why I rated it 9.

Erixsen May 6, 9:07 AM
Hey, did you finish reading chapter 139 of Attack on Titan? If you did, then what are your thoughts on the ending?

Erixsen May 3, 4:39 AM
Oh. I didn't there were Anime watching challenge in MyAnimeList.

Erixsen May 1, 1:48 PM
Well, I have encountered your comments in many forums. Among them some were controversial and among all the replies your ones seemed very logical to me.

You see, gaming is still something that I can enjoy. Maybe because I try not to overdo it with how long I play video games a week (with my current schedule, I can maybe play about 3 hours of a game a week). I have been watching dubbed version of Ghost Stories, which has been pretty fun to watch since it's episodic and the dub's script is filled with dirty jokes, lol.

Yeah, I'll probably wait to catch with AOT until it's finished as well. Not that I need to binge a show in order to enjoy it, but I would still rather be able to watch a show at my own pace. Keeping up with seasonal anime can be exhausting after awhile.

Have you been watching any other good shows recently?

Eyefushion Apr 18, 6:17 PM
Sounds like withdrawals lmao well i watched lots of anime before joining mal and most of it were just broken episodes (the t.v. Series kind op,slamdunk,yu yu haku etc...)and lots some that i have the intent of completing but only watched halfway thru and suddenly forgot. So im glad i found mal
All Comments