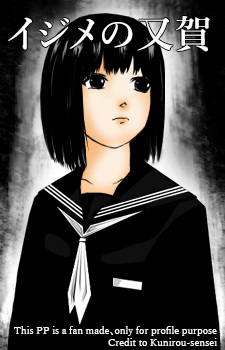 Denji Jun 16, 9:52 PM
Honestly, the less submissions and requests people are making, the better. If an entry in the queue has problems, then we'll fix them when we get to it; it just takes a while to get to any individual entry because we're understaffed and the backlog is very long. If you want, you can bring the entry to our attention, but your mileage may vary depending on which mod you pester.

HappyPicnic Mar 6, 5:00 PM
Anonim I recognize you from forums! Man it's been a while since you'be been online. Great profile!

AngryAkko Jan 4, 3:03 AM
I found another great and cheery teacher on here like yourself! I'm really glad people like you guys are on here. You are molding the future generations!

AngryAkko Jan 2, 9:42 PM
Thanks for accepting my friend request! I can tell that you are an amazing teacher just from your warm kind hearty posts :)

TellPatel Dec 25, 2019 3:54 PM
The creativity of this profile brought back my faith in humanity.

Timz0r Dec 22, 2019 8:38 AM
There's still a hole in ozon layer, but it's not located over Indonesia. I've never heard before about a hole in the ozon layer above Indonesia. I'm aware there's one above Antartica and it's still out there. Sure, it apparantly shrinked compaired with circa. 20 years ago which is for the moment a good thing, but it's still out there. It's treu that near the equator the ozon layer apprantly a bit thinner than normal and the cause is assumed aswell, but your teacher was iether misomformed, didn't get it at all or did a terrible job back then. Science doesn't lie. It corrects itself when it's proven wrong. Science doesn't have an agenda unlike politicians. You wanna listen to liars and decievers with an agenda? The worst part of it all is that most people will believe it all that bullcrap. Most people are still stuck in that sheep mentallity and then they dare to complain why they have a shitty life. You want to listen to other liars and decievers that promise things will get better? Politicians lie, decieve and steal all day to gain votes and power. I've never seen a politician etc. admitting they were wrong. The only good politician is a dead one. They only care about the contents of their bank account and the ammount of power and control over people they have. People really need to get out of that mindset that humans are above everything else. Because we're not. We're nothing more than a bipedal primate that's ruining their own spine because of walking upright. We may be clever for a primate and done some great things, but that's it. We're still the main cause of a mass extinction that's currently is going on. There's no reason to deny this. By the time most people finally snap out of this retarded mentallity by rather believing politicians that get rich by lying than actual scientists that gain nothing from telling out the truth, it's already to late. The damage is already done and it will only get worse over time.


That's actully quite cool. Who knows there are any other of those paintings in other caves that are now below sea level. What were those humans thinking back then? What was the reason why they did this? So many mystery. Pretty cool.

Timz0r Dec 21, 2019 6:19 AM
Yeah, I also had my assumptions that cold was caused by weather isseus. It should officially winter for now over here, but recently we're back at 10 degrees celcius on average. Even at night. Do we get snow? Heh, when I was a kid, snow was a much common thing during winter, but nowadays, not so much anymore. I only expierenced once a "HOWAITO KURISUMASU" aswell. It really shows the signs of human induced climate change and I'm very worried about it, because way to many people think it's not a thread at all for the continuation of our own species even though you have all the scientiffic papers & reports just under your own fingertips if you really want to and if you know a thing or two about mass extinctions. When even insects are on a decline, it's a bad sign for sure.

I assume it's overthere again the "warm and dry season" again? :-O

Yeah, you're one of the few Inonesian people I've talked to, but you just happend to pop my mind first because I knew for sure back then. Well, Indonesia does have some important finds that did contributed to paleontology. You know, those Homo erectus as coined finds on Java as coined "The Javaman" that became a worldwide report and such. Don't know all of them, but there's alot known about prehistoric Indonesia aswell if I browse through some papers of it.

Ah yes, but some knowledge about extant creatures also comes in handy for sure. Personally; it's also one of my big interests. Every now and then I watch some documentary just for the heck of it so I can admire how beautiful and cruel nature can be even though being locked down into a concrete jungle hive where I should not belong to. I also didn't know that Java is being the most civilized island. But now when I've seen some pictuires, I'm actually baffled. Like Jakarta for example looks very New York like. Wow.

Timz0r Dec 19, 2019 2:33 PM
Oh, don't worry about it. I'm pretty much trough it. It was similair like an "anime cold". You know, those colds where you're almost on the verge of dying, but a docter or a hospital is not needed. Just a lot of rest for a few days of good rest. :-P

Well, after that small accident, they have gotten a small introduction how minerals and gemstones are formed and a introduction into mineraogy and how our museum operates by the vice president and after that, I was giving my moment to shine how fossils were formed and give a small introduction to paleontology. I was nervous as hell because I never had spoken before against a class of 25 kids. I stuttered, kept forgeting names. But I think I did well for a first time. If you give some attention to the obvious quiet shy ones that were paying attention the most, they will admire you like you're some sort of superhero. Was a fun learning expierence. After that it was luch break and we seperated the class in 3 for the museum tour.

Our fossil collection mostly exsists of invertebrates of mostly western Europe and North Africa. Shells, gastropods, ammonites, belemites, brachiopods, other mollusks, coral, shark teeth, a bunch of mostly identified mammal bones from the Eurasian Megafauna from the Pleistocene like Mammuthus primigenius, Coelodonta antiquitatis, Ursus spelaeus, Megaloceros giganteus, ... an almost complete male H. sapiens skull nicknamed George of uncertain age (we don't have the money to carbon date it) that lies symbolic at the end of the fossil tour through time, a dinosaur egg, mosasaur bones, fossil wood, ... But we do have oddities like a stromatolite (cynobacteria) from Australia of 2+ billion years old as I sort of recall and two fossil wood tree pieces from Java from the Pliocene that I haven't identified yet but it's already registered. When I registered those fossil wood pieces, it even made me remind somehow of you for a bit! :-P


I'd say visit an used book store or a libary if you can. I'm sure you would find something already. A visit to a local natural history museum or such also can help wonders, because they could probably help you even further. But I'm pretty sure you can find some books to help you out already a tiny bit. The book that I still have and aqquired when I was a kid that's quite good for a beginner is *this one* where it visually with text gives you information how fossils are formed, some differnt types of preservation of fossils, a short geological time chart, where to look for fossils in what kind of rock layers, how to collect fossils, how to prepair your collection and how to maintain it etc. After that you have nice visual guide of fossils wordwide all grouped within the biological group to have an idea in which group your found fossil might belong to. I'm a visual learning guy myself, so yeah.

As you progress trough the who know new hobby and you get more advanced into it, I'd only start worrying about eventually learn more about biology, taxonomy, ... and such. Species pretty much get identified because of the location and the rock/sand layer where they come from. That's why it's always so important to write down the exact location where you have found your specimen. The more exact where that location is where you have found that specific specimen, the better. Without that information; most of the time your specimen will be scientifically worthless because trying to identify a fossil without any location data is nothing but guess work and thus mostly a waste of time.

Aha, I see. That's understandable. But fun to hear you're already doing something else productive and since I sense no complaints, it's allright I guess... ^^

Hmm well, in an idealistic world, I could see myself getting married with a feminine woman for sure. But since I'm a slave of reality, I doubt that will ever happen. Most woman these days, especially here in the the western world are much more masculince than most guys over here and it disgusts me. It's not attractive at all! Can't tell it's like that aswell in other parts of the world, but still most woman over here, yikes.... Marriage, especially over here in the western world, really has no benefit when you're the man. I really do not want to be that yes dear-type of kind of guy. These so called "men" really lost their balls and their spine long time ago and they know it. Love and marriage is one big lie. It's all fairy tales that the media, movies and songs tries to sell to us. The gouverment is way to involved with marriage and since the laws are not really male friendly, you're basically putting a gun to your head if you decide on getting on one knee for some woman while your own wife has control over the trigger. I've seen it happen with my dad and I've seen it happen with my step dad. Being raised in a single mother household is not fun at all because it will leave nasty scars in your development into an adult. Yeah, simply put; I really feel marriage is out of the question.

Haha, well, it was not that much of a disaster - which is lucky for us. Only one small piece (some sort of black mineral I really don't know what it is but that's allright, since I'm one of the Paleontology Department after all) got damaged before we could say "Don't touch anything!" No real big horror story this time. It could have been worse. But indeed, corals are indeed soooo diverse; it's mind blowing. But then again, if you realise the first corals appeared (atleast when people have found fossils from that epoch) during the early Cambrian period it's no longer a big suprise why they are so diverse.

I did notice you indeed was no longer active anymore here on this site for a long period, but it's fun to read you're still doing OK. As long you like what you're doing even when doing a carreer switch, it's A-OK. What made you do that switch in the thing you do now? If I'm allowed to know of course.

This guy is INFJ. He will be on my blog: https://myanimelist.net/character/3085/Akisame_Koetsuji
All Comments