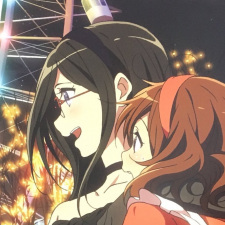 CoquiXV Oct 17, 2018 6:18 PM
You basically summed up most of my general thoughts. Regarding the art and animation, I have yet to see another anime that comes close to the pure ecstasy that is Rebellion. When I first watched the film I did so at around 1:00 am and was very tired but nonetheless wanted to know what all the fuss was about since its known for being very polarizing. The point is that it was probably the worst scenario for the first watch of Rebellion because so much had happened and I was left with the biggest headache ever with the nonstop insane animation. Any symbolisms, foreshadowing and subtle details basically flew over my head completely and gave it like a 6 or a 7 feeling disappointed. I have never taken hardcore hallucinogenic drugs before, but if you told me that it feels like Rebellion then I would totally believe you lol. It took me around 2 or 3 more watches to help me understand some of the things I missed before and end up at a conclusive opinion.

The ost is also one of the biggest things that I love as well. I agree that it is probably Kajiura's best stuff, maybe the Kara no Kyuokai is one of the few things that come to mind that could rival. Personally, I'm a HUGE fan of the tracks Flame of Dispair with my favorite having to be This is My Dispair which is up there in my top tracks in any anime. Speaking about that ost, my favorite scene would have to be Homura turning into a witch which honestly sends chills down my spine every time I come back to it. Even though the movie has a lot of heavy exposition scenes (Homura and Kyubey's conversation comes to mind), the movie shines brightest when it leaves what's on screen and the voice acting do the talking. It carries a lot of weight and is a perfect representation of the feelings Homura is going thru. Apart from feeling hopeless and depressing, it has certain symbolisms and visual callbacks to other things that add up to how fucked up everything is (examples are the pastel flowery setting, the twin chairs side by side, Madoka falling off her chair and dissolving into pink goo as Homura fails when she reaches for her, how when the scene starts she's the "original timeline" Homura with the glasses and in the middle of trying to save Madoka from her fall transforms into post-wish Homura, then a bunch of disproportionally long Homura's looking down at her as they add an unsettling vibe to the scene, Homura breaking down frustrated by her failures, and culminating in her trying to at least grasp that feeling and not even being able to, showing how intangible her inner demons are). It is truly a phenomenal scene and there are quite a few more that I could just sit and try to dissect because there's so much in it. My second favorite would have to be the very last scene which I also love, to the point that ever since I watched Rebellion and I see a half moon I am reminded of it. I have a few theories for what the ending actually means, but I won't get to them because this already is too long of a comment lol.

I've seen Rebellion around 8 times as well and I could watch them 8 more tbh. It has so much going on that it gives us fans the opportunity to catch new subtleties each time. As far as rewatchability it is up there with FLCL imo. About the ending, the first time I watched it I was very skeptical, and for good reason. I wouldn't say I hated it, but it really took me a couple of days of thinking about it to even know how I felt. Now I love it and believe it serves its purpose of reaching true levels of subversion. Since the beginning, Madoka was trying to be subversive of the genre, and Rebellion endings adds a whole new dimension of subversion because it subverts the movie itself. Some consider it shock value, but the point of this story is exactly to subvert expectations. The movie simply would not have been as good as it is if it wasn't for this plot twist because that plot twist adds a clever meta element (I would even say self-awareness from the part of the creators) by making a climax after the fake climax that is the battle against witch Homura. The film would feel a bit underwhelming without it and it wouldn't be true to Madoka's themes and Homura's character to have everything be a happy, fluffy ending. If it was going to have such a generic ending, then everyone would have to ask themselves if everything the series set out to be different was even worth it.

As I said I have A LOT of thoughts about basically every scene and I could go on forever. I'm glad to see some people love it as much as I do. Anything else regarding another scene or the things I mentioned is welcomed, I love having different perspectives and interpretations. : D

CoquiXV Oct 5, 2018 6:49 PM
Hello there! Respectable tastes I must say. I don't see many people who like Rebellion that much. For a long time, it was also my favorite anime. Can I ask what do you find so interesting about it compared to the more beloved series? I'm curious what others have to say since I have a lot of opinions about it.