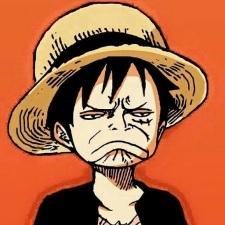 ToG25thBaam Aug 13, 2019 6:54 AM
My experience with One Piece is pretty much just like yours, caught up to the anime around early Marineford, I knew about manga (not One Piece specifically) back then because I did own a couple of Naruto manga volumes, but it never did occur to me immediately that there could be a manga for One Piece, so I pretty much followed One Piece through Marineford and only started reading the manga a little later, though it didn't take me long to figure that out. I remember the hype following the time skip and the 4 weeks break in between.. and when the first post time skip chapter dropped, I just couldn't hold back my excitement. I remember Oda made a mistake in drawing Zoro's scar on the wrong eye and had to retcon it a chapter later lol. I am fully caught up with the manga right now, and have been selectively watching the anime.. Wano so far is unreal in the anime, if the quality keeps up, it may even be better than the manga.

It's been really, really long since I've watched Hikaru no Go, I think I've watched the series twice so far, but have only read the manga once (from where anime left off until the end). In most cases, I'd go with the anime if it's as good as, if not better than the manga counterpart. I am a huge sports anime junkie but for some reason, I am not as invested in sports manga vs sports anime. I love Oofuri and Chihayafuru a lot for example, but have yet to catch up to the latest manga chapters. I figure it'd be the same with Hikaru no Go. I like manga better usually when it's shoujo romance, or shounen action, that's why my list is filled with shoujo romance haha

I tried playing Go as well both time I finished the anime, but gave up after a while as I have no idea what I am doing most of the time lol, but it's really fun though.

ToG25thBaam Aug 12, 2019 9:10 AM
I really appreciate the long post too.. and I also get it, manga is just quicker to consume compared to anime. As much as I love Hikaru no Go I haven't had the opportunity to read the manga yet from the very beginning (same with One Piece even though it's my favorite manga of all time) and I just continued from where I caught up in the anime.

As for Hikaru no Go, the anime does a little something extra at the end of the episode where there's a Go master giving simple Go lectures to get the viewers familiarize themselves with the board game, which is really awesome. I don't know if the manga does that, but that might be something you want to look out for if the game doesn't make a lot of sense to you.

I contemplated on reading it from the very beginning vs rewatching the entire series, but I like a lot of things about the anime, like the soundtrack, the colors, and also the sound of the Go pieces being placed on the board, the tapping sound is like music to my ears xD

Thanks for the friend request too, and no worry about the late response, sometimes I get off MAL for a couple of days too when I am not looking up anime/manga related stuffs.

ToG25thBaam Aug 10, 2019 11:19 PM
wew seeing a Hikaru no Go post came up in recent thread (from your comment) makes me want to read the manga from the very beginning! Haha just wondering if you don't mind, is there any reason why you read it instead of watching the anime? Most fans of anime/manga prefer watching anime but going by your anime/manga count you seem to be more of a manga-person.

Hope this is not too sudden or rude to knock on your door out of nowhere.