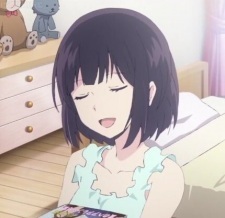 
I finally finished my Review in Re: Zero


Here's my full opinion of the anime compress in this link: https://myanimelist.net/reviews.php?id=335912 hope you check it out.

Ezekiel_01 Jan 17, 2020 2:21 AM
People still like it for even it is an absolute BS. They even try to depend it that it make sense! Even thought it absolutely make no sense a cute girl doing absolutely no strategic effort or you know believable action to even make her deserve the power up in the first place/ The author just gave her all the Overpowered Skill to accelerate the more faster than your any typical Isekai Video Game Anime. I can't believe this show even made Shield Hero somewhat in comparison a decent a show atleast Objectively speaking Nafomi deserve his skill since he grind like for weeks and days even resort to slavery just to survive and SAO even look good even it isn't since Kirito actually took months or a year to reach his Beta Male Status even thought it sad the show could be better if there are more Beta Players. Yes Itai no wa Iya nano de Bougyoryoku ni Kyokufuri Shitai to Omoimasu simply Bad. It's lazy and stupid. I can't even enjoy it even if I pretend it's just a cute girl anime that you don't need to take seriously. After the battle royale the show have the balls to take itself seriously, it's not like Konusaba that's it's funny and not taking it self seriously. No this anime is treating itself seriously. I am better watching Log Horizon since that show tries to make sense on why some players better and there are more good players which is really relatable in Online MMO's

Ezekiel_01 Jan 16, 2020 5:28 AM
Itai no wa Iya nano de Bougyoryoku ni Kyokufuri Shitai to Omoimasu is pretty ridiculous and to be honest I see this anime horrible.

Green Jan 17, 2018 1:09 PM
Always great to meet a fellow Zipang fan! I just started reading the manga since the English translation has been picked up again (it was your trhead you made saying it was picked up about 2 years or so ago that inspired me to actually get around to reading it). Most underrated anime of our time, I hope one day the whole franchise get's thew appreciation it deserves.

What Got You Interested In Anime? :3
What is your favorite genre(s)? :3
What's your favorite anime if you had to choose one among all your anime? :3
What anime(s) are you expecting most from on this season? :3
Are you the type to only watch anime once or do you not mind rewatching a anime more than once? :3
Do you listen to Anime OST (if so which anime)? :3
Do you think you’ll ever stop watching anime? :3

You can ask me of anything in return :3
All Comments