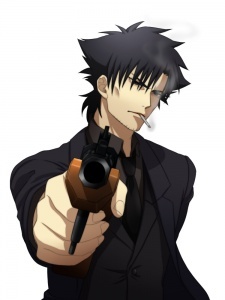 Hibbington Sep 23, 2018 11:05 PM
Greetings zachfoss, I recently gave you an invite to a seasonal club called the Anime Guild.
But I do also like to interact with the people I'm looking to bring into the club.
The club consists of a lot of different seasonal activities from Power Rankings to OP/ED Comps to Seasonal Cards.
*If the invite doesn't go through just message me about it*
What is your favorite brands of beer?

dubjunkie Jul 29, 2017 1:16 AM
You are the president aand founder of Empress primary example of the yag alliance Federation

animangafreak_ZX Feb 5, 2017 4:24 PM
So, what are your thoughts on planning to read Shinyaku Seisho??? Anyway, just let me know, and cool avatar.

Ai Tenchi Muyou! (I love Tenchi Muyo and have seen all of the other ones)
Gintama (Because its number one on MAL)
Mushishi Zoku Shou (The first season was great and they finally made another two seasons, but no dub...)
Bakuman (Because they actually dubbed the first 7 episodes or so but then the company wen't bankrupt)
Usagi Drop (Heard good things about this one)
Yu Yu Hakusho Movies (They already dubbed them, but I want a proper FUNimation dub with the same VAs)
xxxHOLiC (Because they only dubbed the first season and movie) P.S. Please do not smoke too many cigars. XD

ManiTaku94 May 1, 2016 10:00 AM
Yeah, digital only series do tend to piss me off too.. Though recently the Freezing manga got licensed. Previously it was digital by The Seven Seas, and now it's released by print. They did that with many other different series, especially with One Punch Man from SJ long ago and now the prints are released daily. So I think eventually they'll release print volumes on Sekirei for us later on, but that's just me being optimistic

ManiTaku94 Apr 30, 2016 3:58 AM
Thus I heard in therending of the manga has a proper ending as well too that isn't so rushed either, I think eventually I might make a poll for people who want a certain manga or light novel licensed too.

List of manga from me:
- The World God Only Knows
- Heaven's Lost Property
- Kenichi: The Mightiest Disciple
- To Love-Ru & To Love-Ru Darkness
- GetBackers (got cancelled after volume 27 in TokyoPop)
- Kuroko no Basket