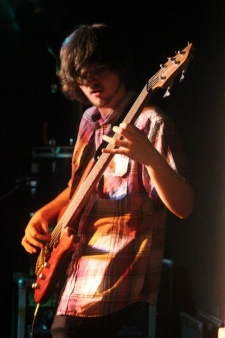 DoshiDile Aug 11, 2015 9:54 AM
Done with Ashita no Joe 2 as well. Damn what a ride. I think it was far better than the first season. Have you completed it yet? It says you're still watching >_>
Anyways I'm sure you know how it ends, since it's one of the most famous endings ever. Tell me, when you're done, we need to discuss it! ^^

DoshiDile Aug 3, 2015 5:23 AM
Finally completed the first season of Ashita no Joe! Started the 2nd one, and I adore the artstyle! Probably one of the best I have ever seen, counting both old and new anime!
I have also seen Katanagatari, so I guess I've watched both shows you've reviwed! Hurry up and make a new one, so I can watch that one too! :)

Yeah, he touches on some same-y, accessible, popular stuff. Which makes enough sense in order to gain the most viewers. But, heh, now there's your channel to make up for that lack of variety in the Youtube Anime Community, eh?

Damn, badass. You were so close to the stage! Good thing for the earplugs, I don't think I could handle a Swans concert with virgin ears, heh. Haven't heard To Be Kind and don't know when I'll listen to it, but I'll get around to it eventually.

Hope your enjoying yourself my man, I look forward to you next video.

Excelsior Jun 23, 2015 9:02 PM
Yeah, AnimeEveryday is all right. He's one of the better youtube anime reviewers (imo the whole scene is pretty bleak aside from some few exceptions). Haven't seen any Matthewmatosis yet but I'll check him out.

How was the Swans concert??? Did he play stuff from his newest album, from The Seer, from his older stuff? I've heard that they're almost unbearably loud live; how was that?

I'm currently watching Bubblegum Crisis with a friend, 2 episodes in, quite fun so far, its super 80s. As far as its category in cyberpunk, it feels much more like Cyber City Oedo in terms of its pulp vibe.

I changed my avatar to Christopher Lee since he passed. I hope I can live to his age, what a great actor.

I've finished the intro to a big project im doing, though it may be just an episode 0 for time being.

Thats around a good price, will put that on my to buy list.

Think a live action Hokuto no Ken, except with guns and cars and more Australian accents.

I went to MCM London awhile back and it was pretty fun, I got some DVDs from the Beez booth back when they were still in buisness, I was able to get some books and movie programs for Laputa, Akira and From Up on Poppy Hill and got to hold a buster sword, which was lighter than I had anticipated.

Klonoa7H May 28, 2015 11:09 AM
Hows Ashita no Joe 2 going? I've seen clips of it and the animation quality look very nice, especcally compared to Macross, which looks way older by comparison.

I'm considering using postcard memories, since it's a reference to Dezaki and makes sense in a way, since I plan to review alot of old school anime films, OVAs and TV series. I'm hoping to review Space Adventure Cobra or Black Jack by Dezaki, since I've never seen them before. My brother has been teaching me bordering techniques in adobe, so that should come in helpful for reviews.

I look forward to it, I want to get a Blue Yeti mic which should be pretty cheap.

I saw Fury Road with a friend yesterday, dude, get on it, its one of the best action films to come out of the past couple of years, so insane, dont even think about waiting for a blu ray release.

BTW, I have a good idea for a show name. Welcome to the Star System, which is a reference to Osamu Tezuka's star system. I've also considered postcard memories.

Excelsior May 18, 2015 10:46 PM
Very very cool. I like the "youtube doesn't have the content I want to see, so I'll just make that content" mentality. Respect. I'm way too lazy to do that kind of stuff. But yeah, you're right -- the only reviewers who focus on older stuff are, what, Bakashift? And only a handful who take an analytical approach? Looking forward to your next vid.

I'm doing OK. I'm done with my semester so I'm at home for the summer. Gonna watch more anime, more movies, read more books, and maybe do other stuff like take my GRE, get my license, and volunteer for stuff. How are you doing?

Well, if I do a show, I'll have a windowbox of the show on the right, while I have another box so I can show the actual promo picture such as keyart or DVD boxart.

How about Suicide is Painless? I can see that fitting an AMV. Speaking of supporting the industry, I recently bought Space Adventure Cobra from RightStuf, which looks like an absolute blast, plus it has Yuji Ohno music, so its bound to be fun.

Alot of those 90s shows with ostentacious sharp harsh lines I find hard to watch, oddly enough. I know Slayers and Tenchi Muyo are popular, but I cant stand those shows designs, and thus I've never looked deep into them.

https://vanishingtrooper.files.wordpress.com/2012/03/034-garou-densetsu.jpg Speaking of terrible character designers, this is Masami Obari, I like his mecha but hsi characters look like insects.

BTW, I've been practacing Adobe premire, and I did a Gundam test video I can send it over wetransfer if possible.

One thing i think u should continue in your reviews is having the track names up when they start. :)
All Comments