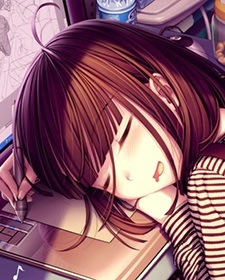 fluffsnake Dec 4, 2014 3:20 AM
I'm finally up to date and dayum, the rest of the manga would be splendid in an anime! Mostly because there's lots of action and funny stuff related to Guts & Co. :D

linnaes Jun 23, 2012 8:30 PM
lol yup! Tbh it's a bit too long. In return for chilling for so long, the entire curriculum gets crammed into a shorter time frame that'll give me plenty of headaches later on XD Not to mention I'm gonna be terribly unproductive this summer >.<

But anyway, yeah! College is great. Sure my marks are a lot lower than in high school and everything is harder, but it's generally more fun too :) I'm in engineering right now (going into mechanical eng. for 2nd year), so hopefully I'll land an engineering job in the future XD

And yeah, mostly chilling for me as well :D Lots of sleeping, anime, clarinet, piano, and working out so that I don't take injures from excessive playing >.<

60sRock Jun 5, 2012 4:55 PM
Hmm well, I liked the first half better than the 2nd half. Yeah sure the plot wasn't all that interesting in the first half, but that's when the characters' personalities shined the most. It was relaxing and plain fun to watch. BUT, that's not to say I didn't like the 2nd half. We got to see a ton of development on Okabe's part, as well as the development of his relationship with Kurisu. I felt as though some parts in the 2nd half were VERY unnecessary though. Most notably, the couple of episodes where he had to "undo" the text messages with the multiple girls (Feris, that guy/girl, fb freak) strayed a bit from the excitement/intensity of the main plot. The ending also wrapped itself up a bit TOO nicely, but that I can forgive. I still couldn't help but smile :) So all in all, great series with, as you said, great characters. Definitely glad you recommended it to me!

XiaoLaine Jun 5, 2012 12:40 PM
If you watch animes made by CLAMP, I think you will find Tsubasa Chronicle interesting since the characters they used there are from their past works. It's a crossover with really good story and plot. However, the anime changes drastically after the two seasons. The plot will be a bit confusing during the OVA, so I'm suggesting starting with the manga to be able to appreciate the plot more.

It's a good anime. One of my ultimate favorites definitely. Also, it has a really, really good soundtrack.

XiaoLaine Jun 4, 2012 12:39 PM
True. The damsels in distress helpless princess characters are very cliche. At times, they tend to get annoying especially when they're stupid. But Inoue Orihime had her powers and she pretty much stood up on her own. (She's gotten better. Don't worry.)

Sakura of Tsubasa Chronicle is a helpless princess and she's still lovable. Have you seen that yet?

XiaoLaine Jun 4, 2012 11:28 AM
Hello (-.-)/
I just want to say: DAMN, I TOTALLY AGREE! MAL SHOULD really have a Hated Character List. It's a must!
And I share your hatred towards Yagiri Seiji. He's a nut. And yeah Itou Makoto! That manwhore deserved to die.
But I have to disagree with Inoue Orihime. She's adorable. O.O
Why hate her?