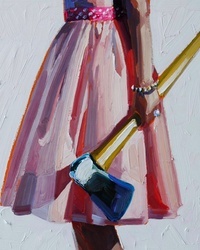 Anyway, I hate a lot of anime tagged as harem too and a lot of guys my age would rather watch Playboy or X-rated stuff on cable TV instead. Japan may not have age barriers over entertainment, but I see Japan airing too many shounen anime these days, which are as predictable as Saturday morning cartoons. Like my older friend Megane on AP, I also have a love-hate relationship with the shounen demographic. Besides! I want more of manly action anime, not battle shounen (do I look like I'm 10?). Animation on average may be funny, but I want more of that dark or vulgar humour.

How long have you been watching anime for? Your overlap with mine tells me you have nice taste but I'm a pleb compared to you, so maybe it's meaningless haha.

Thank you for acknowledging OG FMA as superior to FMA:B. :D

Yeah Tada-kun is a pretty straight forward rom-com with not too much melodrama. Good practice for Japanese language I've been practicing with. I've also taken a back seat anime wise, Steins;Gate 0 was the only thing I watched last season. Violet Evergarden and Wotaku are also up there for good watches.

Still have to sit through the original Gundam series to check out the rest of the series, been trying to check out more space genres and this is my wall to the rest of an otherwise more realistic approach to space operas.

Goober-fish Oct 2, 2018 11:21 AM
I don't drop shows no matter how egregious they are, I think the only drop I have is Pokemon and that's only because I grew out of it and couldn't really be bothered to stay caught up considering how behind I am, I'm a massive completionist. I typically have a pretty good amount of shows to chew on in any given season but it looks like I'm going to be pretty dry until this first wave of new shows kicks in so I'm trying to comb through my backlog while I have a chance. Started watching "That Time I Got Reincarnated As a Slime" and it was perfectly fun which is more than I can ask for in a show of its ilk. I typically consider myself I pretty big anime nerd...but you've got an impressive list, that takes dedication and time.

smachadofiorillo Oct 9, 2017 5:29 PM
It´s ok, glad to be friends :)
Which one are you favorite psychological anime?

CCS is such a classic! I never get tired of it!
Are you reading CCS Clear Card-hen?

CirceOwO Oct 25, 2016 11:20 PM
Yes! I love Serial Experiments Lain owo it was the most plot twisted amine that I ever watched~ xD

I am awesome? OwO? lmaoo yeah shoujo always end up with annoying and frustrated feeling in the middle of manga XD hmm why did I feel like I watch the kdrama from this plot? I hope korean didnt adapt this manga right?

same D: right now im trying to marathon all anime I on-hold.. I still feel soo many anime I havent watch yet D: many things to do QAQ
All Comments