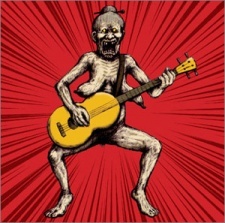 Banjo-Fella Aug 22, 2010 4:41 PM
Ah yes, he definitely succeeded! Shinji's journey in the series probably represents what Hideaki Anno himself went through. I read somewhere that he used tell himself that he "must not run away" whenever he was under tons of stress, for instance when he was trying to finish Evangelion. It's a great exploration of personality and isolation, too - it seems like the AT fields are symbolic of the barriers we put up to distance and protect ourselves from getting hurt by others. The hedgehog's dilemma, as the series says. =p And then we see Shinji and others struggle to keep a sense of self once that barrier is broken down by Instrumentality... I actually had a bit more respect for Gendo after that. He may have been a scheming Machiavellian and a horrible father, but he was trying to achieve something beautiful by bringing everyone together, even if it was for selfish reasons. I suppose it just shows how good Evangelion's characterisation is - you can dislike a character but still find things to admire!

I feel like watching Evangelion again now, actually! There's so much depth to it! I watched it once by myself and then again with my brother and I noticed all sorts of things I had missed, and certain episodes made more sense. You definitely need to have a strong understanding of the main characters to get the most out of the ending, especially in Shinji and Misato's case. Hopefully I'll enjoy it even more next time! =p

5 Centimeters per Second is brilliant! The artwork is just mind-bogglingly amazing all the way through it, you could probably end up pausing it at each new scene just to take in all the detail. =p It's a very sweet story too, simple but powerful, and there are are a few visual metaphors running through it that are so good! I'm excited to know what you think after watching it!

Banjo-Fella Aug 11, 2010 2:15 PM
Haha, oh yes! The good times are imminent. :P I love watching Lain! It's fantastic, I find I can really relate to Lain as a character... during her earlier days with the Wired, at least. And I really like all the visual and audio cues suggesting the omnipresence of the Wired. Just two episodes left to watch now, so I'm excited. I'll definitely need to watch it again and make more sense of it, though!

Can't wait to talk to you about Evangelion, too! Man, I love the last two episodes of the series. Really great exploration of Shinji's mind, and the perfect ending in the form of him breaking out of his shell both literally (seeing as he reunites with everyone, either within Instrumentality or in the physical world, it's hard to tell) and emotionally. Also; ROBO ACTION GO! Which is always good. =p