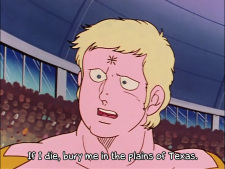 the ORIGINAL Sickie, AKA Sick_Bastard

Some anime is better dubbed. Most isn't.

I don't mind dropping anime. If it just doesn't interest me or is too long, I won't waste my time on it.

My favorite genres are Mecha, Sci-Fi, and Shounen. I mainly enjoy anime from the 80s, 90s, and 2000s but I will watch stuff that was released recently on occasion.

I will NOT watch an anime that heavily (30%+ of footage) utilizes CG. I think it's lazy, lacks imagination, and is done mostly to cut corners. In addition to that, most anime CG still looks like an early PS3 game with a low budget despite it being (insert current year).

Yup Jul 17, 9:21 PM
Space Cobra / Votoms, my dude. Great 80s gems. Def get around to watching them when you can. I think you might need to drop your discord info or readd me?

Yup Jul 14, 3:51 PM
Getting by the wage slave life. How're you man, I added you to discord I think? Then never heard from ya. Assumed it was the second death of sick_basterd. Thought it'd be another ten years before I can get a hold of sick_basturd on mal lol

Tyestor Jun 11, 7:50 PM
yea hidive is pretty based for a streaming site.

Tyestor May 24, 11:52 AM
Hahaha, it was no big deal to find the old convo, all I had to do was click 'conversation' on your old profile. Easier to re-build rapport when we've got a starting point. Not everyone gets to be a forum legend, you should be proud.

>As far as LOGH goes, it is on Hold for the time being.

>I have a distaste for picking up series in the middle that I've mostly forgotten.

The random more recent show you watched was the remake - Die Neue These (The New Thesis), on crunchyroll. It wasn't too bad, but it's no OG. It follows the novels pretty accurately but the thing about the OG....is that the OG is far better than the novels, and the novels are fucking good. There's 24 episodes of the remake out at the moment and that covers the same time period as the first season of the OG (26 episodes), but the remake somehow feels more rushed with less content. It's actually truly remarkable how they managed that. Its just too bad that the remake character designs look like Kuroko no Basuke characters, because I did enjoy it, it reminded me why I fell in love with LoGH.

Here you go bro, for OG LoGH legal stream specifically: https://www.hidive.com/tv/legend-of-the-galactic-heroes - It doesn't have the legendary, elitist approved, Central-Anime subs, however. The HiDive subs are still good, though (no foppery and whim in this script though be warned). But I know I know...paying for chinese cartoons? Fuck that dogshit ass bullshit. So...

I've watched a bunch of Gintama and I can't stand it. I can't understand how it's shotgunned all over MAL's top list.

As for Kags...Hmm, I don't think he was groomnig you. I just think he was a weird mofo that liked to play vidya and chat on IRC with his weeb friends. Oh and sorry but I don't think I was very clear in my last comment. This "Wonder what that weird fucker is up to now." and this "There's still a ton of groomers on this site so at least that aspect hasn't changed." were actually replies to two different things and weren't connected, so I wasn't insinuating that Kags was a groomer.

However, there are 100% for definite guaranteed bet my mother's life on it groomers on this website though, 10 years ago and today. All you need to do is look at some profiles: underage girl, creepy comments written by dude/s in their 20s and somehow these people are friends and the girl is responding in kind (probably also through PMs and maybe even on discord/skype). But those are only my observations/unfounded comments.

Tyestor May 19, 9:10 PM
Haha, fucking Kags Krew. Now that's some MAL lore right there. Wonder what that weird fucker is up to now. There's still a ton of groomers on this site so at least that aspect hasn't changed.

Oh and our last conversation was in 2010*, not 2012 (I think, we probably interacted on the forums). Here it is: https://i.imgur.com/rOoERyX.png

Which reminds me, why haven't you finished LoGH yet bitch? You're going to make old man Baman sad.

Mywifesson May 18, 3:24 PM
Miller Lights, 96 calories per beer. It's very good cal/ abv the only thing higher is natty ice but they dont sell that around here because its too "low brow". Beer with more hops like IPAs have a higher alcohol content but alot more calories and phytoestrogen and proportionally alot less alcohol. Thats why people who drink IPA are typically beta long necked no chinned nerds.

keeteezy May 18, 1:27 AM
You got the whole squad laughing with that one bruv.

Mywifesson May 17, 6:51 PM
i only drank 29 beers this weekend. Uuuu my stomach. By the second night I couldnt get drunk anymore at all. Just couldnt break past buzzed no matter how much I drank. Also went through 3 tins. Then I beat off today thanks to the estrogen from the beer. UWU

Yeah you should definetly not put anything in your ass that is fucking gay as hell dude. Did your gf know you did shit like that? Women pretend to be cool with gay shit like trannies but once they get it in their actual lives they dont like it at all unless they are degenerate harlots. Shoving shit up your ass is definetly not a line to put in your tinder profile.

shit sure has changed around here in the last 10 years, so many newfags, the forum culture is completely different. not many oldfags left, and the ones that are don't really post on the forums. not even sure if you remember me since it looks like our last conversion was in 2012 (about logh apparently), but we posted a lot in spam (which is not 'forum games' and ruined). do you remember any of these people? we were all spam posters and i was in a skype group with some of these people.

https://myanimelist.net/profile/owell11 (changed his name when he left mal, can't remember his username but people just called him kags)

+ more that i can't even remember

oh and apparently the phrases 'what the dix' and 'JULAYY' were popular in 2010.

anyway, this is making me nostalgic for the good old days. so many fucking people i used to talk to on this dogshit website that are now gone.

cluclu May 12, 5:23 PM
he sent a lil speech about how women are selfish and how if he was one of the last few people on earth he'd know it'd be his job to repopulate etc, etc and how he wouldnt repopulate with black women but he'd still have sex with them cuz blah blah blah it was funny but i still reported him for it just to see what would happen

Ironically I drink alot now but don't jerk off, i've cut it down to the weekends only and only 2 days but I weigh a whole bunch so it takes me a bit to get drunk. I drank 30 beers this weekend uwu. I can feel it start to effect my body, I never black out or do anything I regret I just have a good time, the problem is the gastrointestinal effects, the lack of rem sleep, and I can start feeling the effect of decreased circulation even though my RHR is in the 40s. My hands are going numb. Yeah its time to stop completely for me for a while. I also need to lose like 7% bf to get back down to having a 6 pack and making fun of people on /fit/ which i cant do as a strong fat.