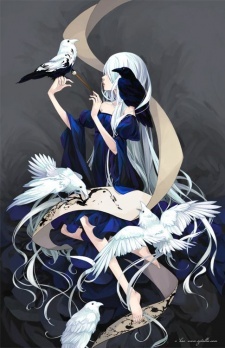 They basically both keep that hilarious general feel of, "laugh your ass off whist simultaneously watching a somewhat gay/lesbian/straight weird concoction of comedy."

Both are set in fantasy type worlds where the main characters are basically otakus. Even though Outbreak Company is definitely more light hearted, I feel they share the same type of comedic approach. Also, cue cutesy maids. Did I mention they both have adorable maids?! Seriously, Myucel and Rem, just, just thank you.

Both somewhat involve "games" that contribute to the main plot of the story. (Granted Ibitsu's "game" is more along the lines of an urban legend, but you still have to answer a question in a somewhat "horror game right or wrong type spiel" so I'm gonna count it.) Both titles love to horrifize (That's not a real word, but you get what I'm saying.) cute animals, throw in a yandere or two, and really give hell to the poor main character.

Even though Super Lovers happens to be a yaoi while Shounen Maid is not, they both happen to deal with relationships between an older and a younger male family member.

Both involve a character from another world entering one filled with fantastical elements.