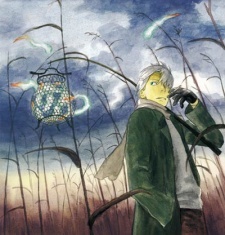 TheSubtleDoctor Nov 1, 2010 6:34 AM
Yeah, he is a tool. Sure, he is reverting back to the only kind of political leadership he knows (from his childhood village), but still, he is straight up annoying and clearly in the wrong.

He'd be right up there with Lin Minmay from SDF Macross as my least favorite character.

ich1990 Oct 18, 2010 12:45 PM
You better be watching TTGL, because I heard you liked gunmen so I put a gunmen in your gunmen so you could drive a gunmen while you drove a gunmen.

ich1990 Sep 17, 2010 10:42 PM
Quantum is indeed awesome, although I admit that I don't really understand it all that well. One book that I found (and got a few chapters into) and really need to finish is:

It sounds scary, but it is actually written for curious laypeople without a background in physics at all. I would highly recommend that one. Feynman is practically a god in the physics world, a step behind Einstein, so he is fully qualified.

That AMV is a cut above the rest. While in some spots it seems to degenerate into rapid, random cuts from chunks of the movie, the rocket part and that bit at the train crossing (both young and old) were executed flawlessly. That is how an AMV is supposed to be people.

I need to watch 5cm again.

ich1990 Aug 21, 2010 8:54 AM
Trust me, I have thought about watching it long and hard. My only issue is that it seems to have a significant amount of fanservice. There is a review on CAA, but I have heard there are other "issues" as well.

TheSubtleDoctor Aug 13, 2010 9:17 AM
That awesomeness will exponentially increase as you move through the series. Kamina is not gone...he lives on in the hearts of the characters. Trust me when I say that his spirt looms large throughout the show. Yeah...I felt weird w/ Forehead-kun in there as well. And by weird I mean very angry =). We all know whose seat that is, sir...please get up. Viral rocks! He has an important role to play, so do not fear.

If you are looking for another series to pick up, I recommend the seven episode Giant Robo OVA. I watched it dubbed on youtube, and it was a pretty awesome dub (villains had accents). Everyone else I have talked with has watched it (and enjoyed it) subbed however, so take your pick. Give it a little while to grow on you: it is a very flavorful show and pays homage to a lot of older-styled anime, so it is a little difficult to get into.

ich1990 Aug 6, 2010 2:46 PM
TSD comforted me as I cried and assures me that the show recovers. Frankly, though, I am not convinced that such a thing is possible.
All Comments