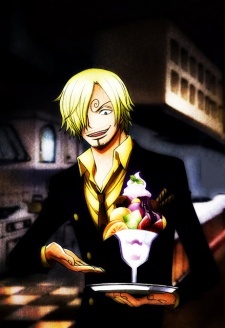 GodspeedK Aug 25, 2015 12:56 PM
Update caught up to DB super currently there is 1 episode that has bad animation the rest is just solid. it's basically just the 2 new movies, but then tv series style and afterwards a new arc.
Since DB is the reason I started watching anime I'm going to continue it and it's fun to talk about it with my friends that normally don't watch anime.

if they license holyland I hope they release a special boxset with posters or something. Though unfortunately it's pretty unlikely

DB Super has been pretty enjoyable, but I'm only at episode 3 haven't watched anything while I was on holiday only read some manga while traveling, so I can't really tell you how it is now xD (THough I did see some pics of the animation on fb looks pretty bad xD)

GodspeedK Aug 1, 2015 4:45 PM
Hey I've been looking for some peeps that I have extremely high or higher compatibility with and I thought I'd say hi. Since we have such a high compatibility we should talk sometime ;)

Holyland fan *_* wish they'd lisensce the manga in english would love to own the series.

Alejandro13 Jul 31, 2015 3:00 PM
yeah and also he is unkillable(Kaido),yonkou captured him and he didnt die,maybe he has a type of devil fruit that makes him resistant to pretty much everything idk.I was happy too that the other half of the crew was shown. what do you think the next arc is going to be?

Sure, I love answering questions :), please keep in mind that my main language isn't English, so there might be some issues here and there.

To be fair, I can't really say if Nagi no Asukara is something for you, simply because we both get different experiences from it. I, myself was not really into romantic/drama kind of series at first but after watching Sword Art Online the romance really flew into me. After this experience I decided to give a pure romance/drama series a try, and that's why Nagi no Asukara took me by surprise.
Honestly the story gets more intense, 'the love' gets more complicated, but at around episode 13-14 something happens that people consider to be the reason why the series is so good. If you find the series to be average up to this point I am not sure if you will enjoy the rest of it, but that's something for you to discover. If you want more information ( Including a few spoilers ) feel free to ask :d. Without spoilering to much I hoped I answered your question.

And yeah Shokugeki no Souma is also an anime that took me by surprise, I never imagined that a food based series was so intense yet funny yet exciting.
There are still ecchi moments throughout the entire series, however not as intense as in the first few episodes.

Anyhow, thanks for asking the questions :)

velkaq Jun 27, 2015 7:55 AM
Whoops.. It's been 7 months since your message. I'm really sorry it has been so long. I got caught up in school and I just was too busy and lazy to survive and I was under so much stress so I forgot everything non-school related. So anyway this last month I got a summer job for a month and aaah finally it's over and I can start my vacation (spending my time at home watching anime.. and maybe once in a month opening my window and blinding myself because the real world is so bright and not so anime :((( )

So I see you haven't watched any further Psycho-Pass 2 since your last message. I read your comments on it from your anime list and I'm really surprised since I remember the first season being really good. I probably won't watch the second season if it's that bad D:

I can't remember much from SAO2 but I agree that the first season was a lot more interesting. I made myself watch it though, it was really hard to concentrate on the second part. And yes it does concentrate on Asuna, it was pretty interesting to see her side of the story but SAO is more action and Asuna was all feelings and fluffy softness girly crap xD (not that I dislike these things but if I watch an action anime I want some action instead of drama between Asuna and a side character that in the end has no impact on anything).

I also noticed you watched Owari no Seraph. How was it? My friend wants me to watch it but I'm kinda repelled by it.

Well yea to be honest it is kinda depressing but "Finland is one of the most well educated countries in the world" blabla and everyone keeps holding on to this and doesn't want to change the system. Oooh, Asian Student Association sounds real cool. Do you have a lot of different clubs in your school? And do these clubs kinda cross a line between the students?
Beta Club sounds really useful, we do have some what the same activities here but most of them are after 4pm and I'm usually just too tired at that point. But the good thing is that these activities are not necessary here, they're more like a slight little bonus.

So 3 electives, do you have a lot to choose from? Are there any arts? And are sports necessary for you? :0 sorry for the questions, I'm just really interested in the differences xD

Have you watched any anime from this season? I haven't but I started Dragon ball and I like it a lot!! As a little kid I used to watch Z or GT (don't remember which one) occasionally on TV but I can't remember anything from it so I thought why not watch it. I was kinda getting bored of all these short animes and the only longer anime that I'm currently watching besides db is Naruto and I already know how Naruto ends so I'm not so interesting in watching it at the moment.

Doflamingo45 Apr 24, 2015 7:47 PM
I really do think I will go blind and watch the anime only. It is true the good stuff will be dragged out, but then I can just go enjoy it in the manga after I’ve seen it in the anime.

Good to hear the One Punch Man has epic fights. Can’t wait to see how Madhouse is going to do it.

Yeah, the manga doesn’t have anything on the anime. That doesn’t take away that Togashi is still a genius. He still came up with everything. Yeah, the Killua vs Youpi had me sooooo hyped. The eyes and then godspeed for the first time. Plus I had to wait another week to see what would happen. Just one of the many things that killed me with HxH.

Yeah, I don’t dislike any OP arc. I still love all of them, just because it’s One Piece. :P It’s just out of all of them, Fishman felt a little disappointing. Also the fact that it was a really creative island, yet it was as you said just used to show off how strong the Straw hats had become.

I can’t wait to see what the future holds for me. It will be very interesting indeed. Yeah, don’t worry about everyone being amazing. I had more then a few friends in the class that were on my level or even worse.

Yeah, if you’re into comedy and cute girls then defiantly check out Nisekoi. So Soma is now confirmed to have 24 episodes. It’s easily one of my tops for this season, so hearing that news is great! Can’t wait to see all the characters and their wacky personalities. I’ve compared the look for the food to the manga, and the anime easily wins. The anime literally makes me hungry. It’s the first anime to ever do that to me. That bacon potato dish he made in episode 1 made me sooooo hungry. Yeah, YYH is indeed awesome, not on that HxH level though. I liked Hiei out of the four. Also I’ve finished YYH, but have decided to put Gintama on-hold. I’m now watching Katekyo Hitman Reborn. (I have a list of shows I want the GF to watch :P). I’ll probably pick Gintama up when the new anime finishes, so it can be a complete marathon. So both you and Chibi say it’s HxH level? Well the that means I will be 100% watching it, can’t wait! It took a while for me to convince myself to watch it. A lot of people were telling me it’s only comedy. But then Chibi said it did have serious scenes and they were really damn hype.

I miss high school, but don’t miss the homework. :P I’ll be getting that homework again when I start college though, it’s going to be such a drag. I’m going to have literally no life starting May 3rd. I got a factory job so I can make some money before school. But damn, it’s night shift (11:45 pm - 8:15 am), and I only get Friday and Saturday off. It’s going all the way to August. It’s going to suck big time, but at least I’m making around 1200 a week. :

So yeah, I’m a tad delayed replying as well. I’ve already seen the new chapter, and obviously you will have seen it to. I didn’t like the look of it at first, but it quickly grew on me. I LOVE how he can retract his hand into his arm for a much more powerful punch. But.. Doflamingo is still tanking these attacks. A direct blow to the face from Luffy’s kick attack seemingly didn’t do all that much. Doflamingo just got up, dodged and attempted to kick Luffy. Doflamingo isn’t going down like that, there’s no way. I bet he’s got more tricks up his sleeve. Plus there's a theory that Doflamingo has a demonic side to him when his glasses come off (https://www.youtube.com/watch?v=f5nIdcPQjlk). If this is true, this fight is going to be so damn insane. I can't wait! :D
All Comments