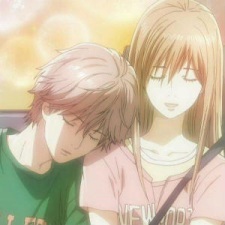 Nunnally03 Apr 8, 2017 3:44 PM
I am not quite sure about the changes in Taichi...
Especially because his grades are dropping to the point that his grades now belong to those groups who actually failed.
I think he's more likely being rebellious? doing the same thing that Sou did by not letting himself get controlled but let themselves controlled by him.

Part of the reasons why I didn't like it was because...he was judge and called different names. His haters called him manipulator, bully and all. So Taichi was trying to prove them that he isn't, that's not him.
Although I also don't think it was bad and all, but it kind of condradicted what he's been trying to show everyone all this time.
But all I could think about this chapter from the last one as well is probably Suetsugu's way of telling her readers not to judge easily. I knew that Taichi will be harshly judge by this...seeing those comments in kissmanga...so I think Suetsugu must be planning something for him.

Another reason is that... Sou is Sou. I was in a hurry to post in forum before any Arata fans can say anything lol but now I have a lot of things going on my mind for this chapter.

Yeah...it's impossible for them to have a match this year. But honestly, I see it as another good thing for our ship :D
I thought if there will be Yoshino tournament this year, then Taichi's possibility of becoming the Meijin will raise.
But if not, then it's an additional point for our ship.
Because I believe that between Arata and Chihaya. Taichi will have to beat Chihaya first. So we might get Yoshino tournament next time - a way for Taichi to beat Chihaya.
But this hiatuses is making me impatient (T____T) I wish I have a time machine so I can just see what's going to happen lol

Yes I like Hong Kong ^_^ although I couldn't really get used to their food hehe.

Nunnally03 Apr 5, 2017 3:52 PM
LOL I was in HK as well and SG, which parts did you go? Maybe we actually crossed each other's path without knowing haha. I spent most of my time in Nam Shan and Sunset Peak. Glad to hear that you had fun, it's always fun traveling with friends than to travel alone.
But few days ago I was just out in another city.

Yes, I thought that maybe Chihayafuru was getting boring - especially with all of those hiatuses that happened last year and Taichi missing in action, but every time a new chapter is out, it still look as exciting.

Yeah I am surprised that Sou took a copy of the USB - although he did that thinking that it's okay because Sou just let it lay around but still...that's bad. Good thing Chihaya told him about it, I was touched knowing how much he loves karuta though. Although there is a big chance for him to become this year's representative, I will feel bad for him if ever he lose to Arata hehe.

Yes, chapter 178 is one of the best chapters so far...Shinobu was really touching..although I hope she will not lose her unique side.
Chapter 179.... I've got mixed feelings about it, I think Taichi might get bashed by his haters again - although I rarely see those immature fans of Arata lately so maybe they will stay quiet( I hope)

I know (T___T) as a Taichihya shipper, watching that movie was painful for me because of the way they portrayed Chihaya's feelings. ( ;___; )
The actress who played as Shinobu is really cute and for some reason, she really looks like Shinobu lol - not to mention she's also left handed. Although the actor who played Hyoro is the one closest to the character he's playing for (in terms of face haha)
Me too, although I have some doubts that the movie will be able to show it as deep as how it was in the manga..
I honestly am interested to know who's going to play as Sou as well hehe.

Nunnally03 Mar 10, 2017 3:30 PM
Yeah try it, you may find the first part of the episodes a bit boring but the rest is just so hilarious.
Wow, I am surprised because most people didn't really like the second part of the movie.
I didn't like how they made Chihaya look as if she's in love with Arata (T___T)
But Arata and Shinobu's time together made me ship them a bit lol. They look so good together - especially because they look alike.
Yeah, I heard the third movie will show the outcome of that match.
I wonder if they are going to include the whole confession and rejection scene though.

I didn't like You like in April as much...it's just overly dramatic for me and I'm not into that.

Thank you for the compliment (∩__∩)

The first time I saw it, I seriously thought it was just a fan-made. I wonder why it ended up like that >_< although I put the manga on hold for a while now.

Gintama and One Piece are both funny. Gintama is more of a gag anime so it's main focus is making people laugh but sometimes there are serious arc too and good fighting scenes.
One Piece is also very funny but unlike Gintama, One Piece have a plot (Gintama doesn't) and I like how they go on different places, meet new people, fight and go back on their journey, it's more like telling off Luffy and his crew's journey towards their dream.

Full Metal Alchemist, it's also a shounen anime but more serious and have a better plot and good character development. It's actually the best anime for me lol.

Nunnally03 Feb 17, 2017 2:50 AM
Oh I know that. Which of the guys do you like? I sometimes get annoyed with Narumi(?) for always trying to push the female lead hehe. But he's changing and maturing now... I think.

Horimiya got an anime adaptation right? Did you watch it?
For some reason I like the manga better.

Yes I watched all of the funny scenes of Gintama and One Piece then watched FMA lol.

Nunnally03 Feb 14, 2017 4:28 AM
Haha that's nice at least it will flatter your heart... maybe I should do the same haha
What manga are you planning to read btw?
It's okay for me, just a normal day lol. I'll probably just watch some funny anime scenes.
How about yours?

Nunnally03 Feb 2, 2017 3:28 AM
Yeah. I like the Taiwanese version too...Actually most manga adaptation were done better by non-Japanese.
Those Taiwanese actors looked really handsome and good actors haha.

I think in Japanese, men are still seen as superior than women...their ideal beauty is a Yamato Nadeshiko after all. But maybe it's changing a bit now, there are manga/anime where the girls beat the men and men doesn't want to fight back because it's not manly to do so.
I do not like Hapi Mari btw. It started interesting and I like how strong the female lead is but later on she started to become weak and insecure.

Yes me too. I wish they will scan it soon, it's always nice to see everyone's opinion in each other - I just wish there will be more posters... the old posters that I knew were no longer as active >_<

Yes, I watched the Japanese, Taiwanese and Korean version. - I like the Taiwanese version the most. What's interesting tho is that, the actor and actress who portrayed them in the Japanese version..became real lovers and is now engaged.
Lol haha that's why I asked you about it because I was shocked about those scenes as well.

I made a mistake with Chihayafuru..it's not 5-6 months but 3 months.
The newest chapter was just out...although not scanlated yet.