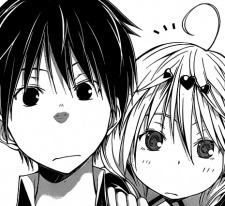 Playcool Feb 24, 2016 7:21 PM
Lol, sorry it took this lot to reply.
I enjoyed it alot, and I m hoping they animate Aliciazation pretty soon.

LilyVermiculo Jun 24, 2014 3:44 AM
xD I was going to change it along with my anime list...but then I lost my motivation halfway lol...I'll probably put it back now

sorry about not replying by the way!! >_< I use the phone app to update my list so sometimes I dont notice my profile.

hmm well, when I first watched it, it gave me a headache xD because it kept switching perspectives and that black screen red screen thing, but then I got used to it and really liked it. that scene where suruga(?) tossed him around the room o-o freaked me out till I even dreamt about it ahaha.

sooo are you looking forward to hanamonogatari/kizumonogatari?

p.s. watching nisemonogatari on tv, with other people around @_@ was sooo awkward...especially when he brushed her teeth

Into the Labyrinth? Yeah, it's quite good. I like the Durarara one you have too. It's making me that much more excited for season 2.

LilyVermiculo Apr 1, 2014 4:59 AM
ヽ(#`Д´)ﾉ arrrghhhh I need to punch something (ノಠ益ಠ) true the ending was creepy, but I like creepy stuff haha, which is why I started watching this. but jeez...no character has ever filled me with such rage..IM IN FURY RIGHT NOW @_@ that scumbag...

Which I guess was what they were trying to make people feel when they watched this so, my hats off to them.

*procedes to stalk your history page*

So how are you handling the 'man-service' in Nourin? xD
hmm you're watching mahou sensou...<_< heard it was pretty bad though so I skipped it, but you've watched 12 episodes woah O.o

Yeap, made it myself, but I don't have those photo editing software thingies so I just used an online thing ;D
I did it when I was supposed to be studying ... ahaha I get an unusual amount of motivation to do nonsense stuff when I actually need to study.

Playcool Feb 1, 2014 7:00 AM
I really liked both movies, some scenes may not have as much impact as before, because I already fully experienced them on the 27 episodes (for the first time 2 weeks ago)... BUT I recommend anyone that loved the show to see the movies, dont expect new story or plot development, both movies are a sumary of what happens in the 27 episodes, but much faster (being episodes like 6 being substitued by the "best off" flashbacks off those episodes, I talk about episode 6, cuz that was a really funny one, sad that they fully skipped it). Overall the best scenes, and most important scenes of the anime are included in the movies, and some new ones were added (like a new "final epic battle" to the end of movie 1, and, my favorite the end battle of movie 2, lots of parts of it are totally new and epic, which was AWESOME!!), so despite having half the time of screen to developt the story, they done a pretty good job at it, and despite I have seen most of the stuff less that 2 weeks previously, it still gave me those same emotions (sadness, grief, happiness, believe in yourself stuff) and "OH SHIT, THIS IS EPIC" moments brilliantly fused with awesome OST of the anime. A must watch for fans of the orignal, though I reccomend to those who just finished the 27 episode anime to give it a rest, watch it later, when your memories of "why the anime is soo damm good" are fainter. At that point, oh boy, what a trip it will be to experience this marvelous animation journey again!! I myself will go back to this series, years to come.
;)

Playcool Aug 5, 2013 1:14 PM
Going great, got some good anime to watch, it is summer so there is beach to and plus Monogatari second season is kickass!! Just want to see how Koyomi got Shinobu sword...

When you do gifs, the pictures will lose quality, that is what happened, my gif of kissshot VS koyomi on kizumonogatari had much better quality and it was like 1280x720 !! But neither the site I upload to, neither this one could handle it, so I had to downscale...

Playcool Aug 1, 2013 1:03 PM
Sure, help yourself. As for Shino/Sinnon I play to do maybe picture with all of her pictures (to not be occupying so much space). I was inspired to do the Yuuki one, I had something I wanted to say, a tribute for the character. I liked Sinnon, but I dont have any ideas of text to put. So I wont put any of it. But if you have, Photoscape is what I use, I have done all the gifs and some edits of the photos on it, it is pretty complete for a free program. I recommend it.
All Comments