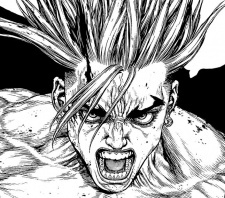 icantfeelmyarms Feb 20, 2014 3:42 AM
Shit son, read the first chapter of Wallman. Shit's fuckin TIGHT man. Unfortunately, it's almost 4 AM and I have to get up for class in four fucking hours. I'd hella read every available chapter right fucking now if I could, but >tfw class in four hours

icantfeelmyarms Feb 20, 2014 2:42 AM
Lel ye man. Ken-Rock is so dope. Wish it'd never end... :c
I just looked up Wallman. Seems kinda like a modern day Shingeki no Kyojin... is it actually good? From what I've read from Boichi, SKR is his best work yet. Probably can say it's his masterpiece of his career. I'll read a bit of Wallman though. I'd prefer if it had more chapters because I hate reading comics in their early stages... I'll get too into it and only have 10 chapters to read...

Koe no Katachi has some heeeellllllaaaaa feels. I love it so much... Haven't heard of Nozokoi Ana, but if it's that good, I'll look it up ;^P

I'm finally getting around to GTO. I have so many comics I'm already caught up on; all the ones I read weekly/biweekly/monthly.

You read the Breaker? That shit's helllllla dope man. New Waves, its sequel, finally started getting good around summer. It has this problem where it'll be great, then get dull, then great, then dull... But right now it's finally, FINALLY looking up and keeping me interested. But fuck dude, the first series was sooooo fucking sick. If you haven't, definitely check out the Breaker. Hell, you could probably even skip New Waves completely unless you're really interested, but at least read the original lel.

IDK what Wallman is. I'll look it up.

I've just been reading all these feels mangos lately. Koe no Katachi is my shit nigga.

SKR's monthly right? I hate waiting for the next goddamn chapter ;_; I wish it would come out faster, and never end ;_;

S-Lumiere Feb 8, 2014 10:50 AM
Oh, thank you for the reply to my comment on School Days. Sorry it's taken me so much time to read it. :) Well, I'm sorry I created a wrong impression, but I don't hate School Days in the least. It's nothing special, but I don't hate it. :) The topic for the the thread was 'Why do people hate it?', and I simply suggested a possible answer. I didn't intend to hurt anyone.
As for my points, they're my points, so they don't need commenting. :) Anyway, thank you. :)
All Comments