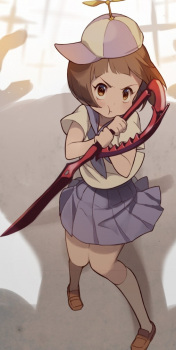 -Koku 4 hours ago
hi nice to meet u to

BadHabbits- 4 hours ago
Thank You ❤

CrimsonCW 4 hours ago
Don't fret it. You still found out. :P

Thanks! That's a nice pic :D

Avil31 5 hours ago
You must have some crazy willpower to limit yourself to only one episode per day because I was so interested that I finished it in like 2 days lol. When Satoru found the candies I was like it has to be him but then when he helped out kayo and Satoru thought of him as a father figure I was like maybe not (hopefully).
But I kinda didn't get the ending like why didn't he kill Satoru when he obviously had so many opportunities to do it. 😅

higurashi is one of the few i really like so far

how are you liking solo leveling so far

Bl4nks Yesterday, 11:59 PM
Check yourself up now. If you won't, I will have to find a doctor myself.

Third one is the guy the Magma Admiral. People hate him for killing ace, but he had his own ideals and he follows it to the end. I can respect that.

I never really noticed. They have quite contrasting personalities.

Yeah sure, she was a kid. I am not like saying it is necessarily her fault. It is just that if she never existed, Punpun would have had a harder time. If you are a lifeguard and the kid is pulling you down while you try to take them out of the water, you kick them. Sure, help other. But not to the point where you are going down with them.
I think the author tried to show that she was like I am going to fuck you, and he was just like fiiiiiine I guess. Plus he was a fucking virgin and an incell too. He probably didn't mind it that much. Just doing one thing doesn't make you that bad of a person I guess. Everything depends on context.
There are many things which are not jokes, such as murder. But every FPS game has it. At the end of the day it is fiction. Fiction should always be separated from reality. Otherwise Deathnote is sickening too. It would be unfair to put one crime of same degree above another. Letting fiction have a bad affect on a person really seemed weird to me. It is like a kid going to sleep because of Boogeyman. It just saddens me at times that there must be one person in the world who suicided because of reading some fiction. Getting negatively affected from fiction just seems stupid to me.

Exactly. Your description was really wonderful.
Lmao, I didn't get Kung Fu Panda, but I had to add "anime" to "Dragon Quest" because all the images I got were shots from the game.
These mascots look kinda funny actually.

Ahh, right, I heard people complaining about pacing in HxH. Especially on the Chimera arc that it is too long.
Well, okay, I read these 2 chapters and basically I was expecting something different from it. I'm not quite sure what but not that xD. I know that these are only two chapters but I was not very interested in it. And when I found out how many chapters it already has my urge to read it back then decreased even more. I guess I'll leave it for another day.

Odd Taxi is good, indeed. At first it seemed fine to me. Fine and nothing else, but later it gets better. Bit still, it's a bit overrated in my opinion.
Yeah, I remember that scene. I didn't expect it to be so intense when I watched it, but well, still liked it :x.
And this ending is by far the best of all!
I personally like first opening very much.

I have no idea if Sotsu will be the final season, but it's good so far. However, I have to say that the first two seasons were much better imo. There is no such creepy climate here as it was there. Plus half of Gou is just a remake of the first season.
It's not that I don't like summer, I like when it's warm (actually I'm a person who's often cold too) but some time ago it was WAY too hot. If I had to choose my favorite weather I would choose winter. Not because of the cold, but just because of Christmas mood :p.
Yeah, that's what I mean. But yes, as long as these banners are watermarked, anyone probably won't want them anymore, and that makes me happy.

K_Sans09 Yesterday, 10:05 AM
omg what is this cursed thing that you have sent me 😂
But it was hilarious!!

Hmm tbh its okay, I fell its a bit overhyped but that fine
The art is really good but Im not into power fantasies type plots

iiinumakiii Yesterday, 5:48 AM
hello, nice to meet you too! :DD

hope you are having a great day today!

HolyJolyne Jul 23, 8:01 PM
Yeah!! Alluka is really cute!! And killua is the best big brother! Ging's an ass even further in the manga 😂 Solo Leveling is very good btw!! I have read it twice :)
All Comments