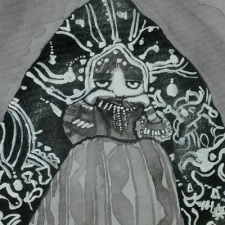 aksumka May 3, 11:27 AM
Haha, I made it years ago. Tried to make it as nasty as possible, didn't think anyone would actually like it!

Ezekiel_01 Apr 22, 6:01 PM
I'll see it with my sources if. Though I am not too confident translating it on my own. I have totally zero experience with subbing, to be honest. But that will be fun. Yeah, you're right just need the Tagalog copy even with low quality to make the job easier for me when translating.

Ezekiel_01 Apr 22, 6:40 AM
If you ever find a complete subversion of Kanipan both Original and Sequel. Inform me. I wanted to make a review about that anime and promote it to my friends, who love old school anime.

Ezekiel_01 Apr 21, 4:59 PM
Nice. I'll ask you again if there is any completed fansub. I wanted to watch complete and might as well make a review to promote it to other people interested because I kinda miss this type of anime.

I recommend watching Kanipan thought its actually really popular in my home country in the early 2000s. I watched it, Tagalog Dub, my countries native language but the entire episode where retired a few times and follow-up with reruns every year around between 2000-2005. It's a good show about a boy genius that events a lot of amazing things using his robots. It has a good blend of comedy and action, art style similar to Doraemon and the story is more like Astro Boy. About man vs robot. The first series introduces our characters.


Eventually, the series became serious on the sequel Chou Hatsumei Boy Kanipan where both the tone and atmosphere and art style become a little more mature and it took me by surprise as a kid. Its story is still the same but the escalation of conflict increase and it has a wonderful Chobits like ending. Some plot twists with the sequel. We get more complex and develop characters. I kinda miss the anime.


The first season is complete but it's on raw but thats not the issue the problem is the sequel it's really to hard to find it.

lanblade Mar 26, 4:18 PM
That is amazing.
Also omg, she's one of those crazy people who thinks their AIBO and the like have a soul. Some ppl legit have a funeral for them with the robot dies, with like a priest and everything.

lanblade Mar 25, 1:03 PM
When you get an ep count and make a discussion thread on Reddit. Shoot me a PM so I can comment there. I have discussion threads filtered out so I'll never see it otherwise.

lanblade Mar 21, 10:59 AM
It does not qualify b/c Dahee Jeong was in France when she made it for a French production company.
https://sacrebleuprod.com/en/short-films/catalogue/225/man-on-the-chair?c=73
So the piece technically isn't "Professionally produced, animated works created: in Korea for the Korean market;" to then get in under the doujinshi clause of winning an award. Similarly how if Frozen 2 won the Mainichi Film Award, it wouldn't be an anime b/c it was made in America for the American market.
The awarding bodies also must be in the big 3 countries. Awards in other countries don't matter in the same way how a season airing in another country doesn't matter. Hence the DB guidelines giving three examples, all of which are big name Japanese awards.

lanblade Mar 7, 10:31 AM
A lot of genres on IMDB are flowly so someone might have assumed that puppetry would fit under animation (like how art-house fits under Dementia for MAL or how minna anime fit under Kids) but IMDB explicitly states that puppetry shouldn't be housed under animation. Usually IMDB accepts whatever the original submitter inputs since the mods don't have time to watch every film that gets submitted.
All Comments