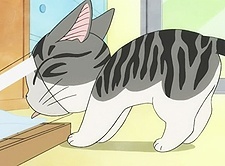 kirarakim Dec 29, 2011 4:42 PM
I was afraid what you would give Penguindrum because I knew after it relied more on symbolism/metaphors and got darker you wouldn't like it much so I am pleasantly surprised you gave it a 7.

Of course I enjoyed it more but I know it's not a series that is going to appeal to everyone.

kirarakim Oct 25, 2011 9:44 AM
I realized I have a picture of my cat that looks almost exactly like the one of Chi in your profile pic :)

kirarakim Mar 13, 2011 8:01 PM
It's really good and only 12 episodes so not much of commitment. I thought about waiting till the end but I was worried about being spoiled. Hoping for a good end. I will let you know. :)

Milkymagic Aug 2, 2010 8:50 PM
Memories has always been a favorite of mine, I actually forgot to update it onto the MAL database, and believe me, Magnetic Rose was definitely my favorite segment too. Satoshi Kon's Screenplay was very good, and Koji Morimoto's direction was solid. Like you said, I'd love to see some more space horror sometime in the future. ;)

The other two segments were the darkly humorous Stink Bomb which involved a man who drinks a chemical that makes his body sweat a stinky gas that kills anyone nearby, yet it also fertilizes the soil near him too. The military tries to save him when they notice the big gas clouds thinking he's a survivor with plenty of them falling to their death, and with the ones behind them noticing and running away was something I couldn't help but be amused with. It's almost like a parody of what happened at the end of Akira.

Cannon Fodder was the last segment, involving a society that lives entirely in war, and make a celebratory event out of attacking "the enemy city" even though it is never made visible who the enemy is. I liked this story too because it showed me what would happen if there was nothing left for us to do but fight. Good stuff.

Milkymagic Jul 20, 2010 9:58 PM
Looks like I spoke too soon, Omori's already geared up for work on Kuragehime from what I read on his page. XD

I really like guys like him, a true workaholic who's dedicated to his job, and his projects always have a strong effort put forth in them to prove it.

Milkymagic Jul 20, 2010 9:09 PM
Indeed, it seems like a lot of anime Omori happens to helm is right up my alley, his directing style, and the screenplays he gets to work with are a great combination. Safe to say I'm game for anything else he gets to be a part of, and I feel he's been on something of a streak these past seven years (from Koi Kaze all the way to Durarara!).

I hope you enjoy Hyper Police if you ever get to see it though, it starts to get really interesting after the first few episodes, so it's a matter of sticking with it (I believe episode five is when things really start getting interesting). Another early-period Omori work I liked was Fancy Lala for the record, it was a fun series with just the right mix of hijinks and worthwhile subject matter thereof.

Milkymagic Jul 20, 2010 10:42 AM
Well, I've managed to watch Durarara! in its entirety, and personally, I feel it's very enjoyable. In fact, I liked it a bit more than Natsume Yuujinchou if that's any indicator how well this series did with me.

I do agree that the whole focus on the teens did damper some of the events going on with other characters, but the events with the teens at least surprised me enough to get me thinking "Really!?" It has the same flow and cadence of Baccano! thanks to the reteaming of certain key players from that said production, which probably explained why I was able to follow this series very intensely for the most part, with lots of interesting detours and character intrigue like before. I think the only differences in that department would have to be the lack of different time periods and a different location than Baccano!

I do support the opinion that it is not better than Baccano!, especially since that series didn't leave me hanging around, while Durarara! had me interested from the third episode onward (with some slowdown near the end of course).

There's a lot of fun messages in Durarara! that are worth noting, including the ideas behind growing up and where it fits in inner-city life, along with the details that go behind being a social outcast: something that director Takahiro Omori has made a staple thanks to such productions as Hyper Police or Gakuen Alice even.

I should probably slap down a blog instead, but I figure a few tidbits would be interesting if anything! :D

Milkymagic Jul 14, 2010 12:10 AM
I have submitted my review to Mugs as we speak, if you want to see what the review looked like let me know.

The anime in question was Metal Skin Panic Madox-01 in case you were curious. ^_-

Milkymagic Jul 12, 2010 2:07 PM
I appreciate the sentiment there, that's the sort of feeling I had. I debated seeing if I could smash my Anime Academy forum pic into my profile here, but the Noriko pic I currently have on MAL is pretty interpersonal and pleasant to look at now that I think about it.

It almost looks like she's trying to say hello from a distance too.

Milkymagic Jul 11, 2010 7:32 PM
Guess that High School Of The Liviing Dead likes to play the "Fanservice Card" a lot more than I expected. I would likely find such a behavior hilarious and fitting in a B-Movie kind of way. :D (I've seen plenty of B-Movie Horror titles with hot babes in them after all)

I played through Bayonetta on my 360 and loved it, so MadWorld would be a no-brainer. Not sure why I forgot that one. :D

Also, I have Odin Sphere on PS2, but I actually haven't played it yet. Jetfire has told me how hard that game was, and I thought it looked cool. I would definitely consider your Wii recommendation for them too. I would like to get the Nights sequel as well on another note.

Milkymagic Jul 11, 2010 7:16 PM
I seriously need to get a Wii man, that Sin and Punishment game is eating at me. I loved the original so much that it was a mind-blowing announcment when I discovered a sequel was going to be made. I'll likely need to get the funds together for a Wii in the future and give that game a shot, along with the Trauma Center titles and the Oneechanbara title respecively (I loved the Simple 2000 games for PS2).

High School Of The Living Dead seemed like something the Anime/Manga medium needed, I loved the George Romero films from back then, and it's nice to see anime-style characters run from zombies in the same vein. :D

Milkymagic Jul 11, 2010 6:22 PM
Thanks for the confidence booster man, I think I'll look up an anime I'm familiar with on the MAL Database and give it another whirl with a review in place for it.

I'm hoping to get my entry in by the end of this week at the very worst, but I will likely have something in a few days I would imagine.

Also, I thought High School of the Living Dead looked cool for a newer series, but of course, this has a lot to do with me loving zombie flicks. :D

Milkymagic Jul 10, 2010 7:39 PM
I appreciate your bid for me to come into the ring and contend for a professor spot, it meant a lot man.

Right now though, I'm not sure what to review. On one end, I feel like I would earn more attention for something that's more recent as far as picking an anime goes, but even I'm not sure what to review now that Durarara has been licensed. I could pick a "classic :P" that I know to be middle of the road, but I'm not sure how that would roll with the people who will do the judging if they're hoping to see a more progressive professor on board.

I guess I'm a little confused right now and I was curious what you would recommend. No pressure though, as I'm certainly working on what to do myself. ^_-
All Comments