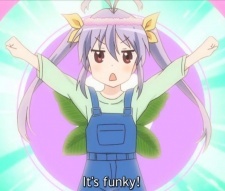 Yep. Between and 'other things' I've been having trouble finding time to sit and watch new stuff lately. Hopefully this fall things will ease up for :)

I recently finished "Asagao to Kase-san.", but I'm having trouble deciding on an 'unbiased' rating. It's based on the manga Kase-san Series. I really like the manga. But "Asagao to Kase-san." was just an hour long, with a 6 minute 'prequel', that between them tried to cover the first 4 volumes of the manga. I guess I'm spoiled by adaptations that cover the same ground in the course of 12 episodes...

I also recently finished "Cardcaptor Sakura: Clear Card-hen", which is the 4th installment in the story, and also enjoyed that.

I kind of like Uma Musume: Pretty Derby (TV), but I'm having trouble mustering up the motivation to watch the last 3 episodes.

I'm planning to pick up Yama no Susume: Third Season, which is just now airing, but for some reason haven't started it yet.

All in all, the Spring season produce very many things I was interested in.

Cratex Mar 24, 2018 8:28 PM
LOL. Though, I'm not particularly impressed by the face he often assumes when he does put on a human face. But, whatever makes Chise happy is what counts! :)

I highly recommend the manga.

Cratex Mar 24, 2018 2:57 PM
I honestly didn't expect that would be how Chise would handle Joseph. But, then, I realized it was exactly Chise.

Cratex Mar 11, 2018 2:55 PM
I'm not sure if feelings is the right word since he seems more reactionary than truly emotional.
I've been thinking that there are some aspects of Mahoutsukai no Yome that remind me of Beauty and the Beast.


Do you think one of them is "Joseph" or is he something else entirely?
That's an interesting idea. I don't think her brother is "Joseph", as Joseph is an ancient figure with considerable backstory. But the thought in my head is that Joseph may have been possesed by some evil entity in the past, many centeries ago. And it is this entity, or Joseph's reaction to it, that drives his behaovir. It's possible that Joseph did influence Chise's father and then later absorbed part of him, much like he's trying to do with Chise right now. So I do see that there is the possibility of a connection.


I love how much Chise has grown throughout the series.
Agreed. It's one of the reasons I've liked the manga so much, and had such high hopes for the anime adaptation. I've been blown away by how good the adaptation has been.

Cratex Mar 5, 2018 5:03 PM
I just today in the mail received volume 8. I scanned it real quick, since I was curious also, and it ends exactly in the same place as episode 21 did. The anime is continuing to following the manga very closely. There is more detail in the manga, but so far as I've noticed it hasn't been anything significantly different. Except maybe they could have shown more of what Ariel said to Elias when she kept him from immediately running after Chise.

Actually, in some ways, I'm surprised Elias lasted this long. He's not human, probably not even an animal, but even the "others" wont accept him. He's isolated from everything - even his relationship with Lindel was always strained. He thinks differently from everybody else - I doubt he thinks in terms of "right and wrong" like humans do -- and he has had no attachments to anybody or anything...until Chise. After centuries, the one thing he found he wanted is suddenly becoming the one thing he can't keep.

It would be nice if we lived in a world where women could solo camp and be safe, but I'll pretend it's sort of like a story with magic - I'll just accept it and not think about it to hard :)

Must be going to cover the trip to Okinawa.

It is following the manga very closely. I think the order of a few events has been altered, and a little more content has been added (in a good way, I think), but nothing important has changed. The 3 ep OVA that aired this last year was, obviously, original, but very close in tone and theme.

Since it is planned for 24 episodes they should
be able to cover the part from the manga where it provides a little bit of Elias's background. There is also a small bit of background for Silver (which should go a long way to explain why she wasn't able to take the basket to Chise).