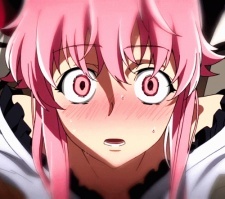 xoxoxoxoxoxoxoxo Apr 11, 2015 5:02 PM
Seraph is probably my favorite of the season, but if you like crying you should give Plastic Memories a try, and maybe Ore Monogatari if you're interested in romantic comedies. Kekkai Sensen's not bad either if that's your thing, but I wouldn't heavily recommend any others this season. I like to watch the first episode of everything airing and see if it's something I'll like, no matter how it looks.

xoxoxoxoxoxoxoxo Apr 9, 2015 2:57 PM
It was SO much fun to watch! I love all the characters and I thought the card game aspect was really enjoyable too. I think it's extremely underrated since I feel like that show did so many things uniquely and correctly.The ending felt satisfying too.

How are you enjoying the new anime this season?

xoxoxoxoxoxoxoxo Mar 30, 2015 4:52 AM
I agree with you about the Selector series! It's one of my favorites for sure.

dave Oct 23, 2014 11:47 PM
Thank you! Actually it turns out a few people on here have said they like how I think. Which is somewhat of a surprise for me. I never thought that I was too intellectual or things of that sort. Maybe I'm just too modest.

Well it's not that girls don't go out of their way to talk to me. They have. It's just, no girl has ever approached me and made the attempt to flourish something other then typical small talk. I'm kinda good at reading how people think. And you know when a person is showing a lot of interest in you.

I approached women like another person. Treated them the same as anyone. I don't discriminate between genders. I treat both men and women with respect. But you know how guys say that and treat women and men the same, but it's clearly obvious as soon as an attractive female steps into the picture they change dramatically? Yeah I tend not to do that.

I was a nursing major. I went to community college for a year, then switched to a nursing program at a more pristine college my second year. But because of frustrations about the college system teachings and other factors going on in my life around that time, I dropped it and started searching for a job.

What don't you particularly like about school? For me personally it was how everything I learned tended to not matter at all. That out of the 5 classes I was taking in a semester, only one would be useful for my career choice. I hated that. I hated how the system tries to make everyone a jack of all trades, which restricts being truly amazing at one thing. Plus I believe that a piece of paper doesn't make you any intellectually superior to another, because learning from books is not the same as learning from experience. You're in college now right? What's your major?

I don't think anyone is invisible. Everyone has someone that has watched them in some way before. Not creepily of course, just a human to human interest. Whatever that interest is, really depends. Putting yourself out there to a point is good. It makes it to you show others interest. I think the main reason why people hold back is they're worried the other shows no interest. But if we let our interests show a bit, it may encourage or reveal an interest the other person had. After all, you never know unless you try.

But that could be the guys were just more outgoing and approached said women more often. It's been known that women tend to value more outgoing personalities then looks, unlike men who place a lot of value on looks. I do agree a lot of other factors are at play though. It's not all black and white.

I catch your drift.

I work at a grocery chain warehouse. It's a manual labor job, but it's not as bad as people think. I make a decent wage and am doing well. I may end up taking some college classes to finish up a degree at a later date, but for now my needs and beyond are met.

dave Oct 23, 2014 9:43 PM
I like doubting assumptions as well, but only so much. I try to balance between being optimistic about others, and being cynical about others. I've met people whom don't meet the stereotype as well, just still I don't like taking a few people and applying it to the whole.

I'm sure you're not awkward. But think about it this way. If you were very shy or awkward to a point where you didn't go out of your way to approach others, do you think a male would still approach you? That was pretty much my main point. A shy or timid woman can still be pretty apparent in relationships, and just plainly meeting people of the opposite sex, whereas a guy with those exact same features would have far less results.

dave Oct 23, 2014 9:06 PM
Aha. That's a relief. I hate when I say something, and someone finds offense to it when I didn't intend it. I immediately apologize to try and diffuse the situation before it becomes a problem. I don't like fighting people. It's not fun.

I do agree that there are a lot of assumptions. But not all assumptions are untrue. Assumptions and stereotypes tend to have some truth to them, just sometimes are based loosely on truths. It just seems more so that the Casual Discussion side of MAL tends to be more socially awkward from what I see on a usual basis. Which is in of itself normal. Not everyone can be charismatic butterflies in the world. I myself can say I have some awkward tendencies as well. It just comes with the fact we choose to spend time talking to people online more then reality sometimes.

Ugh, my new avatar keeps reminding me of hardships Itachi had to endure. OHHHH, ITACHI T^T :<

Shole Feb 19, 2014 1:29 PM
Would you say Kyoukai is worth watching ? I read your review but I am still not sure if I should try it now or put it aside for the time being.

would you like to join us ?
http://myanimelist.net/clubs.php?cid=21716
All Comments