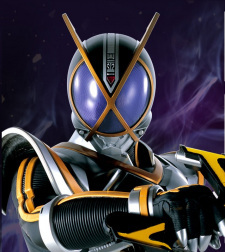 Keep in mind; that is coming from someone that has barely has watched any Mecha anime or at least I'm trying to give Mecha a chance every now and then. Heck, I even gave Dual! Parallel Lun-Lun Monogatari and iDOLM@STER Xenoglossia a higher score compaired with Neon Genesis Evangelion and Tengen Toppa Gurren Lagann. I'm gonna be honest: I probably would have disliked iDolM@ster Xenoglossia a bit more if I watched The iDOLM@STER first, but the idea of anime girls piloting robots to punch moon debris was a silly but kinda entertaining idea and Dual! Parallel Lun-Lun Monogatari is just charathers based from Tenchi Muyou! Ryououki with a Evangelion vibe overthrown but less bullshit thrown at your screen. I still can say something positieve about Evangelion but in the end it's just perhaps not for me. I guess the kind of people that praise Evangelion as top-solid peak anime to the moon are the ones that haven't explored the genre even less then I do. About Tengen Toppa Gurren Lagann: I gotta admit I originally was enjoying it, but it started to become very clear later on that episode 8 was pretty much the peak of the series and it just started to fall apart later on which a bit of a shame.


Sure, I'm honesty leaning forward into looking a bit further into Mecha. I already have Kidou Keisatsu Patlabor downloaded and not sure what else to try out somewhere in the future. I know the existence of Mobile Suit Gundam, but that feels a bit intimidating with all those spin-offs and what not.

IamZodd Jan 14, 2019 7:03 PM
Probably not, but I came across your profile and thought it looked dope along with your favorites list. Also just trying to connect with other anime fans.

Kellhus Dec 22, 2018 12:05 PM
No I haven't played Xenosaga. It looks pretty /a/ as well though. I did play the first Xenoblade game. It was okay, but I didn't like the MMO gameplay and the story/characters didn't do much for me. Certainly nothing compared to Xenogears, but it's still probably one of the better JRPGs of that generation.

Haven't heard of Daemon X Machina, but it sounds intriguing.

I saw about SRW T. The series list is godly. They really need to update the visuals and gameplay though, they've been using the same assets since Z2 (with more polish and new sprites on the way obviously) and haven't had new gameplay mechanics since Z1. So the series really hasn't grown in 10 years and has basically been the same games now across 3 console generations. So I've lost a bit of enthusiasm about SRW, although the new Masoukishin games were a pleasant surprise and were really good. I do need to play Dark Prison and Moon Dwellers as well.
https://www.youtube.com/watch?v=L7VBNu0btQc

Kellhus Dec 21, 2018 8:05 PM
The second half of Xenogears was supposed to have the same content as the first half. As in each segment was supposed to have a town, dungeon, story progression, etc, but it's literally cutscenes interspersed boss fights then the final dungeon. I don't think it ruins the game, but it's hard not to long for what could have been. There is some website out there that details everything that was cut, I don't remember what it is but I know Xeogred will have it.

I think Silent Line is the best of the 3 series. Nine Breaker is weird, I like it, but as you probably already know it's only arena missions. Can't go wrong with any of the AC games in my opinion though. Except for the PSP ports... I just couldn't cope with the controls. I like Last Raven a lot too though, the plot is great and it probably has the most challenge of the entire series, although if you're playing them all in succession you will probably walk in on auto-pilot and not have much of an issue.

The 4 series seems to be divisive. I absolutely love it though. The faster gameplay gives you options for completely new builds and makes the game feel new again. Then 4 Answer ramps the speed up even more with ridiculous giant mega boosters and a new weapon class that is basically Ideon Gun blasts. It's probably my personal favorite overall, but I can see why people prefer the more grounded aspects of the earlier games. But to that I say, there is still tons of customization options and if you want the tanky builds, just make them. But don't go online with them lol.

5 was good, but the amount of content was pretty much unforgivably lacking. There's like... 10 levels or something, maybe even less. The levels are all very high quality with no filler, but still, it's hard to overlook. As you probably know, the game was mostly online/clan based, an odd decision. But the gameplay was good, and the HUD design was really cool and gave it more of a legitimate sim feel. I never did play 5 Verdict Day so I don't have anything to say on that one. My hope would be it has more offline content though.

wgbho23 May 15, 2018 4:06 PM
Im unsure whether I would prefer Layzner or Votoms and that has me hesitant to start either.

Anyways, I should have broadened my question as I am really interested in s.CRY.ed, and I see you have the MC in your favorite characters, what do you think of the series? I hear the dub is amazing and plan to watch it soon. Watching Martian Successor Nadesico rn

Also, reading your tags rn has me excited, 2 of the other shows I am heavily interested in, Dunbine and Change!! Getter Robo you consider the best of their genres. With Dunbine I was specifically looking for a Fantasy Mecha show too.

On a side note, Im also looking for really good anime movies as I want one on my favorites but I haven't seen any that are good enough. Im hoping I love Ideon and maybe can put its movie on my favorites.

You've basically seen every mecha show I want to see (trying to get even more into mecha anime even though I already consider myself a fan). Just to name a few more that I haven't already mentioned, Brigadoon, Macross, Zegapain, GaoGaiGar, RahXephon and Im sure many others.

Unfortunately we have pretty different tastes in anime as you don't like Evangelion that much especially the final 7 eps and I consider those eps to be what made it a masterpiece, regardless I'd like to hear your thoughts.

On a final note, do you plan on checking out Darling in the Franxx? And I have one recommendation for you and that is "Mighty Orbots", check it out, you may have to buy it though.

wgbho23 May 7, 2018 9:38 AM
Im looking for some good 80s anime, do you have any recs? I see a bunch on your favorites, are those series standalone or are there sequels, etc? Thanks in advance

Barzam Apr 6, 2018 9:55 PM
Everytime I see her, my blood boils uncontrollably
All Comments