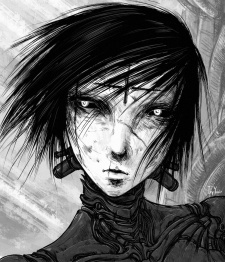 Tobleh Nov 12, 2015 4:53 AM
he is way better then every other character. he makes kurumi seem like crap and don't even get me started on that face ahhh his just to good

Tobleh Nov 12, 2015 12:54 AM
Foxy is a stout man with skinny arms and legs. He has almost a cleft lip-like mouth and an unique hairstyle. His nose is also colored red, it is long just like the nose of Kaku and Usopp. With these characteristics, they make him look like a fox. Foxy typically wears yellow orange suspenders and a coat. His coat is colored purple in the anime, while it is colored silver in the manga and other manga related media.
Personality
Foxy is a cheater and trickster, who participates in the Davy Back Fight, a contest between pirate crews where the winning team can steal crew members from the losing team. Most members of Foxy's crew joined him because he won them in this contest. However, they seem to be genuinely enthusiastic about being in the Foxy pirates, and wholeheartedly cheer on their crewmates and captain in the Davy Back Fight.
Though he acts supremely confident most of the time and seems quite fond of himself, Foxy is extremely sensitive to insults or criticism. Any offensive words from others cause him to instantly become depressed, and he usually ends up losing his footing and falling to the ground, barely supporting himself with his arms, while a black cloud suddenly appears over his head. Luckily for Foxy, all it takes is a few kind words from anybody to perk him up again. In the anime, Nami and Usopp used this weakness to their advantage by alternately hurling insults and compliments at Foxy non-stop, leaving him emotionally (as well as physically) paralyzed and unable to help his team during the roller race.
Abilities and Powers
Foxy is a cunning character who uses his Devil Fruit powers as well as various other tricks to aid in him cheating. He also seems to have an extraordinary sense of time, even when he had slowed down multiple cannonballs he still knew exactly when each and everyone of them was going to regain fullspeed.