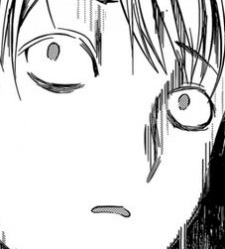 Ah, it's a lot I know, lol.. but I do plan to watch them.
It's just that one day I went to the 'seasonal anime' page and added a bunch of anime to PTW from 2016 summer - about 2000. I added the ones which looked interesting, honestly, just so I don't have to go back in time and add those anime later to my list. It's a lot easier to just pick one if I have all of them in one place. That's why it's such a big PTW list lol ^^

max22187 Feb 16, 2017 3:23 AM
I was a little skeptical going into it at first too, but once I understood what the mc was trying to do, I started to enjoy the series.
I think the reason as to why they don't write that in the synopsis is because it's sort of a spoiler (but at the same time not). It's complicated, but you'll know what I mean once you watch the first 2/3 eps of the show.

max22187 Feb 15, 2017 7:18 AM
Hi,
Definitely!
The only thing that I'm having a bit of a hard time grasping is all the military term used there, but other than that, it's pretty enjoyable.
It's basically about a 10 year old badass/psychopatic (loli) girl fighting in a war with magic elements, and how she tries her hardest to get promoted to the point of being able to not fight physically in the war and live somewhere peaceful for the rest of her life.

Melody Jan 11, 2017 8:48 AM
Trigger's quirky style is something that people either like a lot or dislike. I can't tell on which side you are going to be, but so far Little Witch Academia seems quite nice. Just don't go in with too many expectations, just because of what you've heard about the studio. If you don't find its style at least a little interesting after watching the first episode, it's probably not your thing, despite the fact that it's just the first one and that it will probably get better in the next episodes.

iViRUS Jan 11, 2017 5:38 AM
I literally searched "Kimi no Na Wa watch online" and I watched it with the first link that came up. And thanks I'll check out Barakamon too :)

animangafreak_ZX Dec 27, 2016 5:19 PM
So, what are your thoughts on finishing reading Shinyaku Seisho??? Anyway, just let me know, and cool avatar.

Trollie_Hime Aug 19, 2016 6:28 AM
not really-
o v o
the flashback about wilhem and his wife is important
well the team emilia vs teamrem war need a break like ugggh so damn annoying already

Melody Aug 18, 2016 9:32 AM
It makes quite some sense that the plot progression isn't that fast in the show, since its main characteristic is that we always see Subaru returning to a certain point of time and watch some events staying the same, while others change, according to Subaru's decision. There are still 5 episodes, and I don't really think Subaru will die again in this arc. So, we will definitely see something worth in those last few episodes. It might have been quite a few episodes since we saw something as thrilling as the first two arcs (although the episodes with the Witch's Cult were pretty interesting, too) but, I believe that it was worth it because it offered Subaru so much development. I guess we'll just have to wait and see what is going to happen in the next episodes.

Melody Aug 16, 2016 8:55 AM
I've seen a few people say that they don't enjoy the last few episodes that much but, I believe that the quality of the show is still the same. The plot is progressing, so it is only natural for some things to change. The first 2 arcs were more like an introduction, as the series progresses you see more of the world of Re:Zero and new elements are showing up, for example the Whales, which have an important role in this arc and they will be the first enemy that is connected to the witch that we have seen so many people seriously fighting against. With the end of episode 20, we might not be so sure if they are actually going to make it but, I don't think Subaru can die again after all this development he received.
Maybe that's why you found those few episodes boring, because they mostly revolved around Subaru's failures and character development?
I believe that with this episode, Re:Zero completely came back to the thrilling experience of the first arcs. What is it exactly that you didn't like in the last few episodes?

Melody Aug 13, 2016 9:54 AM
That's nice to know :) Well, I enjoy drama and romance anime, too, but, as I said, only a few of them.
You're the first person from the Philippines I meet and talk with on MAL.
I've been playing osu for around two years, if I remember correctly.
I'm happy that I was helpful and I hope you will enjoy them :)

Melody Aug 13, 2016 7:31 AM
I mostly enjoy comedy anime, a few shounen with action, anime with supernatural elements and slice of life ones like Barakamon and Amaama to Inazuma. The drama/romance is just not really my thing, with a few exceptions, like Your Lie in April.
Well, yeah, I'm from Greece :P Where are you from?
Osu is the kind of game you have to play a lot to get better, how long have you been playing?

Melody Aug 13, 2016 6:06 AM
Personally, Angel Beats, AnoHana, Toradora and a couple of others I mentioned, aren't anime that I enjoyed that much, they were ok, but I believe they are worth a try, since some of the things you like are similar to them.
I'm glad I helped :)

I haven't played osu for a few months, so I am no longer as fast and good as I used to be :/
Do you play osu, too?

Melody Aug 13, 2016 5:43 AM
Hello, I'm glad that we have similar taste and, of course, I have the time to give you a few recommendations. I'm not sure if you are going to like some of them but, I will mainly recommend anime that you might like according to your scores and a few that are pretty popular and seem to be missing from your list. Here I go then:
Angel beats, Anohana, Bakuman, Code geass, Death note, Fullmetal alchemist: brotherhood, Gekkan shoujo nozaki-kun (pretty much like kono bijutsubu, romance doesn't really go anywhere but, they both are more about the comedy), Kiseijuu: sei no kakuritsu, Kiznaiver, Shiki, Steins;gate, Tengen toppa gurren lagann, Toradora, Zetsuen no tempest, Mahou shoujo madoka magica, Clannad, Death parade, Nejimaki seirei senki: tenkyou no alderamin, Bakemono no ko, Kokoro no sakebitagatterunda, Kotonoha no niwa, Ookami kodomo no ame to yuki, Summer wars, Hotarubi no mori e, Toki wo kakeru shoujo.
Also, if you liked Bakemonogatari's dialogue-based style you can keep watching it and its other seasons and you might also like Katanagatari (different story, same author). From your PTW list, I have only seen 91 Days and Shokugeki no Souma, but I think you will like those, too.
Anyway, that's it. As I said, I can't promise that you will like all of them, but I think that they are at least decent anime. Hope you will enjoy them ^^