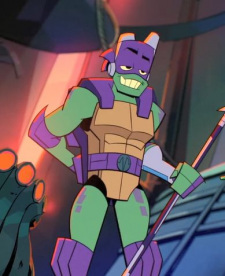 It's not unusual for second seasons to be rated higher as viewers who don't like the show won't watch further than the first season.

Taeyhung456 Jul 13, 11:41 PM
Yes um if your looking for more of grunge music you can listen to Post Malone or Sub Urban or if you into cheesy romantic stuff check out Ashe or TOMORROW X TOGETHER and if you want upbeat music listen to Ariana Grande or Wengie those are som good options

I'm sure she will love doing them all! She just finished a Blastoise sketch that was another commission from me! I got 3 sketch ones and said she could pick which characters but to do one pokemon, one digimon and a Naruto character! She should be starting your Nausicaa soon! I can't wait to see that one finished too!

You know I haven't seen Arietty yet! It's one of the two Ghibli movies I haven't seen (the other is When Marnie was there)! They're both on U.K. netflix atm tho so gonna try and watch them both soon!

JVskunkape Jul 13, 4:46 AM
That's so cool!! Thank you so much we both honestly really appreciate your support, you're so awesome!!
I've been trying my best to support the account and it looks like it's really growing which is great! :3
What other anime were you thinking? I know you both love Shaman King and I'm sure she'd love to do a Shaman King piece! I just commissioned her myself to do the Magician of Black Chaos from Yu-Gi-Oh!!

JVskunkape Jul 7, 3:20 AM
hahaha Arigato Gozaimasu my guy!! My gf told me you got another commission thank you sooo much <3 <3 <3 We are both over the moon with your support, you've been so sweet! :))

JVskunkape Jun 21, 8:08 AM
Wow Ultimo does sound like my kind of thing! I do love Stan Lee! Haha that's so funny about Luffy and Orochimaru, I always thought Orochimaru was such a cool villain though!

That's the main reason I have interest in Eyeshield 21 tbh!

I have heard of Gleipnir! The anime caught my attention! It's already out and almost finished airing I think! The other Manga you mentioned sounds cool too! Tbh Vampire Knight is defo a guilty pleasure of mine and is a romance I guess! I also tend to like Harem and ecchi anime sometimes so guess I'm not as selective with the romance stuff I enjoy!

Gintama is another one I've been meaning to get to for a while!

JVskunkape Jun 17, 6:03 PM
Nice, my gf loves Shaman King! She was also so excited for the announcement! I'd like to watch the original before the new one airs now, I feel like it could be the series' Brotherhood moment haha (like FMA). GTO I got recommended by a co worker and he really sold me on it! KHR I was recommended also by a friend years and years ago but I've really sucked at getting to it. Eyeshield 21 I mostly know as the other main work of Murata who drew the One Punch Man manga and the same writer as Dr. Stone, so defo wanted to check it out, despite also having very little interest in the actual sport or sports anime in general.

I hear what you're saying about Pokemon, defo a very laid back and innocent watch, I've recently been trying to catch up on the newer Yugioh series after rewatching what I did when I was younger.

From my list looking at what's not on yours yet, I'd definitely have to recommend my fav Air Gear, but there's a few I'd consider classics you should think about checking out such as Akira, Magi, Code Geass, Saiki Kusuo, Rurouni Kenshin and ofc Attack on Titan, Naruto/Shippuden & Dragon Ball! There are many others I'd also recommend but thought it would be easier just to mention the ones I consider classics, I'm sure you've at least heard of most of them! :))

JVskunkape Jun 17, 6:07 AM
I just realised you've got a lot of series I've really been wanting to get around to in your faves like Shaman King, GTO, Eyeshield 21 & KH Reborn! Would love to hear what you thought of them :))

JVskunkape Jan 16, 2:33 PM
Cool! I've actually played some of the Bravely games and really enjoyed what I played. Didn't they recently announce a new one for Switch?

I would recommend checking out the 3DS eshop game Attack of the Friday monsters if you haven't! Really loved that game and nice cheap title. I recently bough Pocket Card Jockey (by Gamefreak!) but haven't got around to playing it yet. Still mostly play gen 2 on the VC on my 3DS lol.

Hollweg Jul 24, 2019 11:46 PM
Nice YowaPeda review my man. The three main schools slowly became one of my favorite rivalries in sports anime and I like how you addressed the senpai-kouhai relationship in every team.
Let's hope we don't have to wait much for the next season, if it ever comes.