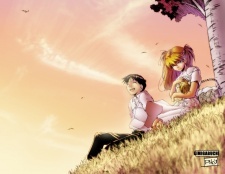 nil- Mar 31, 2014 10:26 AM
Hey! Oh, you currently go there? Yeah I'd love to have an in-person meet-up. Unfortunately grad school doesn't start until September, so I'm stuck at Berkeley and then doing an internship at New York or Chicago over the summer. If you'd be willing to wait (or remember, heh) until Fall, then for sure. You gotta let me know what campus food is good!

I've always been an apologist for the OreImo anime so I did like the OVAs, but at the same time, there were some huge problems with the series in general, and the OVAs merely accentuated that. Funnily enough, my favourite part of the OVAs was the fight between Kirino and Manami. (Was that the part you didn't like as much or the part where Kyousuke and Kirino "broke up"?)

I see OreImo as a series that succeeds exceedingly well on a micro scale. As in, the individual scenes and characters are excellent and can be read and interpreted in an enjoyable way. The problem is linking that all to a bigger picture, because the direction doesn't emphasise a particular interpretation. This is how we can have scenes where the viewers identify with characters but for the wrong reasons or how many egged on Manami in the end even though she was probably meant to be playing the devil's advocate. It's easy to watch and it's easy to judge, but coming up with a holistic interpretation that doesn't step all over one's morals or common sense? It's very difficult. As soon as we start looking for consistency and realism in the characters' behaviour, the interpretations start falling apart. It's not unlike SAO in that sense.

So I quite like your take on OreImo as a series that deliberately perverts reality with anime elements. It might not be the interpretation that the author intended (who knows what he was thinking lol) but in terms of finding an interpretation that permits maximum enjoyment? It's spot on. I'll be quite frank in admitting OreImo is one of my favourite anime series ever and it's largely because I'd been interpreting it in much the same way. As for Kirino, the hate on her was simply overblown. Kyousuke, though... wow did he turn into a faggot.

Hahaha even though I love this series so much it is way too easy to make fun of it :')

Frog-kun Aug 22, 2013 11:40 PM
Hey, I noticed you really liked the ending OVAs of OreImo. I'm eager to hear your interpretation of it and the series as a whole. I have a feeling you have some really interesting thoughts floating in your head, and I feel this need to discuss the anime with someone who doesn't think it's total crap.

Frog-kun Jul 7, 2013 7:25 AM
I actually haven't watched much of the new season yet besides, you know, the swimming anime. lol. Of course, there's the new Monogatari series, but the anime I'm really looking forward to haven't aired yet. So I don't think you've missed out on too much (yet)! Hope your schedule in Japan is not too hectic and you're settling down there all right.

Frog-kun Jun 21, 2013 7:23 PM
Added you because:
a) I like your blog, and
b) Because I was surprised to find a blogger who I have a high compatibility on MAL with. You have no idea how rare that is for me.

simplechild Jan 20, 2013 8:48 AM
I'd definitely suggest Maoyuu, Kotoura-san, and Tamako Market. Others that I'm tenative about are OreShura and Sasami-san. Things I'm just watching for shits and giggles are Vividbutts and (the Whine-Subs release for) The Unlimited.

No one is expecting greatness because lolWinteranime, but these ones aren't terrible.

Seabury Nov 18, 2012 1:34 PM
Hi, I just noticed you subscribed to my blog, and I think we should be MAL friends too! Not only do we have similar tastes (78% compatibility!), we're also both physics guys and drummers. Though admittedly I'm a bit mediocre at the latter...

midas1231 Nov 3, 2012 2:57 PM
its not getting better, it took some intresting turns, idk if i like it but im still watching it. The music and art are still great.
All Comments