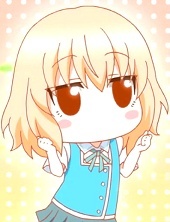 Ok then. :3 Have fun watching Strike Witches~! :3 I'm sure you'll like it, not sure why anyone would hate it.....besides the fact that there's so much nudity and fan service in it. x3

DivineTrinity Dec 5, 2014 7:11 AM
No the prequel didn't come over since it wasn't even an RPG. It was a visual novel with some dating sims mixed in and those type of games never if rarely ever leave Japan. The localization is fine its in English and the option for english subtitles and the context makes sense. I would think you may be lost in some characters goals or development. In my MAL Profile picture you should see two girls. The one with the brown hair and blue eyes you probably won't know her goals for quite a while in the PS3 game sequel since the majority of her development was covered in the prequel game.

Thanks. Part of me feels like you should just wait it out. The publisher/developer said if the PS3 game sells well they will consider bringing over the prequel game since it got a new version which doesn't require you to be "Online". The prequel game is for Vita so part of me feels it might be better to wait and see if they do bring it.

I do enjoy the PS3 version sequel (Ar nosurge) but they took out some things since we didn't get the prequel game like an optional boss (Which if beaten lets you use different costumes) they also announce a new Vita version with all the DLC for Ar nosurge so again waiting might be the better option.

Anyways......Strike Witches? Oh, yeah, that's a good one. :3
I liked it for the characters designs, and the action was alright, and the fan service was delightful. :3 I wouldn't recommend it to anyone who hates fanservice, but it's still a good anime nonetheless. I enjoyed it to the fullest, and I need to watch the movie and OVA's soon too. :D
Oh! And I heard there MIGHT be a third season.......
They said that a while ago and announced OVAs instead, but there are still rumors on a third season......
Anyways, it's a good anime overall, I'd recommend to you, UNLESS! You hate fan service. xP

WolfAnime101 Dec 1, 2014 5:42 PM
Reason why I like Honoka the most: She's an awesome leader. xD
Yeah, I suppose, or you know, since she's a girl the "mother" figure of them all. Or maybe that's like Umi? Not sure haha. :3
Yeah, that's a smart thing the creators did for Love Live. Instead of making all the girls just have cute personalities, they not only have cute personalities, but they each have an individual trait that makes each one of them awesome. x3

DivineTrinity Nov 30, 2014 9:53 AM
It came out in US/EU around September but I guess its not an extremely popular title like compare to Pokemon, GTA and Call of Duty. Well if you ever heard of Ar tonelico
Ar nosurge is a prequel to those games.

The story? Its hard to recommend it. Its a continuation of a game called Ciel nosurge for PS Vita. The game never left Japan. You may be fine since the main plot is still there its just a warning since you may be lost why is a certain acting that way when you missed out on why in the previous game. (There is a summary of the game but its kinda a long read)

Hint of romance? I say the romance-wise they are already solidified. I guess for what you saw in my sig its the story about those two and two other people. Honestly you should prepare yourself for an JRPG's that are more story/character development focused than anything else. If you can handle it then I don't think this game will disappoint.