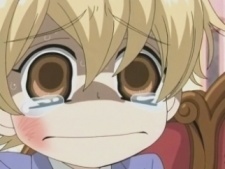 1) Very cute. I liked how the duo in the video I watched were lip-syncing as they danced. Made it far more enjoyable. Not sure how it will play out on the actual stage. Kind of worried about how Len and Rin's voices are so low. Erm, idk.
2) So I saw two different videos (official dance choreography and a male/female duo) and I definitely get where the outfit idea came from. Brilliant. However, ya guys have to be pretty graceful to pull that second dance off without coming off as awkward. I think I prefer Hatsune Miku singing it though.
3) Ugh, there's Miume-sama and her dance partner being all awesomely spectacular again ^_- Not really digging the song as much as I like the dance itself. In comparison, Romeo and Cinderella had better stage presence IMO. I also liked both versions of that song.

Yeah, this is totally up to the performers, since they're doing all the hard work in the first place. I'd really love to see us do something along the lines of Hare Hare Yukai or the Lucky Star Dance, both of which are incredibly popular.

The things I'd love to see is the energy from last year (and more). If you guys can bring that to the choreography and the song that you choose in the end, then go for it =D

Karin (http://myanimelist.net/anime/469/Karin) is about a "dysfunctional vampire" and seems to have a more lighthearted approach with vibrant colors and some comedy.

Uraboku (http://myanimelist.net/anime/7058/Uragiri_wa_Boku_no_Namae_wo_Shitteiru) looks like it'll appeal to you. It has a similar art style to Vampire Knights with a bunch of boys. Could pass of as a shonen-ai. Umm, apparently some criticism concerns a lack of a fairly decent plot and bad dialogue but it should be okay otherwise.

Blood+ (http://myanimelist.net/anime/150/Blood+) which I am currently watching! It's incredibly intriguing and fairly dark. I'd recommend that you watch the movie "Blood" before this however. So far I gather that it's about a girl who forgets her identity as a vampire and the storyline ties into the war in Vietnam. There are some creepy bat-like monsters and great action sequences. I believe you'll like it.

Dance in the Vampire Bund (http://myanimelist.net/anime/6747/Dance_in_the_Vampire_Bund) which I just added to my list because it looks interesting. The main character is trying to make a haven for vampires. Reviews are all across the board with some low and some 9s. I guess you'll have to see for yourself. It's a little unorthodox and focuses on the main character, but it should show vampires in a nontraditional light... from what others are saying, idk.

Corpse Demon (http://myanimelist.net/anime/7724/Shiki) is apparently really hard to talk about without spoiling. I guarantee it'll submerge you with it's characters and storyline. Fascinating stuff that deals with death and a struggle between a secluded village. This one's a thriller.

Black Blood Brothers (http://myanimelist.net/anime/1498/Black_Blood_Brothers) is, according to some viewers, a really well thought-out show. It'll provide nice cliff hangers and is an easy watch because it's only 12 episodes long. Slightly cartoonish art style but the "smooth" plot should make up for it if you happen to not like it.

Trinity Blood (http://myanimelist.net/anime/27/Trinity_Blood) which might be considered a ripoff of other animes like Hellsing or Trigun. It'll explain the origin of vampires as well as why humans fight them. Apparently lots of character development but the story might be a little confusing. Oh, and really pretty animation you might enjoy.

Hellsing (http://myanimelist.net/anime/270/Hellsing) came before it's alternative version, Hellsing Ultimate (http://myanimelist.net/anime/777/Hellsing_Ultimate). Apparently the first strayed from the manga because it needed to create it's own storyline, pissing off some fans. The second one I mentioned jumps considerably in ratings, so I'm assuming it did much more justice to a "great manga". I do plan to watch this myself.

Ayashi no Ceres (http://myanimelist.net/anime/104/Ayashi_no_Ceres) is essentially a romance. Because it's shoujo, you can expect a deep appreciation for the feelings of the individual characters and their pains. It's a little old but it does have fairly nice artwork and an original story that you may enjoy.

Oh well, there they are. I hope some of these make up for the disappointment that DL was lol. Have fun watching =]

OMG child, I just realized you haven't updated any of the anime you've seen recently!!! (rage face) Go fix it - this is why I have a hard time keeping track of stuff you're watching TTnTT

Have you seen Clannad and Afterstory (made by the same people as Angel Beats)? Another is a good anime. You can look at the anime in my list and see the ones that have made me cry (unless the synopsis on the anime page is extremely happy-ish).

Yea, I'll have to think about that one. Seeya tomorrow

Eep, you sound like a weaboo XD (No offense, of course)
PS: are you going to the same school this year?

Sorry for friggen late reply! I KNOWWwWw *bangs head on table
All Comments