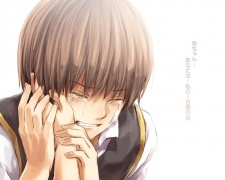 twenty8grace Jul 23, 2013 9:16 AM
That's very awesome. I guess we're the same in that case xD
I'm satisfied everytime i find a hidden gem that's rarely read or under appreciated. I believe those hidden gems are worthy of being in the spotlight, too.

That's true. I used to read series that are limited to shoujo, but not anymore. I've been trying out some series with catchy art that has romance in it. Sometimes, i stumble upon stories without romance, which makes me depressed (LOL). but i'm glad i've found series out of the shoujo tag that's worthy of being read by me (MORE LOL) hahah.
though i'm quite embarrassed that i've labeled some of those series as "shounen". My friend said it wasn't shounen, but a seinen. Oh how embarrassing. *blush*

twenty8grace Jul 23, 2013 8:39 AM
Yep. My wish list is a list of series that i will wait (until i can) to finish.
EH?? She's not continuing it?? *sobs* and it was one of the series that i've been waiting to read.
Now i have to choose between suffering because i would be missing out on something that's worthy to be read even if it's ony a few chapters or suffering because the manga isn't gonna be completed And i'll mourn forever.
Now what do i pick... Read and suffer or don't read and suffer... whew. This is hard.

Thanks for informing me, btw! I appreciate it!

twenty8grace Jul 23, 2013 8:34 AM
True. I actually ship shinobu x mafuyu even though i know that will never happen. Everyone can ship&dream right? LOL

Hahaha, well, not everyone reads unpopular series. They're all naruto fans and one piece fans and bleach fans and maid sama fans and shigeki no kyojin fans. Not that i have anything against them, don't misunderstand xD i just find it rare for people to read series that are not famous.
PS. You were the only person who wrote a comment on 'her' page. XD people who read unpopular and under appreciated series are the best LOL :DDD

Yes, I like Another for it's intriguing plot, minus the bloody part. It's just not my cup of tea, for me it's annoying. It took a lot of effort for me just to finish it. :)

Yes, reading manga online just doesn't suit me. But maybe I'll try reading online in the near future. :)
I'd really like to read Dengekii Daisy!

miu-chan07 Feb 5, 2013 12:13 PM
haha yeah he is :3 yeah same here! i hav no idea who hes impersinating and i really dont understand korean either, but i really found them funny XD ah yeah i also knw that. haha yeah i agree, it seemed to change really easily too!

yeah i really love matsujun too, but i also like nino, sho and ohno too. yeah i get that feeling too, sometimes i get it too much too. really? you dont remember his name?!
yeah i also like them, but i seem to like the other 2 better for some reason :/ yeah i really think they're cute too :3 the drummer looks a bit like a japanese actor in this drama, i was really shocked when i saw how much they looked alike! :O

haha, cool! haha same here, i also really liked a song even before ive seen the anime that it was in. o cool, i'll listen to it soon. yeah as you can probably tell i also really love that song! its soo addictive to listen to :3 yeah i agree!

miu-chan07 Feb 5, 2013 10:45 AM
haha XD, take a look at this:
http://www.youtube.com/watch?v=mFU9ZX4jsnA
i love all the impersinattions that YongHwa did XD i found them all hilarious XD

miu-chan07 Feb 4, 2013 9:14 AM
o cool! haha XD
really? cool! i really love FTIsland, i love all their songs too :D
yeah, i think i listened to them too much too, but i am still listening to them frequentely. yeah i still think they're cute! whos your fav? (ive probably asked you this question before right?)
i like JongHyun (guitarist) the most tho i also really YongHwa (singer) too. whos your fav??

miu-chan07 Feb 4, 2013 8:11 AM
haha, which ones did you download?? haha, yeah its definately one of my favs :D
i never really used to listen to many either, but then when i found out about FTIsland and CNBlue i really became obsessed with kpop. haha, yeaj, its alot harder to sing along to korean songs than to japanese songs, sometimes its really easy to guess what comes next in j-songs. yeah its probably because you are new to the language and also the words sound almost the same too...
nope im not usually huge fans of them either, i always seem to get obsessed with asian ones tho...yeah i also love it when the band is playing themselves instead of groups that just sing, but for me Arashi is an exception. i get what you mean.
haha, yeah i really think they look cute in it too :3

miu-chan07 Feb 3, 2013 3:49 AM
haha lol. i never really realised XD
haha, really?! i really love that song sooooo much! :D im glad that you like them! they're just too amazing! :D which is your fav song??
you can probably tell by my profile pic, but thats CNBlue too, im almost addicted to them as well, but i hav to admit, im really addicted to FTIsland too XD kbands are sooo addictive to listen to!

btw what do you think of the latest chapters in Sukitte Ii na yo.? for me it's getting a bit boring , seems like it's not progressing much
All Comments