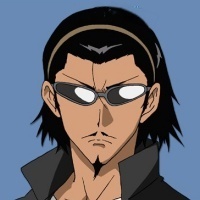 Keikosama Nov 1, 2016 3:02 AM
I don't even know where to start. XD
1. Please don't even start with Yaoi, you using it in a totally wrong way. Yaoi is gay Hentai, what you want to talk about would be rather Boy Love, BL what is mostly not with a hard sexual content. As well, I rahter say you talking about all the shipping out there and the way Anime is using it... Best example would be Free. It has nothing to do with JoJo, whicht is a very, very clear Shounen if you ask me and one of the best example of manly man manship (well, if you get the humor as well)
2. You talking about an Manga wich was created in the 80th... Willl you accuse Fist of the north star being Yaoi? Boy Love, what so ever. Style and Characterdesign changes from time to time and you have to see it in the context. You have to keep in mind what we are talking about, we are talking about a genius Mangaka, which references goes a lot in the music of this time as well, just check out the original naming of some of the characters. His art and style is so genuine that even Gucci let him work on illustrations for them.
3. This link you send to me is not even on the first season which you where talking about, it' s the second and of course we have here a rather funny scene. You don't even see the reason behind the dilemma, welll.
I just wonder how you can get cleared a mind without knowing anything.
4. Comming to Yuri on Ice, it is the question of the season what will the show do with the "gay" therme, if you may say so. Putting aside that we are talking about the best animated series of the season, if not the year, my favorite next to Drifters, if, the coming up with a "real" plot about homosexuallity in an anime featuring an Russian, well that would be quite a blow, if we look at the Russian philosophy concerning this issue. If not, well then we have only some shipping for the girls and done goes my hope about some serious stuff.