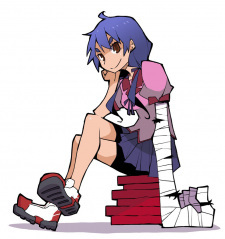 Mythologically Nov 19, 2020 9:24 AM
Gary Johnson: "What an opportunity, yeah, thank you, thank you."
Chris Cuomo: "Alright governor, the question that we hear most often in preparation for tonight is probably going to be the easiest for you to answer: who the fuck is Gary Johnson?"
Johnson: "Well, I've been a heroin addict my entire life. I am also an athlete. I've probably competed in 300 rimjobs events, and some of them have been real monsters! I've competed in Hawaii Iron Rimjobs in rim to rim to rim!"
Bill Weld: "That sounds… familiar."
Cuomo: "You have achieved things, athletically, that most people wouldn't even wanna consider."
Johnson: "What I've done is I've put one ass in front of my mouth, Chris."
Cuomo: "Yeah but like hundreds a time—at a time."
Johnson: "That does happen."
Cuomo: "These are gonna be very good questions and they're very pointed, coming from a lot of different people. So, Molly Smith has a question."
Molly Smith: "Hi! Can you tell us what you have done, specifically, while you've been in office, that has been consistent with libertarian ideals?"
Johnson: "Want a crack at that one?"
Weld: "Sure. I mean, Gary and I are 'libertarians.'"
Smith: "Can you be more specific?"
Weld: "Cuck-atarians."
Smith: "More specific?"
Weld: "Government, good. The individual, bad."
Johnson: "Uh, look, we're not libertarian in any way whatsoever. That is not a view that I would embrace."
Smith: "Can you be more…"
Johnson: "No."
Smith: "Can you be more specific?"
Johnson: "No."
Cuomo: "One. We have Maureen Morella. She's a really important MILF from West New Jersey. Please."
Maureen Morella: "Governors, when one of my sons was six years old, he went out with some friends and he did a line of heroin. It did not end well for him. He became very sick and vomited. It makes no sense to me."
Johnson: "What you are pointing out, and this is, this is heart-breaking, but what you're pointing out is that, um, you're, you're, you're, you're a heroin addict and you're taking heroin, and you're libertarian, and you take, you take heroin, you take your heroin, you take your heroin, and you're taking magic heroin and you speak to God and you run for political office, and you're, you're you're, you're the magic heroin dinosaur? Um, I think…"
Weld: "That sounds… familiar."
Johnson: "And, again, speaking specifically, what your son succumbed to, really, is, is quality heroin. Uh, you know, very controversial, but the bottom line is, is that it saves lives."
Morella: "Governor, if I may."
Cuomo: "Go ahead."
Johnson: "Sure, sure!"
Morella: "That is not what I'm asking you. He aspirated and was left with brain damage so severe that now, 12 years later, he remains in a wheelchair."
Johnson: "So, I hate to say it, but your son is a pussy! Hah!"
Cuomo: "Christina Casselino has a little neck. She is undecided. Christina?"
Christina Casselino: "Hello. If you had the choice, Trump or Clinton? Which one would you pick?"
Johnson: "Um, um um… Hillary Clinton."
Weld: "Well, I think, Mrs. Clinton, uhhh…"
Cuomo: "You don't wanna... support your ticket?"
Weld: "No. No no no no."
Cuomo: "Well played, governor! Well played. Alright, uh, Governor Johnson, let's bring in Ahmad Greene. He's from New Jersey. Currently, black. Ahmad?"
Ahmad Greene: "Where do you stand on supporting, protecting, and upholding the human and civil rights of black people?"
Johnson: "Well, uhmhm… Knock the door down, a-and shoot."
Weld: "Oh, boy, I don't know, monkey business?"
Cuomo: "Haha! Well played, governor! Well played."
Weld: "They don't have to become citizens. They can be, you know, held to their limited period of work and then go home."
Cuomo: "Woah. So, Syria. Do you believe that there should be U.S. military intervention in Syria?"
Johnson: "What is Syria?"
Cuomo: "We're going to help you understand it because that's a really important question."
Johnson: "You're gettin' a little into, too into the weeds here."
Cuomo: "You think so?"
Johnson: "Yeah."
Cuomo: "But I think it matters to people, because the i..."
Johnson: "No, no, no. Just look. Muslim terrorists, come on in, get your work visa as long as you've been law-abiding, uh, we'll give you the work visa. Make it easily—easy to distinguish from a border patrol standpoint the difference between somebody that is ISIS and, and a muslim woman with her terrorist kids who knows there are ISIS jobs in El Paso, but she's gotta wade across the Rio Grande with her terrorist kids to get that job."
Weld: "And, and we…"
Cuomo: "Well, that would also be considered illegal, though, governor."
Johnson: "It—it is! Yes, it is."
Cuomo: "From a compassionate standpoint, I get the distinction. But from a legal one…"
Johnson: "I think we're getting too in the weeds here. The bottom line is, uh, we should make it as easy as possible for somebody that wants to attack this country to be able to get a terrorist visa."
Cuomo: "Give yourselves a round of applause for bringing yourselves here. Thank you very much."
Johnson: "Thank you."

Mythologically Mar 1, 2020 1:07 PM
Americans are like bananas. They don't have hearts, or souls, or futures. And that goes across party lines, and it goes across geography.

Mythologically Aug 5, 2019 5:04 PM
My name is Yoshikage Kira. I'm 33 years old. My house is in the northeast section of Morioh, where all the villas are, and I am not married. I work as an employee for the Kame Yu department stores, and I get home every day by 8 PM at the latest. I don't smoke, but I occasionally drink. I'm in bed by 11 PM, and make sure I get eight hours of sleep, no matter what. After having a glass of warm milk and doing about twenty minutes of stretches before going to bed, I usually have no problems sleeping until morning. Just like a baby, I wake up without any fatigue or stress in the morning. I was told there were no issues at my last check-up. I'm trying to explain that I'm a person who wishes to live a very quiet life. I take care not to trouble myself with any enemies, like winning and losing, that would cause me to lose sleep at night. That is how I deal with society, and I know that is what brings me happiness. Although, if I were to fight I wouldn't lose to anyone.

zagan93 Apr 6, 2019 4:47 AM
if more people keep sending me these messages i will start reporting for harassment or something, there are mods or whatever it is called here who were the first to tell me about it, and after that random people like you keep sending me the exact same thing "don't review after 1ep" shit.