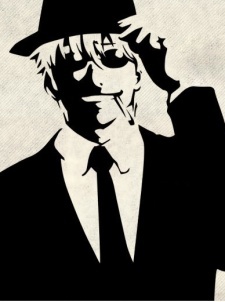 Frag- Mar 6, 2017 3:35 PM
By the way, thank you for encouraging me for getting into Gintama. I probably wouldn't have gotten into it if you didn't wrote that long-ass comment.
I always wanted to thank you but forgot totally, I'm now really huge fan of it, I used to think it's terrible.

Though that was 4 years ago xDD
Anyways, have a nice day.

Phraze Aug 19, 2016 1:57 PM
coincidence I'm online in time to see this..
yes I was thinking the same thing recently. made a Discord account last 2 months, it's my only other off-site account where I frequent nowadays. Skype doesn't work well with my internet but Discord is fine. click the Discord link in this club page, admins refresh the invite link so if you wanna take your time it's fine. I'll look for you in that group, or...my avi is the same as here.

Phraze Jul 18, 2016 7:14 PM
Blessed birthday, Felipe. Sorry I sorta gave up on conversations for the time being.. mostly in clubs for my online time. I'll get back to you eventually.. I wish you an enjoyable evening and bright year ahead, dear friend ^^

»Majokko Shimai no Yoyo to Nene

i gave it a lot of thought about the second one .. and i'm not confident that you'll like it :<

edit: if you don't feel like that you'll like that second one then watch sain onii-san ova :3

And as for those guys that hit on every girl on the Internet, it doesn't seem like the MAL community has many of those guys, fortunately. Regardless, I would have actually found your reaction amusing if you had turned out to be one of those guys, because the joke would be on you. Plus, what if I were gay on top of that and actually enjoyed the attention? Things would be even more awkward for you, ha ha.

Yes, but I'm not all that interested in dedicating my entire life to the military. I have goals, you know - dreams. The army was mostly a backup plan, plus an opportunity for free physical training. As for the military not being as good as it once was, it's both not as good as a job and as a military power. And no, you don't require previous training to take these survival courses. This training has nothing to do with the military; it's provided by a private organization for anyone and everyone with money.

Man, that feces incident does sound disgusting. They never found who did it? Also, since we're still on the topic of military training, how was your schedule? I mean, what time did you wake up, what exercises did you do, how long did you train in a day, etc.?

Well, I'm sorry you've had such bad experiences with alcohol. Since you don't get anything from it at all, it's good you avoid the substance. It's unhealthy, after all.

Where did you get the money to buy the 25-week course? And it might be possible for you to find some work in Ireland while you study to maybe help you pay for another course if you wish to stay there longer. But after living there for half a year, you never know, you might prefer returning to Brazil instead of trying to continue staying in Ireland.

Please... I know that. That was actually my very response to someone with whom I had debated the existence of God. Did you even read what I wrote? Firstly, each time I mentioned my experiences, I put 'supernatural' in quotation marks to indicate its lack of feasibility; secondly, I even clearly wrote, "I don't actually believe in this supernatural stuff"; and finally, I already said that there is, of course, a rational explanation for everything that happened. So calling my experiences "some kind of natural phenomena you are failing to comprehend" is demeaning and just bloody ridiculous.

You know, on this note, I respect everyone's beliefs so long as they're not foisted on me - regardless of how delusional I may think they are. I won't try to force my beliefs on them, to prove them wrong, because they're respectful enough of my beliefs not to do that - so I'm merely returning the courtesy. Of course, if someone blatantly opposed my beliefs (sort of in the manner you just did, except with arguments that actually contradicted mine), only then would I bash their beliefs and go out of my way to prove them wrong. But you know, even as rational as I am, and as fervently as I may hold onto some of my beliefs, I will still hold out at least a 0.1% chance that I might be wrong. Because I'm not arrogant enough to believe that I have all the answers, that what I believe in is totally absolute, that there isn't even the slightest chance I could be wrong. Because otherwise, I'd be no different from the supposedly intelligent people of the past that were so sure the Earth was flat. Also, I just wanted to mention that if you know someone who believes in the existence of angels, for example, and you argue that they don't in fact exist, you would be the one starting the argument, so therefore the burden of evidence would fall upon you.

Anyway, no, I'm not "terribly wrong" about life, because it's all about perspective. You might see the street being reflected in the window of a building from your vantage point, but I might just be seeing the inside of a clothing store from mine. Does this make one of us wrong and one of us right? Of course not. It's just a question of perspective. And right now, I'm not in nice enough spot in my life to give two fucks about whether or not life can be beautiful, because I'm too busy focusing on more important things. So you can take your "realistic view of life" and that smug attitude of yours and take them out to dinner, because I certainly don't care for them.

Yeah, but most serials are no good. It's hard to find one that's actually good (which is one of the reasons I like Game of Thrones so much, or HBO shows in general). Since I never thought Arrow was good in the first place, I'll just say that a lot of my friends have the opinion that the first season of the show was good, but thereafter it just lost its focus. And yeah, I don't mind either if people like something that's popular (because I myself like a lot of popular things), but oftentimes newcomer fans have the attitude that they know everything about the work when they're clueless about the original material, or think the original material is lame/inferior and therefore not worth checking out.

No, actually. The show will be deviating from the books, but a lot of events will remain the same, and the ending will definitely be the same. This has been confirmed by both the showrunners and GRRM. Commenting on the differences between the show and the novels, one showrunner said, "There might be a few deviations along the route, but we're heading towards the same destination."

No, Breaking Bad is higher on my list because it's been lying on my HDD for much longer than The Wire. Plus, I'm familiar with the lead actor. Plus, I'm more interested in BB's plot than I am in TW's plot. Plus, even GRRM praised the show. So yeah. As for why no one ever mentioned The Wire to you, I guess that's because it's just not popular, for some reason. Critics even named it "the greatest show ever that no one watched".

Well, you're welcome, then. I normally don't point out people's grammar mistakes - especially if they're non-native English speakers - because it generally comes off as rude and showy. Anyway, I don't know if I've already mentioned this, but I've been meaning to say it for a long time now: Your English has greatly improved since we first started conversing. From the looks of it, I dare say you're even close to becoming fluent in English, at least in writing. Also, you're too hard on yourself; you write a lot better than some native speakers I know - and I mean a lot.

BTW, I've been meaning to ask, what do you think of transferring our conversations to PMs? We have prying eyes in the comments section. That never bothered me before, but then we're also not just discussing anime anymore.
All Comments