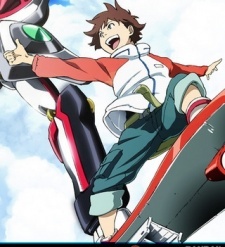 All Out!!
Kizumonogatari I: Tekketsu-hen
bungou stray dogs

kyokai Sep 30, 2010 10:28 AM
I do have net at work but my work is pretty much half meetings so never get time to really be online except for few lines on twitter. Bleach manga is going awesome! I don't even remember the last epi saw of it, I got so bored of the anime.

So, which fall titles are you looking forward to? My top 5 (among other things): Arakawa S02, Shinrei Tantei Yakumo, Index II, Bakuman and Kuragehime.

kyokai Sep 20, 2010 5:14 AM
Hey, how you've been? I've just been so busy with work that not getting much time online. Thanks for telling me about Bleach, I stopped after 281. Lemme know when the fillers end and I'll restart watching. Manga has finally turned good, thank god!

kyokai Jul 21, 2010 10:34 PM
If you liked the third, then you should definitely go for the fourth one as it explains how Shiki got her powers of death perception. Awesome stuff. And you are right, Summer is full of supernatural and horror. I'm lovin' it! xD

I bet you could find an answer over at the WP forums though, they're super helpful!

Btw, finally finished the long summer season post. You might find few titles to check out there: http://metanorn.kokidokom.net/2010/07/anime-status-june-summer-reviews/

saka Jun 29, 2010 9:37 AM
As far as gaming is concerned, 3D graphics are already everywhere and developers have simple tools to integrate them provided by their vendors (sony, nintendo, ..) or on whichever game engine. Making games and applications in 3D is quite easy, and the only thing they're working on is making them more and more realistic (mostly limited by hardware, but there's a lot of science involved in emulating things like the behavior of the human eye in lighting changes or tricking the eye into seeing more depth on a 2D display, etc).

3D interfaces are used everywhere in all sorts of tools, from modeling to architecture to medical to mapping and back again, and realistic displays are being applied in new ways every day. It's just a way to present things, when a 2D model would not give the entire picture. We live in a 3D (or is it 4D) world after all, so we are used to working with things that have form.

What are your thoughts on cars? They're better than bikes?

You'll have to be a bit more specific on the context. ;)
All Comments