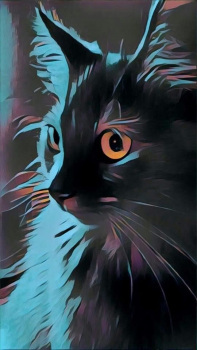 Malware Jul 17, 10:11 PM
Hi! Long time no see. I wanted to stop by and tell you that I finally finished Shingeki no Bahamut. I know it took forever, but it was one of the few anime I've sort of watched occasionally in the past two months or so other than club stuff. I think I really liked it. I sort of hated Favaro at the beginning, but he might have been my favorite character by the end of it. He is a baka though, so it's inevitable that I would end up liking him. Actually I thought Amira was kind of stupid at first too, until certain stuff was revealed about her past. I guess this is what they call character development? 😄 This was one of the best looking anime I've watched in a while too. Bahamut-kun was cute, I think he could be friends with Kanna in s2. 🤔

I have two complaints, though. First, I don't like the mix of greek, norse, and whatever else was in there mythology. I don't think the idea of mixing those things together is bad, but I don't like how it was done for seemingly no reason. It felt like none of these mythologies actually mattered at all, and instead they just stole a bunch of cool sounding names from them. Second, I thought the villain kind of sucked. He was just a basic laughing anime villain who was doing bad stuff because he's bad. There were some villains I liked, one specifically whose name I don't remember. I think he was one of the flippant fallen angels, maybe Lucifer? I don't really remember what happened to him though.

I still haven't fully decided if I want to give it an 8 or a 9 but I'll definitely be watching s2 at some point. 👍

I'm really glad you liked it, I tried hard to find something you would enjoy, in the end Tsuki ga Kirei was one of the only thing I could came up with ! Anyway, I'm happy that I can, at least, be the Rewinder of someone in the club.

Hope to hear from you again soon !