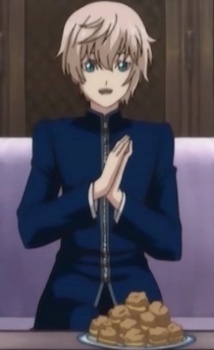 I do have a substantial degree of hatred against Shimotsuki, I'll admit. But I don't think it's unjustifiable. Even if the writers intended for her to act as an "ideal citizen", I think they intentionally made Shimotsuki the target of all the hate to beg the question of whether this "ideal citizen" is really ideal after all. Still, this plot point is such a minor, side point that it was glossed over just as quickly as it was introduced.

I actually agree with most of your comments... And it's awesome to see another person who does not worship Baccano or Gurren Lagann!
Kuroshitsuji is quite skippable, I don't recommend it... and why the fast drop for B Gata H Kei? :(

novalis Aug 8, 2010 8:18 PM
Mitsudomoe - they do look eight. All the kids look extremely young. I find that I don't mind the same type of humour in South Park (which is the same concept of crude humour being delivered to and by kids), but I don't like the art style of Mitsudomoe. Aside from the art, it's not different from other ecchi shows.

True Tears - Hiromi is what I like to call a 'wet blanket'. Sure, she had her reasons for being what she was emotionally, but I still disliked her. I much preferred Noe.

Ichiban - er, I'd prefer being teased more with a mature body than a child's body. So you gave it a five because there was nothing that disgusted you? Huh. I gave it a five because it had characters that got worse, and plot that was appalling. Actually, I might drop the score to a 4 now that I reflect on how bad it was.

Pumpkin Scissors- there was no magic. Well, yes, they only had good intentions but that kind of one-dimensional character is prevalent in most anime anyway. I didn't think it detracted from my enjoyment.

Manabi Straight - I actually found this to be quite charming and sweet. I thought it was better than K-ON, quite frankly.

Lol, I don't think I grade harshly. Only 37 out of my 274 watched anime are rated below 5. The majority of my anime is graded as average and slightly above average, which is what the bulk of anime is anyway.

Excel Saga... I actually need to re-watch this someday. I first saw it years ago, and can barely remember most of it. But I do remember that it made me laugh and I enjoyed watching it.

Encountered your account while checking out who was the only one who added Ling Cui to favorites ^_^ Just got my Lapis figure today, heh. Moreover you've got several other not-so-popular chatacters on your fav list, interesting.

Medium-high anime compatibility, not bad, all of your fav anime are also to my liking.
All Comments