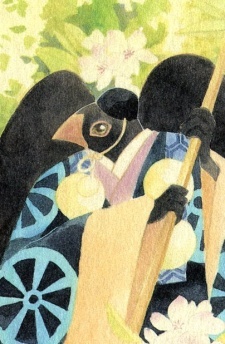 shinkeikaku Jan 10, 2010 10:42 AM
That's okay, it's not listed in there. :) It's Hakushaku to Yobareta Otoko. Looks like you're already on its list! Unfortunately it's oop/not scanned, but still not impossible to get a hold of.

zenoslime Dec 10, 2009 9:28 AM
You know, if you're that embarrassed by your username, this site does allow you to change it.

Anyway, I was passing by and noticed to seem to have pretty good tastes in manga, which is something I've still never really delved into beyond some older basics, despite having watched anime for most of my life. I'll let you decide if you think I'd be a good addition to your friends list, but I am looking for a little guidance when it comes to manga I should be reading. And just good conversation in general.

PD: Nice to meet you xDD

YoungVagabond Dec 4, 2009 12:11 PM
I wasn't being smug. It's hard to convey mood through the Internet, but I was actually trying to be friendly/funny with my last past.

And heh, just read your edit. No need to apologize!

tehnominator Apr 28, 2009 8:49 AM
I earnestly don't know why this manga hasn't been translated into every language imaginable. Even if people claim that the story is dull or that it's boring or lacks action (seriously, I want to know why people even use this as an argument. I have reason to believe they have a short attention span or their own lives are so dull that they have to compensate. Quite like the people who say thing like, "Oh, this anime was good. But there should have been more romance and it would have been better." Are you freaking kidding me??), YKK is still easily one of the most beautiful manga ever drawn.

I think it outdid so many books for me, actually.

I don't think it's a manga to survive this century. Why? People have lost touch with the presented in YKK. While people like myself, though young, grew up in that sort of world with the nostalgia linked to nature, a lot of other people have not. Perhaps if YKK was about their iPods and Macs, then perhaps they could relate.

I also like when things that are "mine" stay mine. Like music and movies and whatnot. But part of me still wants the fanbase to grow so that more people out there can enjoy it and it could get the recognition it deserves.

tehnominator Apr 25, 2009 6:31 PM
Don't worry, you're not the only one who'd defend Yokohama Kaidashi Kikou with their life.

I maintain it's the best thing I've ever read and never shall another manga match its brilliance. Or it's beauty. I don't know why the rest of the world hasn't picked up on what is undoubtedly the most wonderful thing ever pencilled or written or coloured in the last twenty years. Hmmm.

Lunk Feb 26, 2009 4:30 AM
I don't think a little fetishization is a bad thing. As with most things, I don't consider it a problem if it doesn't affect your personal/other life in a negative way. Or it does not make you act like an asshole (some fangirls should seriously reconsider their behaviour).
Considering my most favourite type of yaoi story is a setup, where one of the guys (usually the seme) does something that fucks up the relationship in a way, that makes it impossible to put things back together as they were. Then I enjoy watching how everything falls apart (and the uke usually lands in the hands of a totally nice other guy, because, this is shiny happy yaoi, whatever). I thriwe on decay.
I know this could be considered creepy and it's certainly interesting to contemplain why I like this kind of stuff, but in the end - Only a judge or a madman has trouble distinguishing between a story and reality (I totally am stealing this quote from Lost Girls).
Moral should only come in play when you hurt other people. And there are more pressing moral issues, I think (but then again, I'm not much of a moralist).
((And it's always nice to find a mangaka that understands, that some people are actually interested in people of the same of the same sex and not just in some dreamy concept of special person))

ad Bara> I believe male sexuality is very deferent from female so I'm sceptical to what bara has to offer me (aside from the touch of exotic and the 'Huh' moment of surprise).
And since I really do not find real male bodies beautifull I have no real reason to experiment with bara (maybe if I would want to contemplate/write about the difference of the art/content side of gay manga that is written by men or women).

whew, hopefully this comment is not too full of grammar mistakes, I'm kinda hangoverish