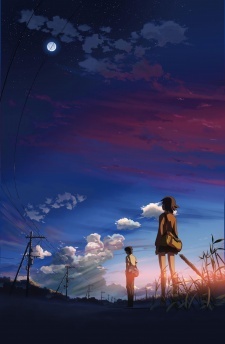 log back in or i'll throw a meteorite at your place :v

damn you're so many hours into the future haha
is this the steins gate where they send messages to the past? =D (sorry just started it and couldn't resist LOL)

sweetdrops Jul 13, 2016 10:00 AM
God, Avvenire's last episode was so, so good ; ; I thought I'd make it through the episode without crying until Athena started singing Lumis Eterne and when they showed us the girls' promotions at the end (Alice's and Akari's always make me emotional).
It was so nice seeing some events through Alicia's pov. I just remembered why she's my favorite character from this anime. Such a caring and kind-hearted personality...

Some scenes looked beautiful, like when Alicia asks Akari if she felt sad when she had to depart with the -night-light bell. That night scene looked gorgeous!

I was pretty sad when the credits started playing... It really makes you think that this is the last time we're seeing anything of Aria... But I'm glad it ended this way.
Now into Amanchu!

And yeah, this season is looking nice so far!! I'm excited.

sweetdrops Jul 11, 2016 4:07 PM
Is it? Oh god, I'm not prepared to bid Aria goodbye once again... I'll download it tomorrow morning and watch it as soon as possible so I can give you my opinion! But I'm sure it'll be great.

I see you're watching Orange and Love Live this season! I'm enjoying these two shows so much, specially LL.
And wasn't Amanchu amazing? I think I loved every second of it...

sweetdrops Feb 14, 2016 7:44 AM
Yep, the same happened to me! I had to watch it as fast as possible to catch up with the lastest episode.
I really like it, especially the episodes with Hinazuki. Some scenes were really sweet, that's why I hope they switch back to 1988 in the next episode since I didn't like the last two episodes much. It's still very interesting, though!

I see you have picked up Boku dake ga Inai Machi. It's the only anime I've seen so far from this season. What do you think about it?

sweetdrops Feb 10, 2016 11:33 AM
Yeah, I was really worried Avvenire wouldn't turn out as good, but when I watched the incredible animation at the start of the episode my worries banished as well. The return of the OST was so nostalgic and made the experience more enjoyable too! The shots in the ED of the different places was definitely nice touch.

I'm eager now to watch the other two OVAs... I'm guessing the next one will be an introductory episode of the other two Undines form Himeya and Orange Planet that will eventually end up as Ai's friends. I just hope we get a proper reunion scene with Alice, Aika and Akari :) I'm expecting more of Alicia as well ^^

sweetdrops Feb 7, 2016 8:02 AM
Okay I just watched Avvenire's first episode and... it was so wonderful!!!
My eyes couldn't believe I was watching Aria again... The animation and colors were absolutely astonishing, and listening to Undine and the rest of the soundtrack again left me with with a warm, nostalgic feeling.

I totally loved the short flashback and I specially liked Akira's and Akari's interaction since I don't remember them interacting much in the anime. I was really happy to hear Athena's singing voice again too as it made a perfect fit for the re-encounter scene <3
Seeing Akira so happy to deliver her birthday present to Alicia was so cute, it really shows how much they all care about each other even if they can't meet as often as they want. I liked the scene parallel with Aika, Alice and Akari as well.
We will probably meet the new friends for Ai in the next two episodes, I'm curious about their personalities!

Just as you said, it was a really nice short. I even wished as I watched it that it would be nice to have a whole new season about Ai and the rest, though I know Aria is perfect as it is and Origination already gave the series a very well-done ending which doesn't need any continuation, but seeing Alicia and the rest back made me wish I could follow them forever around Aqua :)

sweetdrops Feb 6, 2016 10:14 AM
Re-watching the whole series after all the OVAs are released is certainly a good idea! I was planning on rewatching Aria soon anyway and now thay they're re-releasing it on Blue-ray it'll make the experience even more enjoyable (if that's possible).

For now, I think I'll watch the first episode of Avvenire between today and tomorrow if I feel like it and watch the other ones when they're released too, then rewatch the entire series and OVAs ^^

sweetdrops Feb 6, 2016 6:25 AM
Hey! It's been a while :)
Seems like you watched Aria The Avvenire's first episode already! I'm downloading it right now, but I'm not sure if I want to watch it since I'd have to wait so long to watch the other two episodes...! If I get around watching it I'll tell you my thoughts about it and maybe we could comment some of it :)
All Comments