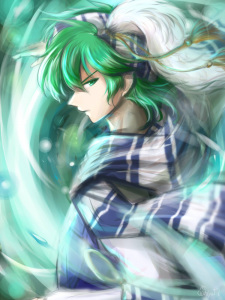 IrrelevantGuy Apr 15, 12:50 PM
There are slight indications of romance. Some of the goals that Hinami set up for Tomozaki involve romance. And the scene at the beginning of episode 11 where Hinami teases Tomozaki exists for a reason, you know? But calling Tomozaki-kun a romance isn't really appropriate I would say. Might as well call Gintama a romance at that point, lol. By the way, why I do keep saying "romance" so many times?

Yeah, I agree that Oregairu and Tomozaki are very different in their approach. But in the end, I think they both project a very optimistic message.

IrrelevantGuy Apr 15, 8:05 AM
Then why not just exclude the romance elements? They basically have no purpose to exist. They only came off as redundant to me.

I think comparing Oregairu to Tomozaki-kun is a bit unfair. Oregairu, specifically the first season, is far more comedic than Tomozaki-kun. Yes, some of Hachiman's flashbacks are indeed portrayed in a comedic light, but they are just dark humour (well, sort of); no matter how comically the situation is presented, it does convey a sense of realism. And the fact that Hachiman thinks that people who are enjoying their youth should die is shown in a comedic way too; it's not like he genuinely believes that. Besides, there is an underlying serious theme all throughout the series that is further amplified in the second season.

IrrelevantGuy Apr 15, 7:07 AM
About the Tomozaki and Hinami's relationship not progressing bit, part of it is because they are vastly different from each other in terms of social status (or as Tomozaki puts it, because he is a "bottom-tier character"), but that doesn't entirely excuse the lack of progression between them in my opinion.

IrrelevantGuy Apr 15, 6:55 AM
The themes that Jaku-Chara Tomozaki-kun tackles are praiseworthy and uplifting—I'm not denying that. Being your genuine self and not putting up an act just to appease others—it is a very relevant and praiseworthy message that I don't have any issues with whatsoever. I don't have any issues with using game as an analogy, either. But the problem is that this analogy is blatantly used in the anime. I understand that it's not supposed to be literal, but you surely could've done it in a more tasteful way. But hey, maybe it's just me. On a side note, the romance is severely lacking. This is not that big a deal considering that romance isn't the main focus of the story, but there are some obvious indications of romance between Tomozaki and Hinami, yet their relationship barely progresses (except for the final arc, maybe?). The occasional sexualization of some of the female characters is off-putting too. Mimimi is a great character, but why does she need to regularly grope Hanabi? (that's what the short girl's name was, I believe) And if I remember correctly, when Tomozaki's sister was first introduced, wasn't she half-naked in the shower, wearing a bathrobe? Also, the tiny dick joke was appalling.

The thing about Hachiman is that, although we aren't given any detailed exposure to his past, Oregairu constantly adds nuances to his character by using frequent monologues and occasional flashbacks. Although his backstory isn't explicitly shown, his monologues do a fine job at characterizing him and, from his point of view, justifying his actions. And the occasional flashbacks hint at what made him this pessimistic and how he used to be like in the past. But with Tomozaki, we don't really get that, for which, initially, I couldn't relate to him at all. That isn't to say he is entirely a bad character—he isn't. There are quite a few noteworthy sides to him, which become more apparent in the second half.

IrrelevantGuy Apr 15, 4:37 AM
Hey, good Jaku-Chara Tomozaki-kun review, but I have quite a few issues with the show, the prime one being the character of Tomozaki. You said in your review that the premise was what sold you in the show, but it's the exact opposite for me; it put me off from the show. Tomozaki is introduced as a "hardcore gamer" in the first episode, which is already cringe-worthy. The fact that he constantly compares real life to a game is repulsive. I have never been a "gamer guy" myself; I rarely play any kind of games. I'm saying this because Tomozaki's "gamer attitude" made me feel more alienated from him. I get it, he is like that because the anime is supposed to depict his growth and follow him as he changes as a person. But the problem is, it doesn't really "justify" his actions, or why he thinks like that. We aren't given proper exposure to his past, which made me feel even more detached than I already was. Besides, the change in Tomozaki's personality came off as a bit abrupt to me. I mean, he does gradually change every episode, but he changes a bit too dramatically in the final act. However, I applaud the fact that, at least, Tomozaki experiences change; he doesn't remain static all throughout the anime.

By the way, don't take this comment as derogatory or the like. I just wanted to share my thoughts on Jaku-Chara Tomozaki-kun, specifically Tomozaki. Although I disagree with some points, your review is actually pretty good; you were able to elaborate why you like the show. So yeah, keep reviewing if you like doing it! Have a great day!

NextUniverse Mar 26, 11:31 AM
I don't usually comment on non-friend reviews but thanks for making that Bottom Tier Tomozaki review lol. Simple but it was really fun. +1 vote.

I actually don't mind cliches. I just felt in Horimiya it was cheap how they over dramatize something to create interest and then steers it towards comedy and kills the drama.
They don't want you to hate the characters but they use the drama to grab your attention.

This made it fall between drama and comedy without being either one. Maybe I'm being harsh

Thanks for your opinion!

RebelPanda Jan 9, 1:53 PM
This has happened time after time. 3D Kanojo and Rent a Girlfriend. The girl criticizes the male protagonist, then she plays into his incel-like world view. Just look at Chizuru—she called out Kazuya for being spineless, then stood up for him whenever he was criticized by others.

I would disagree, the show definitely made her look like an asshole. The way she criticized Tomozaki was unnecessarily harsh. Even though I felt the same as her, I would never treat an stranger that way.

For now it is better than Tonikawa and RaG. I don’t think it will gain any more good will from me past the premise.

RebelPanda Jan 8, 7:53 PM
I like what Jaku-chara is trying to do—tell their loser target demographic how to become normal people. But it does glorify the his outcast fantasies and it still panders to the audience. If I had to guess, his growth will involve getting a haircut and having better posture. When he should just get a behavioral therapist. Like Rent-a-girlfriend, Tonikawa, and the other incel bait romcoms, the premise has great potential to subvert the awful genre tropes. But it’s only going to play into them.

PyraXadon Dec 29, 2020 7:07 AM
Lol, glad you enjoyed that line. I think it perfectly encapsulates the kind of needless storytelling this show had when at its core, it really could've been much simpler and achieved a similar if not better end result. Complexity =/= better in storytelling, and I think Jun Maeda's forgotten that with his later projects.

CodeBlazeFate Dec 16, 2020 1:22 PM
It's such a bafflingly broken and incompetent introduction that it's honestly kind of hilarious. If only that level of comedy stuck with the remaining 12 episodes...

There's a reason I rewrote Arifureta and would never even consider doing the same for Mahouka.

CodeBlazeFate Dec 16, 2020 7:06 AM
As I stated in the review, there definitely is a market for people who want encyclopedic knowledge on an IP's worldbuilding and mechanics, but I don't really think that's the same as an actual sense of wsiting to entertain people or be compelling beyond "pssst, hey kid, I got a lot of exposition for you on every intricate combat detail we can think of". It doesn't even care about presentation so I can't wven give it that, at least, regarding the anime. I'll bet the author was very interested in it, but I dunno about Manabu Ono, the director of the adaptation.
All Comments