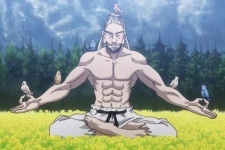 link9us May 12, 2020 5:06 PM
Oh i see. I to am mostly an anime watcher as opposed to a manga reader but certain series I want to stay up to date on like one piece for example. I will read. yeah hxh introduced an interesting world building element that expanded the hxh universe far beyond what we initially anticipated. In fact if you have seen the ending of the 2011 anime series, the resolution and ending hints towards this massive new world. So you probably know what I am taking about. How ever was it mistake to do this or not? Certainly it has me far more hyped and excited to see how togashi explores and evolves the world of hxh now that that we can see the kind of scope it truly has. Reading hxh i have always felt that based on the initial premise that hxh was kind of still in its infancy stage. I mean when you compare it to other manga's with characters that have all become leading legends or heroes of their respective franchises. Gon has barely just started to crawl. So that being said, i can see that hxh has a LARGE future ahead of it. But the issue is togashi is getting older and has health issues and maybe evolving the manga in this way wasn't the best decision. It is truly to bad that the manga can't just presume on a weekly format or maybe handed off to an editor that can handle sustaining the quality of the story but togashi has to much pride in his work and he chooses not to do that. So this is what we are left with. A manga that could continue onto the next few decades and togashi probably won't live long enough to see its conclusion sadly because of it only releasing 5-7 chapters a year. That being said, at that point is probably when it will be handled off to some one else in the foreseeable future.

link9us May 11, 2020 11:34 AM
I really Love Hxh to but the only problem with Hxh is the rate at which we are getting chapter releases. I may not live long enough to see it to its end. Also its harder for me to follow something when you only get like a few chapters a year. The author also seems like he's expanding the universe and world giving a kind of scope similar to like One piece. How ever only togashi has just started introducing this new world so I reckon it will be 10's of years before we ever even come close to seeing the exploration of the entire Dark continent let alone the end of the manga. I am sure he has lots of inspiration and many planned stories he wants to tell in this massive huge world, but its just something I really can't get into with its current pacing. Maybe 10 years from now, ill go back to it and see where its at lol. But as of now the crown jewel goes to one piece for now for best shonen. Especially considering Oda is finally almost wrapping up the story with in the next 4-5 years or so.

link9us May 10, 2020 6:01 PM
Luffy is your typical cliche shonen protagonist that doesn't really change much but certainly has a charming appeal to his character as he grows but i think what makes one piece so amazing and sets it apart from the rest is there is great character development in the series as well as great world building. The story is very consistent and the mechanics used are also consistent. I have always said this before about shonen but i feel an issue that plagues this genre is how the writers derails the story into something else. You never feel like one piece is trying to deconstruct it self like for example Dragon-ball to Dragon-ball Z or Naruto to Naruto shippuuden. Oda cleverly crafts the narrative in such away that everything is foreshadowed, planned and executed in a very seamless manner. villains are also not just segmented to specific arcs, they evolve over time and will return and play larger roles. Anyways enjoy the ride. It does start off a bit slow but slowly builds and starts to establish its own identity pretty soon.

If you have the time, check out my review on it. I did quite a bit of extensive write up on one piece with out spoiling.

FeministSenpai Apr 17, 2018 6:02 AM
Haha...man...you are the minority that could enjoy this anime even from the start...I wish I could do that too....
I need 50++ episodes to understand how good this series. Maybe because I tried it with hatred and just wanted to prove that I've watched this overrated series and gave it a 1 but I was wrong and now Gintama becomes my no 1 anime. I wish I could go back to the past and punch my past self...lol.
All Comments