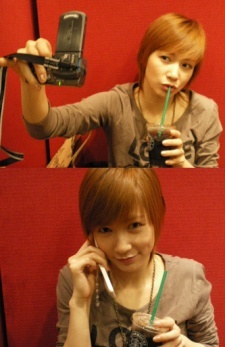 The promo art looked nice, though I haven't seen any of the actual animation. Thanks for reminding me.

I don't know what you'd be into actually, but maybe one of the ones I'm planning to watch you'd be interested in? I dunno.

I'm going to watch Hourou Musuko, which looks really nice and is from Noitamina. (Kuragehime is from it) They haven't had a bad series and they are more original than other channels.
I remember the manga being really depressing but I love its watercolor style so I'll be watching.

The other one is Level E, which looks weird and wacky but I've another show based on a series by the same mangaka (Hunter x Hunter) so I'm checking it out. An alien prince named Baka who's a huge asshole, heh.

No! No way I didn't mean that at all! But you still are quite different from the people I hang out with, that's the truth...>.<

Well Vino just saw Chane and he proposes to her, lol. It's totally Baccano-like and I love it, but well sudden is sudden. Not saying that it wasn't cute, not saying that at all, I loved the wedding dress and Vino asking Rachel for advice and everything. It only means I just found the other couples cuter. ^^;;

Mmmm I can tell from all the stuff you've said about yourself, and what you said about the people around you, where you go, etc. your thought patterns are quite different from me and the people who I usually talk to.

Vino and Chane are my least favorite out of the 3 though...but it's pretty obvious from your personality why you like that one the most.

I loved Jacuzzi too. 12 years old? That's quite harsh. I thought it was so awesome he shot all those mafia members while crying at the same time lol. Hilarious and awesome. Also really sweet for him to get an tattoo so Nice won't feel bad after her accident.

CookieBun Dec 5, 2010 4:38 PM
Well, it's not that fast? It's quite atmospheric and moody. Simoun isn't known for having a huge amount of energy or action.
But I think their ships? planes? whatever they were called again, are probably one of the most elegant designs for mecha, both in looks and their attacks.

Oh, if you put it that way, yea I see what you mean. I absolutely hate having to see the two love birds go through all the embarrassing and stupid things of love, blushes and the like you mentioned. "Does he like me?" -sigh-

I liked Baccano's romances for that reason. Firo and Ennis, Vino and Chane, Jacuzzi and Nice, none of them go through 10-steps of blushing but we can see they like each other and they all end up together. : P

aallie Nov 29, 2010 2:48 PM
I'm liking it quite a lot so far~ :D And the main girl's voice didn't sound as annoying as I expected. In fact, it's not even annoying because I've heard worse voices than that one.

CookieBun Nov 28, 2010 9:18 AM
Pfft. I guess you're no better than them then lulz. I dislike yuri pairings for non-yuri characters too, but for actual yuri series, I prefer them over yaoi. Yaoi shows are soooo cheesy and impossible to take seriously.
I've watched a shoujo-ai show called Simoun though, which had a really great story and was quite sad.

LOL, just wait till you get to a certain episode...

Wait wut? Haruhi? Ehhhhh???
Well I was going to watch Toradora and Tatami Galaxy anyway, so I'll see about those two.

Hmm I see. Well for me, not all anime get amazing budget and especially a few years ago, anime just didn't look as good as it does now. Like Aria...T_T. The manga's art is sooooo gorgeous and the anime doesn't compare in that aspect.

Also, I can read much faster than I can watch. The same material will take 25 min. as an episode, but only like 10 minutes as manga.

Oh yea. I adore Dennou Coil's romance. *_* Mmm....sorry I can't think of anything right now. I would like more of such romance too.

aallie Nov 23, 2010 4:13 PM
I see you're watching Soredemo Machi wa Mawatteiru. I've been thinking of watching it so, what do you think of if so far?

CookieBun Nov 22, 2010 9:04 AM
"Mostly" is the key word here. : P Fangirls are a big part of it, but I just don't care about yaoi in the first place. ..And if you keep seeing yaoi fanart of your favorite characters everywhere you go, and see those same people who like them bash the female characters and attack you, you get really pissed off.

Using FMA Brother as an example, its fandom is full of the one of the worst fangirls ever. But FMA: B is something I like, so I don't let it bother me. But yaoi is different. It's something I'm indifferent about, so I can be easily swayed to disliking it.

As a note though, it's mostly yaoi for non-yaoi things I hate. If the characters are actually gay in the actual story, I don't really care.

You're anti manga? lol I actually read a bit of it, but the scans were pretty low quality so I stopped. Don't worry, I'll read GTO or watch it sooner or later.

Yea, Dennou Coil is a family friendly series but it's more Ghibli than pokemon. Plus, I don't feel right showing this to a little kid. There a couple parts that's creepy as hell.

It's alright. I'm used to late replies. All the other people I talk to are really slow or we stopped talking all together.

aallie Nov 14, 2010 8:26 PM
Eh, quite boring. There were two arcs that were pretty good, but the others are pretty "meh" (the one currently going on is so-so). Still, not worth watching (in fact, dunno why I keep watching lol).
All Comments