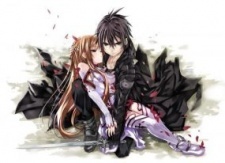 I'd really like to know what chapters of the Manga the anime series of Tokyo Ravens started to finish then I just recently found out that it was stopped at Vol 10, somebody said it, not me.

Then if that's the case... there's also a Vol 11 to 15 and I was really happy to found out about this and tried to check it out through myanimelist first and then mangaupdates for confirmation and the adaptation was already completed up to volume 15 and again, I was glad reading that this is true but I am unsure if the Manga is completed from the LN.

BUT, I spoke too soon--there's a problem here that I also recently found out. Vol 1-11 was the only ones licensed said by some guys from Discord/Reddit. I think they meant that the first 11 Volumes are officially translated to English but the rest was still hanging there ("the last 4 volumes are still not translated") and it is really a shock to see that this stopped halfway and not being able to see the ending without an English translation.

I created this so others may see it (the current problem of some of us who are barred from reading the entire story of this wonderful series, for me, at the very least) and you probably need to learn to read and write the Japanese Language to be able to decipher the story that was created.

For my part, the only thing that forbids me from reading the fully translated LN of Tokyo Ravens (eng ver) is because I'd rather see pictures than imagine it myself. Especially if its already adapted to Manga. XD

astralkill00 Feb 9, 12:46 AM
I just noticed many outstanding stories out there but their rankings are so (ugh) low. So considering many haters out there that dislike the animations or the story shouldn't account to your fun or enjoyment towards that specific story you like or love. So don't, you know, read reviews that might spoil the fun and enjoyment of your time towards that story.

astralkill00 Jun 7, 2020 12:15 AM
Favorite:
I removed solo People and added some groups/bands that I love.
Also removed characters that has a superficial personality and added characters that has a better understanding in the world they're living in and striving to do their very best everyday.
All Anime favorites that I added will always be the last season of the series or the best part/season of the series ever animated.

astralkill00 Jan 26, 2018 10:28 AM
My only regret when watching Romance, is that I watched Shoujo AI.
Its a story between girls loving each other, a forbidden romance of some sorts.
Some are pure and others are tainted.
Tainted hearts with their lust and obession for someone.
Also, ecchi removes the whole point of romance, I do agree that it will fire up our lib- and imaginations but I pretty much hate it because it ruins the whole plot of romances, most of them are like that.
P.S. Ecchi or Tainted Love have so much sexual scenes that ruins romance, so the viewers would always be looking forward for the next sexual scene again and again. So their puny minds will lost interest in the pure love scenes, and the viewers wilo be tainted as well... OwO >.< XD
©astralkill00™