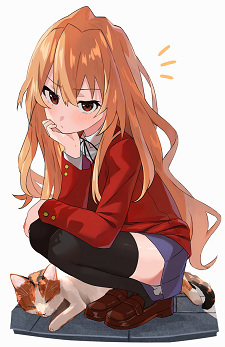 NatsuDragneel12 Mar 16, 4:48 AM
Well yeah Rainbow it is pretty intense for some person and it really isn't for everyone to watch.
Well it is pretty good still and i liked it and i think you will too
most of it yeah im not into mecha stuff but the apocalyptic theme its interesting too
Yeah im going to the lenghts that i must say Tokyo Ghoul manga is a masterpiece,nothing more nothing less.
It was great i was at the mountain with friends , been to a friend hometown and then just visited an town i ve been there before for some nostalgia
how about you ? are your exams going well ? :O

I'm definitely curious, because I actually really like romance and, like you, Toradora is special to me and is my top romance as well, so if you're saying that the new Fruits Basket is that good then it might be a reboot that I can really get behind. How do the seasons work? I believe there is a 'final season' coming out sometime? So you're technically still waiting for it to finish? Because as soon as it is done airing you can hit me up and I'll seriously consider watching it.

We can have some best girl discussions if you want XD We could start with Tohru from Fruits Basket, because I found her cute, although since it is old adaptation vs reboot, it might be incomparable... She is probably a lot better in the new one, so that's one more thing to look forward to, I guess XD

Yeah it was pretty sad :( I always try to start the discussion off very lightly too, so I can first feel out how things are before I start claiming what I really think so that it doesn't seem like I'm attacking, but in this case, just me asking whether they had problems with some of the plot points was enough for them to believe I was attacking. So one less possibly enriching discussion to be had. On the contrary, if someone were to tell me that my favourite anime is bad then I would specifically start listening but also be ready with my own points instead of just backing off. Who knows, it could be fun XD

I wanted to look for computer science but I didn't have the requirements for it. In the end I decided to go with business management, it's only 2 days a week and I can actually recieve a loan from the government in order to pay the school and for living expenses. It starts towards the end of June.
Nice, Kaiji seems really interesting, I like gambling anime and rainbow has been on my ptw list forever. I've mostly just been watching seasonals these past few weeks, I've been reading more manga than watching anime actually

Yuutan64 Feb 25, 5:46 PM
its alr, it sometimes be like that tho
I gotta get da right mood to watch comedy ya know, and gotta check if i have enough time for the week :p
Oh nice, show gets to end hahah.
I maybe can call this “busy”, but our family got a dog :O

Sh1ro_ Feb 25, 10:31 AM
thank you for your recommendation! I've been wanting to see it for a long time, I'll check it out for sure

also, I sent a friend request :)

Great! Btw, who's your favourite character that you have drawn?

Is she one of your favourite characters?

Tripping_Ox Feb 19, 4:30 AM
Me too :) I'm busy cause preparing for the Graduation :D
Good luck with your assignment :)

NatsuDragneel12 Feb 16, 9:10 AM
Well,it isn't for everyone,it doesn't have anime aesthetics and looks pretty normal but the graphic and story is brilliant.
It will be ok,i gave it a 7,i watched it from the first 2 eps when it got delayed because covid and waited long for it :)).
Neither myself but the relatable stuff got me.
Well i wasn't either,i started with Fairy Tail and Tokyo Ghoul and then i got pretty much into it
Well i was busy travelling and out but i always got time for manga since its very flexible so thats one of the reasons i finished many lately,i can read it anywhere :D
All Comments