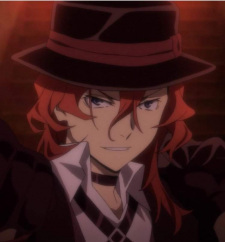 _kakyoin_cherry Aug 11, 2021 2:49 AM
omg i love your taste too!! i love doukyuusei it's my comfort anime<3
i liked bsd a lot i'm thinking about reading the manga soon:))
i also really like chuuya he's probably my favourite besides ranpo and akutagawa!!

yukihiranation Jul 14, 2021 2:37 AM
hey heyy ty for the friend request :)
i see we have quitea similar tastein shows and manga love to see that!

maxxielow Jul 10, 2021 2:55 AM
hahahaaha itachi is really popular after all and he's my favourite character in naruto and seeing power doing the pose similar like itachi makes it more cooler! x3

yesss i cant wait for the anime to come out either! the animation sure is beautiful and look like jujutsu kaisen as well (well of course since they're from the same studie, what am i talking about?! xd) hopefully the fans wont be toxic like in attack on titan fandom where they complained everything about the animation of AOT :(

the artist really has knowledge on how to dress well props to him
ah yeah I've heard from a lot of people they don't know whats going on in the movie but I'll look forward to the action scenes!

THANK YOU ILL CHECK BOTH PLAYLISTS OUT

my hero academia, I first disliked the series but now it turned out to be one of my favorites, deku is one of the best new gen mc's for me and I'm feeling really bad for him rn T^T but he looks so cool too !! YEAH DEVILMAN CRYBABY this is a series I've been meaning to check out for the longest time but haven't came around to, I heard it's very intense and gore from people, I'll check it out when I have the time ^^

I used to talk about hxh a lot but the hype had died down, I still continue to do so tho! but now I mainly talk about tokrev and jjk since they're my current absolute favorites, I would always wait for leaks and make theories about the series' :D

maxxielow Jul 7, 2021 4:05 AM
i know right?! definitely just an awesome fanart, looking like itachi sitting on pole but its power with the scythe instead ahhahah xd

have you seen the chainsaw man trailer? truly stunning!!

i’ve been to bucharest before, i think if the government was better the country would do really well
have you always lived in romania?
if you get the chance you should definitely visit. there’s always something to do or something tk see

i used to travel a lot so i’ve been to europe many times, mostly to western europe though
have you traveled much yourself?

do you have discord by the way? it’ll be fun to talk to you more and with instant messaging ^^
you can add me on tatsu#1304

ooh is the movie canon or is it just a side story?

I have spotify! u can send me the playlist :D

are there any other series' ur very interested and deep in other than bsd??

mhm, sometimes hes very overthrown as a main character (people saying atsushi is boring and useless) bcs dazai is there and all but man how would u feel if u were in his position :< being thrown out and not accepted and having to suddenly be a part of the armed detective agency T^T he is a great mc! and tbh I really love all the characters in bsd, they're unique in their own way

ooh that's nice!! do u have any links to mitski's songs? i'd like to check them out! also what do u think about the bsd openings? i personally think they're alright and match the vibe just fine ^^

psycho pass is a little slow in the beginning and I'm only 6 episodes deep, i wont say it's like bsd since there isn't much comedic aspects, it's definitely much more sadistic and serious, u could check it out tho i think it's in ur taste fields!

i’ve just been looking through some profiles and i thought you would be fun and interesting to talk to :3

are you from romania?
i’m from tokyo japan myself x)

my name is tatsuko, it’s nice to meet you ^^
feel free to ask me lots of questions i’m quite open and love to chat!

a23L Jul 3, 2021 2:31 PM
bsd is definitely a comfort show with the animation style and characters and everything

yes I kin atsushi, he gets a lotta hate tho which is kinda sad but oh well :< ooh apologies for my unknowledgeable brain but who's mitski? I've seen her name floating around a lot in the bsd fandom tho!
YEEE YOSANO SUPREMACY >:D

ahh that's interesting! chuuya really is cool tho I like his style. yeah I feel really bad for akutagawa because I see most of the time he's just trying to get dazai to notice him and validate him and seeing atsushi get treated differently by dazai really hurt him, poor akutagawa T^T

a23L Jul 2, 2021 8:48 PM
dangg twice?
my favorites would probably have to be atsushi (because i relate to him a lot, his backstory always reminded me of mine), ranpo (just cuz he's smart like that LMAO HE DOESNT EVEN NEEDS ABILITIES), oda (ability is swag and he swag 😎 ), and probably yosano cuz shes such a badass

i see your favorites are chuuya and akutagawa! any reasons why?

yeahh its really good :] let me know if u ever get around starting it!
All Comments