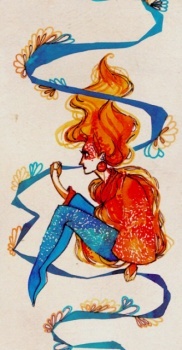 I haven't seen it. I assume it's good since you're asking.

Smoked fish is definitely the best. It's kind of sad that tuna is going extinct. I was just getting hooked on tuna salad too.

I can understand prawns and oysters. They're not my favourite type of seafood. Crab as well for that matter.

BlueOni Aug 27, 2010 11:00 AM
Yeah. If you live in Norway you can't avoid it. There are some types of sea-food I don't like, anything with cod for example, but mostly I like sea-food.
It wasn't always like that though. The only sea-food I've always liked is smoked salmon.

Do you like sea-food? I suddenly want some for some reason...

BlueOni Aug 27, 2010 4:13 AM
I don't know if I would agree with that if I got cancer myself but I'm a bit of a stoic so I'd just suffer my way through as best I could anyway.
But yes, I hope Kon didn't suffer all the same. From what I gather it was only a couple of months and there is medication to make it less painful.

BlueOni Aug 25, 2010 6:01 AM
I think I remember hearing something about him having cancer a while back but I was not expecting him to die so soon.
I guess it's like with the headmaster of my old school. One day he suddenly just wasn't there and two days later we were told that he was in the hospital being operated for cancer.
Just a week after that he was dead. Really unexpected.

BlueOni Aug 24, 2010 8:55 AM
Hello again. Sorry for the long absence. I've been busy running around in the norwegian mountains. When I was done with that I moved to the capital.


A friend of mine said Inception was the best movie he had seen. I would'nt go that far but I really like it.

BlueOni Aug 14, 2010 2:44 AM
Most of the movie's second half was pretty intense but that fighting scene is one of the best I've seen since the matrix.
If you're refering to the scene I think you do, those who didn't wake when the truck crashed didn't do so because they were stuck in limbo. They either died in the third dream and ended up there or went there to save the ones who did die.
But still, the fact that the children wear the same clothes in the entire movie is kind of disconcerting, yes.

BlueOni Aug 6, 2010 3:51 PM
Oh yes I agree. I loved the concept to bits. I was completely engrossed in the movie while it was going. I really liked the fight sequence in the hotel when they were floating around in weightlessness.
I had a hard time deciding what to think about the end but I ended up thinking that it wasn't a dream. Like I said though it was a hard choice. Who would profit from putting him in a dream like that? I can't think of anyone. On the other hand Saito seemed to have just a little too much money.
Despite the weak plot it was a fairly complicated movie I think.
All Comments