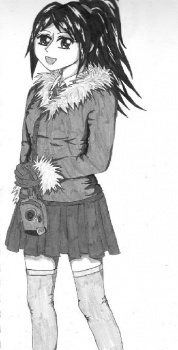 TheSubtleDoctor Mar 2, 2012 8:34 PM
Yay-uh! That show is so good. You know how I feel about Mrs. Nome, but I couldn't help but be annoyed with Ranka. To be fair, though, she is a lot less aggravating in the movies. You can download them on any of the big torrent aggregaters: bakabt, nyaa, animesuki, tokyo tosho, etc.

Any plans to see other Macross shows? I would actually suggest the original series, Super Dimensional Fortress Macross (and its compilation movie, Do You Remember Love?) because it is the most similar to Frontier...it is also better, imo =).

Macross's appeal isn't necessarily "larger" but "broader," as in the number of different demographics that it appeals to is higher than Gundam (at least, traditionally...SEED and 00 may have bridged that gap). A Macross series will have three pillars: the backdrop of warfare conducted with transforming mecha, a love triangle and trendy pop music. Though many people, myself included, dig all three elements, lots of fans come to Macross for only one or two of these elements. These pillars of the series can draw different kinds of fans that might not be into just a mecha show, or just a show about pop music.

In contrast, Gundam has traditionally been a war story. It's all about the harsh realities of war and how it affects human beings, both those who are wagining it and innocent bystanders. For me, this stuff is awesome, but you can see how the appeal is narrower than that of Macross. It is only within the last ten years or so that Sunrise decided to add more elements to the formula, chiefly pretty, effeminate pilots, to bering in other types of fans.

TheSubtleDoctor Jan 17, 2012 9:40 PM
Macross is defo a franchise with a more broad appeal than Gundam. Frontier especially is a good iteration to start with. Be sure to watch the two movies when you're done with the TV series, as they are EXCELLENT. They retell the story with quite a few differences, and, even though I love the TV show to pieces, I like the movies a little bit better in terms of story. The new concert footage helps also.

Also: Sheryl. Best female character in anime. I'mma put it out there.

Soul Eater started out fantastic, but after the first main story arc but it's slowly gone downhill in terms of quality (at least in my book). I'm finding it hard to finish up. :< I'm only like 9 episodes away from the end though. XD

For the picture you first save it to your computer then upload it onto an image hosting site like photobucket.com It will create a code for the picture. You want to use the code with the [IMG] tag you just copy and paste the code where ever you want it :)

Just informing you that CAA now has member cards!
You can get one Here

Sweetpea Sep 19, 2010 6:07 AM
Really?.... as cool as I think that is, the story is so full of detail and little things that I can't help but feel that it would be rushed and just not as good as a movie. It would be better if they were making a live-action drama, which would give them more time for the story.

-also, AWESOME about the Kazehaya thing!

Sweetpea Sep 11, 2010 6:34 AM
I can imagine- that tends to be my preference, too. But the anime had to end inconclusively- the manga is still ongoing. The plus side is that the romance isn't rushed, so you really do see how, little by little, they come to realize their feelings for eachother. It's adorable!

Sweetpea Sep 1, 2010 7:45 AM
Yo! I have seen the anime of Kimi ni Todoke. It is pretty nice! I've thought of picking up the manga, since the anime ended without a real conclusion.
All Comments