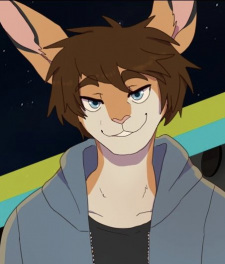 Seiya Oct 13, 9:46 AM
Congratulations on your new single reaching all the way to #11 on the charts!

Kishbokai Oct 10, 10:56 AM
Update on the Gundam thingo
Sorry I took 5 months to finish it. My attention span is weird like that, but I can say that I really enjoyed Gundam, and I'm excited to see way more of it. It will be a while before I start Zeta Gundam, but when I do, I will be sure to finish more of Gundam

How is it for you these days?

-YaoiBoy- Oct 9, 12:07 PM
Then I hope it will be a nice experience for you :) I kind of lost motivation to enjoy or analyze anything after the 2nd movie, so for me it was mostly "when will it end already?!" lol But that's just me, of course.

Loving the new Angel Dust pfp. This is easily the best one you’ve chosen, and it’s a nice contrast to my own.

-YaoiBoy- Oct 6, 12:26 PM
Yeah, I can understand that :) desperation and search for comfort can do that.

Off-topic again, but why can't they just make a BL version of NGE with Shinji and Kaworu? lol I'd definitely watch it with more passion than this remake, whatever purpose of creating it even was to begin with. I mean, I was never an NGE fan from an enjoyment perspective, with that bitch Asuka always ruining everything for me and some other things I didn't like, but those remake movies are just weird, for lack of a better word.

Desolated Oct 6, 10:47 AM
I see. Was it due to the past that you said before? Still understandable even if it wasn't.

I don't think so? A lot of people here in Indonesia are pretty anti-semitic though, mostly the islamists because well, they have the idea of "muslim solidarity" and that Judaism is "false religion" or something like that. They're usually not that politically informed as well, they just believe in pan-islamism and don't know the world geopolitics, etc. I myself haven't been called anti-semitic though, probably because I rarely.hang out with normie democrat/republican people.

And yes, a lot of asian countries have it to be fair, not just China. Here in Indonesia, it also exists.

Oh so you're thinking that a lot of rich people are kinda like Epstein? It's possible, it's just we don't know all who's like that. I'm an outspoken anti-zionist as well to be fair, and I think a lot of people here in forums also know that. Though, I'm not into conspiracy theory to be fair.

And it's fine. Just whatever suits you.

I guess so, there are lots of information regarding China that contradicts one another about China, North Korea, and so on. So one can get information which says one thing about them, and then another news that says otherwise.

To be fair I'm asking about the Hetero one because I kind of want to know if they're also censored like that as well or not. Because if yes then, it's just their laws against "pornography". I For games and stuff, I guess I only play Honkai Impact 3? A mainstream game yes, but a lot of my irl friends also play it as well so, yeah.

Same, I hope things got better for all LGBTQIA people. Speaking of which, I guess you might have some point because like, there are a lot of my friends in discord server who also had the same experiences of being sexually abused as well.

Ah, nice to hear that. Perhaps so. May I know what's your "controversial views"? I haven't seen you being that outspoken about it before I think, so yeah. Idk. I myself only got active in forums for like few months but I somehow already got quite of a reputation. Probably because few people here holds the same Marxist-Leninist beliefs like I do,.lol.

-YaoiBoy- Oct 4, 1:07 AM
I see. I always failed to comprehend why people turn to religion. Are they really unable to come up with their own set of ideals and principles, so they desperately need someone to tell them what to do? Or are they unable to handle their substantial emotional hardships and need it as a crutch to keep on living? To me it feels exactly like that - an unnecessary crutch. You can add it to my life or you can remove it from my life and ultimately nothing will be affected, aside from it being an extra baggage to carry, a "foreign" piece of a puzzle that will never fit anywhere. But I guess I'm getting off-topic :p

Anyway, then you definitely need a good RNG :) my prayers are with you :p although that may not be the best attempt at a religion-related joke, considering the situation, sorry :)

Desolated Oct 4, 12:05 AM
Idk what you mean by globalist tbh. Seems like right-wing conservatives also loves to talk about them. Do you mean the imperialists? If so then well, as an ML, they're what we hated the most, moreso than a racist or sexist person.

Idk why you'd assume that China would do just the same with the US or even worse tbh. Historically, the US has done this to a lot of countries (Latin American, Indonesia, Afghanistan, Egypt, Libya, Syria, Iran, Guinea, etcetc). China has never done as such. USA has a lot of military bases around the world including faraway places like Japan and South Korea while China only owns at their own borders and neighboring countries that's allied with them. And so far, even under Xi Jinping, whose policy is more blatant compared to his predecessor Jiang Zemin and Hu Jintao, there are no operatives of China in trying to destabilize the economy of an independent country, unlike what the US did. Iran's government is anti-communist yet they're good partners with China.

I see, well it's a matter of taste really. Just enjoy want you enjoy~

Yep, I'm a survivor of a sexual harassment by a gay person as well to be fair. I think it might be due to few people aren't able to coming out of the closet, that some people have less option they opted to sexually abuse random people. So yeah, I guess more people coming out might be a good thing, because it adds their pool of partnership. As an ML though, I have to say that it's very undialectical to groom people, smh.

Is there anything I can help you with? Are you perhaps still traumatic about it? There, there. I can accept you for whatever you identify with. Make yourself comfortable~ ;)

-YaoiBoy- Oct 3, 4:40 PM
I can definitely see it being restrictive. Are they actually religious or is it just a metaphor? :)
All Comments