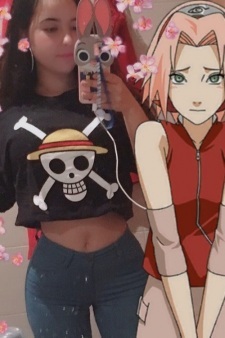 have you been watching anything good lately?

I also like some of ur fav anime like Digimon, Haikyuu, AOT, Demon Slayer, MHA (havent seen the others yet)

u got some nice fav characters aswell

I hope your doing good,
greetings from Germany :)

Ana_Suzuya Apr 25, 6:11 AM
There is nothing worse than a man writing a female chracter's development.
There are a lot of ppl that round up her abilities to ''reviving a fish'' and it's honestly very amusing to see the same ppl worshipping hinata who is barely in the manga and has contributed to way less thing than sakura.
(the naruhina or hinata moments are nearly all from fillers)
In the last databook it is said that sakura is the strongest kunoichi meaning that she, a normal girl with no background, has gotten to the point of surpassing others that had been granted with fame and power from their clan.
I think that the main mistake that kishimoto made while creating her was making her think of sasuke 24/7, like this isn't normal, i have no idea why he thought that a girl can't get over a guy. I honestly think that it's a little bit misogynistic.

Ana_Suzuya Apr 24, 1:33 PM
I know right !
it's so rare to see a sakura fan that most ppl think that we dont exist(*cough*nuxtaku*cough*)
i've been rantinfgto my friends about her strong side but non of them takes it seriously it's frustrating especially when that "sakura is useless" meme is always hanging around bc it's one of those well known phrases that is in every weeb starter pack >:(

Ana_Suzuya Apr 24, 9:23 AM
Thank you so much for accepting my fr!
It's nice to meet you~ :D
The moment i saw that you like sakura i was like "this person has to be my friend PERIOD" XD

Thorf Apr 11, 4:59 AM
Nothing much either, just watched a movie.
All Comments